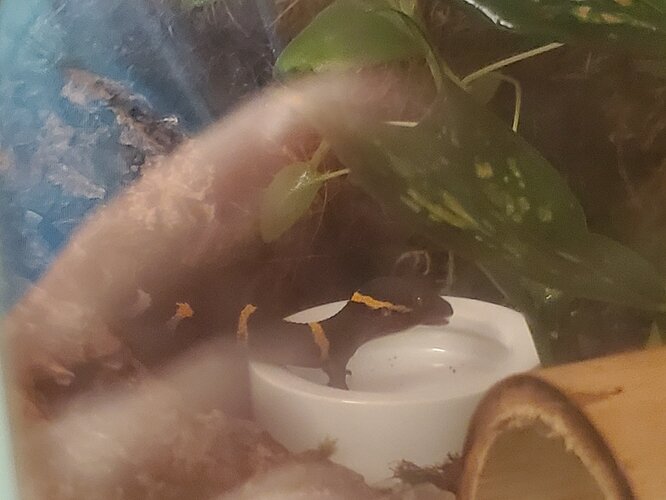 Man I cannot wait until I move & am in a situation where I can have a cave gecko! I am so jealous! How big are they? Are they docile at all? What does yours eat?

They can get up to 7in as a general minimum from what I’ve read. Also heard they can reach 9in. Mine definitely isn’t aggressive, but he is very shy. He’s still a juvenile tho so he might calm down more when he grows up. They’re insectivores, he eats dubias, bsfl, and all of the powder orange isopods I put in there as a cleanup crew…
He didn’t eat the dwarf white isopods tho

I don’t feed crickets because I need to put his food in a no-escape dish so I know he’s eating. I also don’t feed very hardshelled foods like mealworms or superworms since these guys like it cold (the exception of course was those powder orange isopods…)
He’s too small for any waxworm and hornworm treats I can get my hands on, so I’d have to save those for when he grows up.
I’ve heard of them being compared to tarantulas due to their photosensitivity. Feitan used to not come out until all lights were off, I’d turn the lights on and snap quick pics before he’d run and hide.

I love those no-escape dishes! They aren’t super cheap, but so worth it. Man, I just can’t wait to try a bioactive setup! A cave gecko sounds like a pretty good candidate for one too. In terms of cooler temps, I’m pretty sure that I’ll have a cave gecko and a satanic leaf-tail within approximately 5 seconds of moving to a place with reliable A/C.