So my girlfriend has been wanting a Rough Neck Green Snake for years now and only recently did I find a breeder who managed to produce captive bred Smooth Green Snakes. While not the same species I know their setups, food needs, ect are basically the same. And I’ve done a fair amount of research off and on through the years about keeping these guys, but I do have a couple questions.

I’ve found that the best food for them is wax worms or other soft-bodied larva. They do not do well on crickets. They do require UVB and you will have to use a lamp. UVB does not penetrate glass. Do not keep them near a window, it will wreak havoc on your temperatures. As for cage size, the bigger the better with these species. 18”x18”x24” should be sufficient for adults.

@westridge thanks for the help! I was thinking of this spring working on raising caterpillars or maybe earthworms. But since its so small I was gonna keep it on pinhead crickets for a while until some more size is gained. Another breeder friend offered the idea of Dubia roaches…

But I have to be careful about keeping insects full time like that since I’m in an apartment. While I know Dubia roaches, crickets, ect aren’t a hazard to keep in an apartment not sure my landlord would think the same.

Wax worms aren’t meal worms are they? They are a beetle larva but not the same? And do you know of any sellers that will ship smaller manageable quantities of soft insects?

Can those be fridged to keep longer similar to meal worms? And what are the relative sizes of those in comparison? I have to be careful on prey size with this snake. And they require lots of smaller meals rather than one occasional big like most snakes. Another question would be can the moths be used as a food item as well? I’ve never had to deal with insect eaters before other than one beardy years ago and he always just did crickets.

I do not recommend using dubia for green snakes. Not sure if they would eat earthworms, but I doubt it.

Any particular reason on the Dubia or just they get to big/to much chitin?

Green snakes do not do well with hard-shelled insects. It’s the number one mistake people make when keeping them. That and not providing UVB.

Already ordered the size tank you suggested, UVB, and heat bulb. I’m gonna do right by this little one you better believe it. If I can tack down a good reliable food source that won’t break my pocket price wise or end up growing to fast to where the snake can’t handle it we will be golden.

Wax worms and hornworms can be small, neither can be fed as moths since they are way to big and I would think they would be hard for the snake to catch. Waxworms are around 3/4" in length and small hornworms are like 1.5" in length, both are under 1/2" thick, waxworms being thinner. Waxworms can be kept in temperatures at 55F and last for 8 weeks until pupating, I’ve had luck keeping them at around 48 but the survival rate is higher if they are kept warmer, hornworms grow extremely fast and can be kept in the fridge as long as they are only in the fridge every other day or less, the fridge would slow down their growth but they would still need fed very quickly, a dozen would probably need to be fed in under a week so they don’t get too big.
Mealworms shouldn’t be fed often because they are high in chitin, dubias are soft-shelled insects not hard-shelled, they don’t have much chitin which is why they’re such a good leopard gecko staple feeder and would work for green snakes.
As far as size comparisons, normal mealworms(not giant) are similar length to wax worms but the wax worms are a lot plumper. In comparison to giant mealworms, wax worms are shorter but under twice the thickness, also wax worms are squishy so they look a little bit bigger than they actually are.

I know with lizards feeding horns and wax worms are supposed to be more of a treat rather than a staple. High fat or something I’d assume? And @westridge had mentioned dubias not being good for green snakes at all.

Hornworms are pretty healthy and nutritious, waxworms are very fatty and not a good staple but since you can keep them a long time then they make a good variety in their diet if you were to feed them every three times or similar. The best soft-bodied insect would be silkworms, depending how many you use you might want to think about starting a silkworm colony though I don’t know if that would work since you live in an apartment. I’m pretty sure @westridge only said that because he thought they had a hard exoskeleton(chitin) when really they have very low chitin and don’t have a very hard exoskeleton/body.

Thanks guys for giving me options to weigh. I think in the long run with this snake variety is gonna be the spice of life so to speak. I’m gonna use crickets for now since that’s what the baby is used to but when he gets bigger I’m gonna try and introduce some silkworms and wax worms as well. May also try buying and raising safe nontoxic caterpillars as well. Worse comes to worse with that I’m releasing native butterflies/moths. Might even try tiny Dubia roaches just to see if he takes to them easy enough.

All this just makes me wonder how this species deals with eating in the wild! They seem to be a very specific particular eater. Guess the wild offers much more larval food.

@erie-herps is right, I thought that dubia were a hard-bodied insect. If they are truly soft-bodied, they would work.

A little update… We got the enclosure setup this morning. Don’t have the lights setup yet (still waiting on the housing) but just thought I’d share what we came up with. 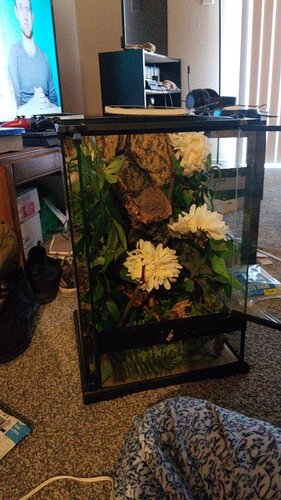 Yes it is, jam packed with sticks (we baked for saftey) and various fake leaves/vines.

Hey there @meerkatlyndz I just wanted to see which breeder you were able to find for the Smooth Green Snake. Thanks!

Happy snake. I don’t know anything about green snakes but my climbing/tree snakes (and my chameleon) all like to hang out at the very top of the enclosure. Your enclosure seems empty in the top 3rd. Maybe a nice branching stick with leaves wrapped around in the middle all the way to the top?
As to dubia, they are really small as babies. You can get a plastic tote, cut the top lid and cover it with screen. Egg crates and maybe a little coco fiber in the bottom and you are good to go. Keep it in a closet, your landlord will never know.

@aelkins Sorry to be a downer but the entire thing turned out to be a waste. Never even got my money back