Hope all is well! I have a female that a little over 2 years and around 1000 grams and I’ve noticed she likes to nest in her bedding and lay right on the tub. Ive heard this is sign of wanting to breed. Any truth to that?

Ball pythons are known to “burrow” (go under loose soil/debris) in the wild and often do so in captivity. It is unlikely that the behavior you are seeing is “nesting”. I haven’t personally heard of many species of snakes nesting (like digging one to bury their eggs, or gathering debris together). That is more of a lizard and bird thing since they actually have limbs. I believe the only snake that builds a nest is the king cobra.

So the answer to your question is no, since male BPs do it too. As do babies. A female that small and young wouldn’t be safe to breed even if she wanted to.

I have seen “nesting” behavior in my gravid ball python females, where they push all of the bedding out from underneath them while coiled up on the hot spot. 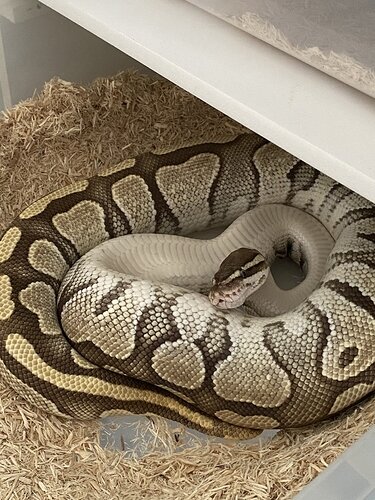 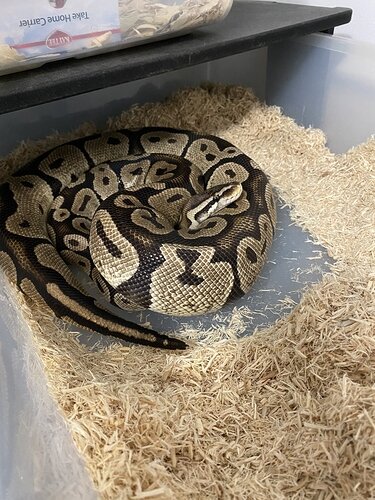 Though I will reiterate that this is a behavior I’ve seen in my GRAVID females, but as Ashley said juveniles and males will do it too.

Females wanting to breed will likely start showing building behavior (cool-seeking, bowl wrapping) and some females will go off food and cruise their enclosure like they want food, but actually wanting to find a male.
With the two females I’ve had do this, a single lock was enough to kick them back into a ravenous feeding frenzy

Also as stated, 1000 grams is certainly a bit too small for a female to be safely breeding. The general agreed weight in the hobby is 1500 grams of course, so she’s got a little while to go still