Is she overweight or just big gravid? Or both?

I bought this female from a small want to be breeder who was getting out. I’m told she has already ovulated but not had a prelay shed. They fed her large/jumbo live rats weekly in the time they had her. I feel like she’s a bit on the hefty side and planned to reduce the size of food she gets and possibly frequency as well (after she lays probably). She’s 3200ish grams, no info on age, bred with 3 males, supposedly very gravid and waiting on a prelay.

I kept contact with the seller (as they requested, plus I like to at least let them know when the animal eats the first time) and they said they didn’t see a lump. I only have smalls and pups rn since my supplier didn’t have anything bigger and had given her 2 smalls (just a little bigger than a pup, maybe weaned) f/t. I was then told she would get very upset/aggressive because she wouldn’t be full.

I feel like she’s a bit heavy and plan to give smaller meals weekly until she lays and shortly after start spacing out. I’ve always been told and read that an adult female should never need anything over a MD rat every 2 weeks if she’s healthy. Does this sound good or is she fine as is? 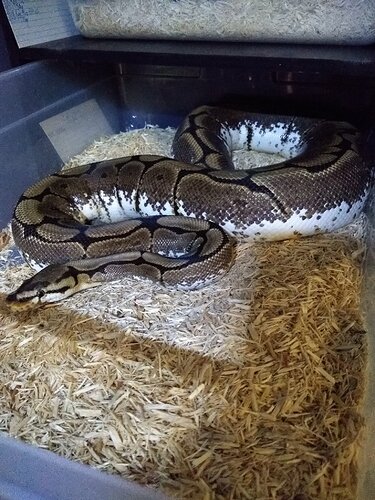 They fed her large/jumbo live rats weekly in the time they had her.

I would definitely stick to just smalls moving forward. That’s crazy they did trhat.
Could you get a photo overlooking her?

I can here in a few, but she did have the 2 smalls just last night (not that they leave a lump anyways). 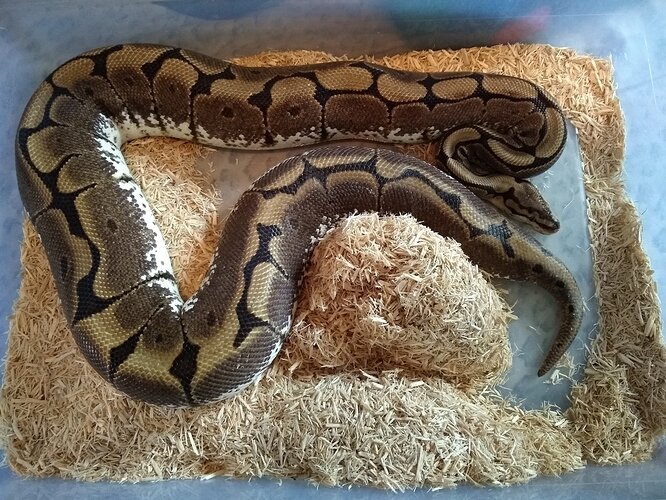 If she is still eating she is more than likely not gravid. most females stop eating once they ovulate and don’t start again until after they lay. She does look a little overweight and could use smaller more spaced out meals.

How long should I wait until I can be sure she isn’t really gravid? I don’t really feel eggs or follicles (but I don’t feel those in another female due in 25 days).

Also if smalls is all I have how often and many should she get? I was thinking 1 small per week, 2 if someone else doesn’t take

you really wont be able to feel them at this point. it is possible she might be building and that is what they thought was an ovy. you could really feed her a small every 2 weeks at this point. she is plenty big enough and doesn’t need weekly feedings.

Alrighty, thanks! Will do!