I've got a question

I have a regular leopard gecko and I need help finding another species of leopard gecko that would be a good match for it. ( make it look pretty- not have any mistakes (e.g. spider ball python) ) any suggestions? 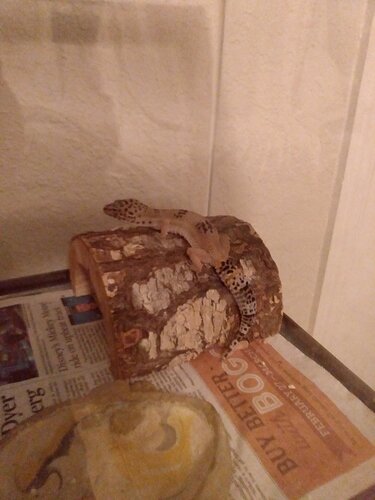 some poor quality keepers out there tho! Super spiders, super champagne, caramel albinos etc are another story.

You mean another morph of leopard gecko?

To my knowledge only Enigma and white and yellow morphs have any issues. There might be more, but I am unsure if there is.

Do you mean enigma syndrome?
Cause I have a perfect leopard gecko that’s an enigma .

Enigma syndrome was named such because the enigma morph suffers from it the most. Some individuals can be without it, but others have it. You can buy an individual without it but it still has a chance of producing offspring that will have it. Though many of the enigma on the market have no signs of ES, which means breeders are mostly offering healthy animals without it. There is still a pretty good decline in enigmas being sold as well because of ES and the fact that people don’t want to take the chance with it. Though other leopard geckos can have it in rare instances.

we got a beautiful little girl

Hi, you have a Hypo Leopard Gecko in my opinion, there is a study that count the amout of black spots in the animal dorse, it means that if you have more than 9 black spots, your animal should be considered as a “Normal” or High Yellow. I don’t agree with this specific amount, as you can see, you have a lot of yellow/tangerine in your animal.

But this is only my opinion, ok?

So, regarding a good choice to breed in the future your animal, I guess that one SHTCT or SHTCTB, should be a good animal to make a couple. SHTCT is the super hypo tangerice carrot tail, the other only differs that his head is baldy (in black spots I mean).

Hope that helps you,

You 100% should not be breeding an unknown genetic animal. If you want to breed, get two breeder quality and leave the pets as pets.

They were using that as an example for what they don’t want. Spider ball pythons are animal abuse.

@dazeyking If you want to take clickbait YouTube trash and base your opinion off that be my guest, but I would disagree. But not what this thread was about we have other devoted to the topic.

Before I say anything, I want to make it clear that I speak only from personal experience. That experience is based on being a veterinarian that works with exotics as well as keeping leopard geckos for 20 years. Also I don’t want to demonize anyone that loves seeing new morphs- I’m crazy about it too! : ) We just need to keep an eye on things, not inbreed so much, and make sure not to intentionally propagate harmful traits.

Most captive leopard geckos are the same species, Eublepharius macularius (going off of memory there, may have spelled wrong). If another kind of leopard gecko, that will generally be noted. Hobbyists should not house multiple species of reptile together. What I think you were looking for were just other ‘morphs’ or phenotypes. I can’t tell from that pic alone, but if your leo is actually male, you must NEVER try and house two males together. If your leo is female, if you permanently house her with a male, she may become stressed over time, though this doesn’t always happen. Leopard geckos do best when housed alone.

It is my personal opinion that all engimas (appear to) suffer to some degree from TES, though it may not be obvious to most untrained hobbyists or breeders. In the past, I have had a gecko with TES slowly lose the ability to strike at food, over the course of years. This is a gecko of mine that is not an enigma, and didn’t manifest signs until she was around ~8 years old. With care, she is still with us, I think she’s around 16 years old now. (It cannot be known whether this is some other neuro condition that is just exactly mimicking TES without a necropsy, or ?maybe an MRI?. But most other things that would cause those signs in a gecko would have killed her years ago.) If you only have one leopard gecko and have not extensively kept other terrestrial geckos before, I suggest avoiding enigmas. I also strongly suggest housing enigmas alone- they have a hard enough life sometimes. They seem to get very easily confused and react inappropriately to the social cues given by other leopard geckos. But mine do alright on their own.

I do not have any personal experience with the W & Y leos, either as an owner or dvm. The morph isn’t super new, but I’ve read much less about it than other morphs. This could be because of lower production numbers, breeders trying to protect their investments, or any number of a ton of other things. Either way, based on what I have seen online, I feel confident saying that W & Y leos may not be the best idea for owners newer to the hobby, or um, possibly anyone at all. Heh.

I’ve never even seen a Lemon Frost in person, but it’s my opinion that they should no longer be sold as anything other than pets (I understand why breeders are selling them off as such for high prices- they probably paid A LOT for their original lemon frost/s and are taking a big loss). Anyone buying them as a pet should understand that it must never be bred and that it will most likely develop tumors that will continuously have to be removed until they finally kill the gecko at a young age. All that said, I understand why a very few number of breeders are testing out certain pairings/etc., to see if the harmful trait can be bred out. The Lemon Frost has only be around for ~6 years or so, so I understand why some breeders feel they need more information before they are willing to let go of the morph. I am guessing that the development of iridophoromas are inherent to the morph and that they cannot be separated. Regardless, I’d have to say that the Lemon Frost is the most harmful ‘morph’ that currently exists in the leopard gecko, that comes to mind, anywho. From an intellectual perspective, I’d love to observe a Lemon Frost

Then there’s ocular stuff (Marble eyes, NDBE, BEE/Universe/Nova etc.). That would definitely be a huge area where breeders and veterinarians may not see eye to eye. SEE what I did there? Eh? My guess is that any mutation that affects the eye in a major way is probably a bad idea. The problem with these guys is that, aside from changes in pigment alone, I’d really need to hear from a boarded veterinary ophthmalogist whether the ocular mutations were truly harmful or not. In general, I’d say that it’s a good idea to have dimmer lighting for any gecko that has pink/red/lavender/light eyes (just like with albinos). Aside from that, I don’t think it’s really known what physiological changes are happening with the different eye morphs. If you want to play it safe, avoid them. And definitely do not mix them (just as you would never mix albino strains).

tl;dr = Just like in any species, purebreds have more problems. Buy a good ol’mutt. ; )

Well, that turned out long. Heh.