Hello there! I am attempting to breed Regal Jumping spiders for the first time and I am running into some weird problems.
When pairing the male and female, I make sure earlier that day/the day prior that both have eaten, and they are placed in a mutual space with lots of hiding places, and able for me to look into. The female has been chasing the male pouncing but none of that behavior from the male.
I’m confident I sexed them right, but I just can’t get what’s going on.
I have been trying putting them together since the beginning of June but, no action. 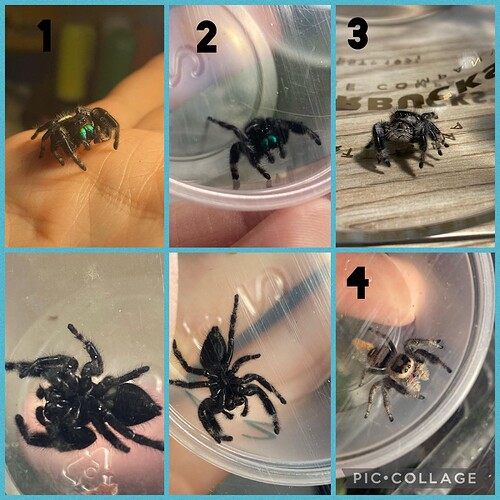 These are my breeders. 1 is the male I’ve been pairing with both females, and each time he is very shy, interested in the beginning but normally shy. 2 is the male that looks on the smaller side so I’ve been hesitant breeding that one. 3 & 4 are my females.

Female jumping spiders only mate once, and if an unwitting male attempts to mate with a female that mated previously, he risks the likelihood of being killed. Male jumping spiders take their time when attempting to seduce a female, usually waving their paddles as a means of impressing her.

She’s mated already. you’ll get a sac from her. Keep the males around.

males actually live just as long as females but they do become sterile after a while.