Recently went and rescued a female juvenile ball python, which I was told was not eating. I was told she hadn’t eaten in a month. She is a juvenile, I would guess, approximately 12 in Long. My question is this, should I put her on a normal feeding schedule with the rest of my animals? Or should I feed her more often, to try to get her to put weight on? She took a Frozen thawed yesterday, and seems to be more active than when she first got here. Also, she appears to have a blue belly, from her tail up to about 6 inches from her head. This just strikes me as weird.

The blue probably means she’s going into shed, as for the feeding, I tend to just stick to a standard feeding schedule if they haven’t been off food for a while. A month isn’t too long for a baby so she should do okay on a normal schedule, but I’m still pretty new to picky or non-feeders so I’m sure someone with more experience can weigh in here. If she’s already taken a meal from you I wouldn’t be too worried, though don’t be surprised if she goes on and off food a couple times before eating consistently. At least that’s what’s happened with one or two of my own snakes.

I mean, she is not even the least bit round. She is literally a triangle. Since she ate yesterday, she does look a little healthier.

I will share a picture tomorrow, when I can take her a picture outside in the sun.

Just keep her on a normal schedule. Overfeeding can be just as damaging to a snake as it not eating. That said, if she is just skin and bones, then it has likely been longer than a month since she has eaten. That or she never ate consistently and only had like 1 or 2 meals since she hatched.

It’s also possible that she might have more going on than starvation. She could have parasites or disease, especially as she’s a rescue, so make sure she’s in quarantine, apart from your animals. If she really is truly emaciated, it might be a good idea to take her to a reptile vet. I don’t know about reptiles, but in mammals refeeding syndrome can be deadly, and emaciated animals have to be slowly re-introduced to food.

With snakes I don’t generally think refeeding syndrome is a thing. My BP went off food for 2 months and didn’t feed consistently for nearly a year and was very thin, but suddenly decided she wanted to eat everything that is mouse/rat shaped. I fed her on a 7 day schedule and she is perfectly fine. They go for long times without food in the wild, and them being without food for a long time is something they are evolved for. I doubt it can have any negative effects like what you see in mammals that aren’t adapted to deal with fasting for long periods. I have also heard of BPs going off food for a full year and going back on food and being perfectly fine after.

I have also heard of BPs going off food for a full year and going back on food and being perfectly fine after.

I’ve seen that first hand with some of my friends who breed. One of my friends had a male Ball Python go 17 months without food, that snake weighed about 1600 grams before he went on a fast. He lost about 150 grams during this time, which is nothing for not eating for that long and was still very healthy and active. After he went back on food, no health issues were present.

Can you post pic of the ball python so that we all know what we are working with?

That’s kind of what I was thinking. If it had really only been a month than there wouldn’t really be much to worry about, especially if the animal started out fairly robust before it went off food, or had been a decently consistent feeder. Sometimes people have a slightly different view of what “extremely skinny” is, so a picture would definitely be helpful.

For a truly skinny/emaciated snake, would it maybe be beneficial to start with a smaller meal twice a week for the first 2-3 weeks and then gradually switch over to one larger meal a week (since it’s a baby)? Or just start with 1 a week like you suggested?

I will post up pics later today, when i get home. I’ll keep you guys posted

I’m just glad she took a meal the other day. She also has a sunken in tummy. Is this from not eating for so long?

I know that a boa is not a ball python, but my boa Kai stomach gets a crease down halfway his body. that is about 7-9 inches 2 to 3 days before he goes into blue, and then 2 to 3 days after that he sheds out. 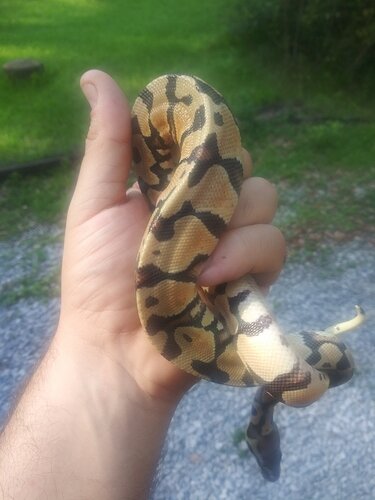 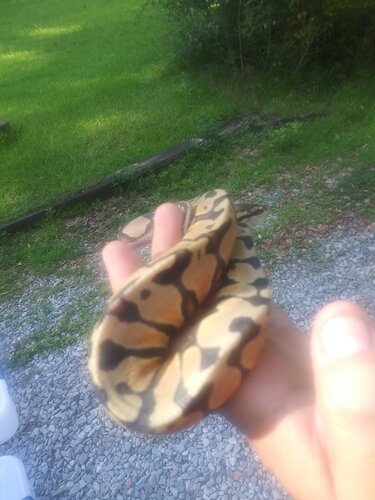 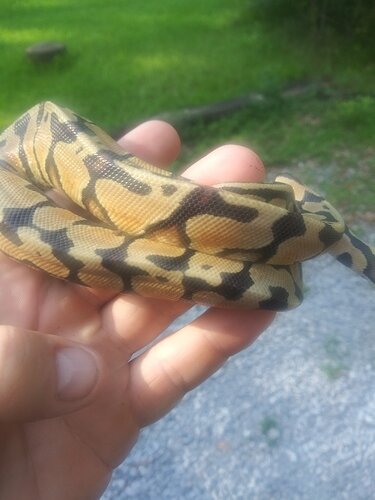 This is the rescued female ball python. She was given to me as a pastel. She also regurgitated the Frozen thawed Mouse.

How long have you had her? She needs to settle in for a at least a week without being disturbed to not have as high of a chance to regurgitate her meal, and no messing with her for 48 hours after feeding along with having her in a quiet dark place. Now she will need 2 weeks to recover from the regurge minimum. I have seen BP thinner than that survive longer than 2 weeks. And no force feeding since she knows how to eat.

@nmarcellus Given she just had a regurge and will have a higher chance of regurgitating now, small meals twice a week would probably be a worse idea. Instead try smaller meals once a week until she keeps food down consistently.

I picked her up on Wednesday.

Do you have a thermostat hooked up to the heat mat? Since you didn’t let her settle in for a week it could be that, or it could be from lack of heat. Now she needs to be left alone for 2 weeks while her throat heals.

Yes, i have a thermostat ran to all of my tubs. Even my quarantine rack. This is my first rescue, so I’m trying to learn how to nurse her back to health. It’s my fault, i didn’t check the heat mat before going to bed last night. I’m glad she did try to eat though.