I have a 9 month old western Hognose, and when I first got him (roughly 2 months ago), he took pinkies from tongs with no problem. After the third feeding, though, when I try to feed him he hisses and bluff strikes at the tongs themselves. It’s definitely different than a feeding strike; he even moves away from the tongs if I move the food closer to him, and it really seems like he’s afraid of the tongs themselves.

I’d read that some Hognoses will only eat amphibians, so I got him frog Reptlinks, but he won’t eat those either, and keeps attacking the tongs. I’ve tried leaving the pinkies and reptilinks in his tank and left him alone, but he won’t even go near the food. I thought I might be over handling him, so left him alone for a week before trying to feed him, and he still attacked the tongs.

I’m out of ideas - has anyone experienced this or have any ideas?

How big is he? And what does his setup look like?

I would assume he’s still relatively small, so if he’s in a large enclosure it may be stressing him out.
Pics and more info would definitely help!

I haven’t read through the entire thing so far but just want to answer the title. No snake is ever afraid of eating. They all have the natural instinct to eat and will not starve themselves if they dont have to. If it doesn’t want to eat then it is a indicator that the snake is still either settling in or something is off about its setup.

He’s about 19 grams. I don’t know anything about his previous owner or his setup with them.

Can you tell this is my first snake? 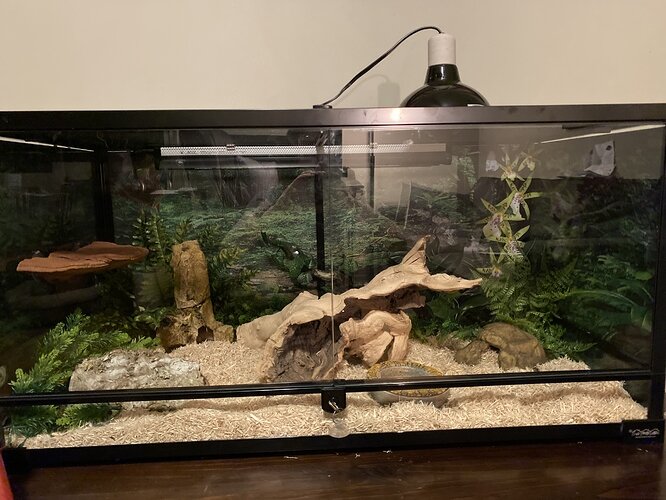 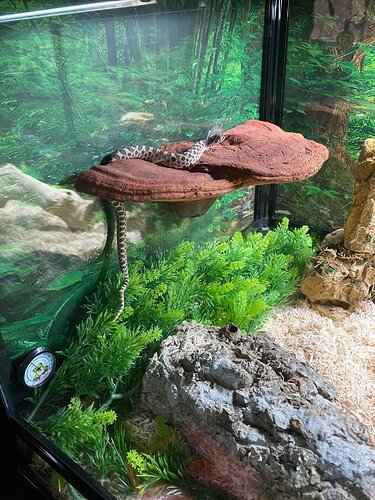 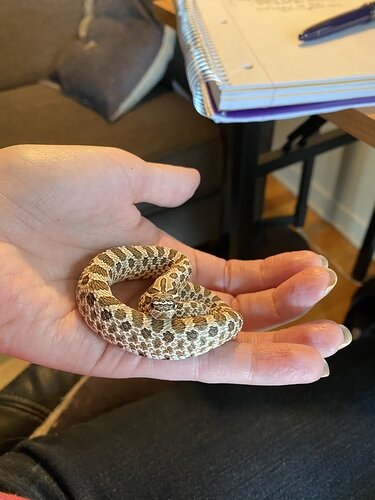 Yeah, you’re right - I definitely could have worded it better. He just bluff strikes the tongs I use to feed him multiple times and then moves as far away as he can, and won’t eat his food when I leave it in his tank. Every time.

His enclosure is way too big and open for a baby that size. He should be downsized to no more than a 20 quart tub so he feels safe. The temps on the hot side also don’t need to be more than 90°F. Male hognose are said to make bad pets as they go off of feed a lot as well. Everyone I know only recommends females as pets, and never a male as a first snake.

@ashleyraeanne Is there any way to make his current cage less stressful for him? I’ll get a new cage if I need to, but if I can make what he has work, that would be great.

Re: male hognoses aren’t good first snakes, I do always seem to choose the hard way. I got him from someone who was giving him away because her roommates didn’t like him

Only way would be to give a ton more cover. Make it seem cramped with how much cover you give, and give more tight 1 entrance hides. Take the temps down a bit too.

@ashleyraeanne not to be dense, but you mean basically cover the entire floor with hides and plants, right? Or is it more likely that it’s a better idea to just take him down to a smaller size now and move him back to this cage when he’s older?

Smaller size would be easier over all, yes. But if you want to try then yes, cover the floor with fake plants and hides, give a canopy of fake plants basically. More bedding so he can make tunnels would also be good.

@ashleyraeanne thank you! I’ll get it fixed up for him. Cross your fingers that I can get him to eat soon!

Best of luck! And if he still doesn’t eat I would encourage you to try a tub setup.
It’d be temporary until he’s feeding consistently and is a bit older/bigger.

Try feeding him in a small round container that is opaque or completely covered. Check out "snake discovery " on YouTube. They work with and breed hognosed snake. Also, I disagree about male hoggies making bad pets. A lot of snakes will stop eating, or be picky. I really like male hognose snakes,especially when they get into the hissy stage.

@stewart_reptiles Has stated that they are notorious for going off food/being difficult to get eating and has also stated they do not make the best pets (especially for a new keeper) and females don’t seem to have these issues. Given they breed hogs, I trust their judgment.

We shall have to agree to differ. What makes a good pet is a judgement call and since the OP allready has a male hognosed pet snake it is a moot point anyway.

if it were me, I would move him to a 6 quart tub set up until he’s bigger and more established. I don’t move our yearlings/subadults to their adult tubs until they’re 50 - 65 grams. Get the hot side down to around 90°F, his ambient down to around 76°F. Once you’ve moved him to a smaller setup, I’d refrain from handling him for a week, give him time to settle in. Then I’d suggest trying to feed. You can try leaving the pinkie in a small length of PVC pipe or toilet paper tube. Sometimes they like their privacy when they eat

I don’t notice much difference between our males and females with regards to temperament and appetite. They all have their individual personalities, same with good days and bad days. I have yearling females that will only eat every 7 - 10 days, I have adult males that will eat every 4 - 5 days if I fed them that often.

Thank you! I’ll check them out!

Thank you! I wished I’d known to wait until he was that hefty! He really is the sweetest little guy, he has a wonderful temperament, apparently just feels the need to give me heart attacks with hunger strikes. Praying he likes his new tiny set up (coming soon).

Thank you! Definitely working on the temps.