Whether you’re keeping bearded dragons, small monitors, geckos, or any other insect eating reptile or amphibian it really does not make sense to purchase crickets from a pet store for upwards of $0.10/cricket unless you only need a couple dozen a week. But if you are feeding growing babies or large collections you should be purchasing your crickets in bulk so you can feed your animals properly not just the handful a week you can afford because at 0.10 each every 10 crickets costs you a dollar, every 100 crickets costs you 10.00 and and every 1000 crickets costs you 100.00. With just a couple of growing bearded dragons you can easily go through 1000 crickets every couple of weeks if feeding properly. Now of course I recommend feeding your animals as wide a variety as you can in their insects so maybe you don’t need so many crickets every week, but if you can keep them alive longer then you can still benefit by purchasing your crickets in bulk. If you only have to purchase 1000 every 2-3 weeks and it saves you on trips to the store as well as money on the crickets that’s still a plus as I see it.
So if you’ve ever wondered what the trick is to keeping large amounts of crickets alive is, or you’ve been afraid to order bulk because you’re afraid they’ll die before you can use them then pay attention to this. For about 30-40 dollars you can build a cricket bin that will allow you to keep several thousand crickets at a time and keep the vast majority of them alive until their natural death at about 8-10 weeks of age.
There are a few things you need to remember when keeping large amounts of crickets for extended periods.

Below is my newly completed cricket bin to show you an example of how one can be put together. This one is a Rubbermaid brute tote with the bottom cut out and replaced with a pice of light diffuser cut to fit and wrapped in aluminum screen. Then I siliconed around the edges of the screen to ensure there are no gaps for escapes. The container on the bottom is the catch-tray for the waste. You can use whatever containers fit where you need them to fit. I suggest using a container tall enough that the crickets can’t jump out to easily when retrieving them to feed your animals. 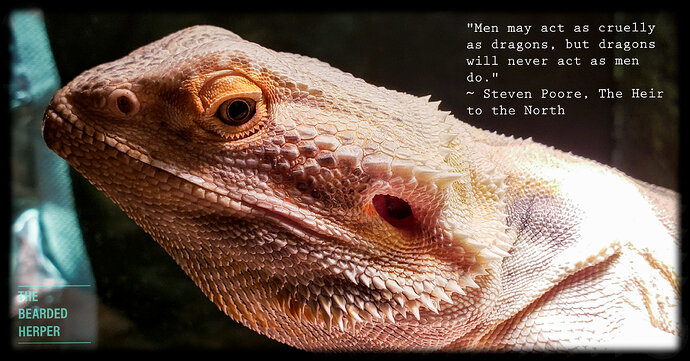 I don’t keep any animals that eat crickets right now but if I ever need to in the future I will definitely be using this idea.

3000 crickets housed comfortably. Maybe 100-200 arrived dead, but at a cost of roughly 0.02/each thats only a couple dollars worth at most and with a 10% over count to begin with I still probably have about 3100 crickets in reality. In many cases the more you order the more the price drops, and you can end up getting them for less than .01 each making them far more affordable than if purchased at a chain pet store.

I know I have kept crickets in the past. Given how smelly and loud they are, if I do get an animal that needs bugs I will probably go with dubia roaches as the main bugs I feed given they are more nutritious. That way I can breed them too. Do you have any tips on dubia keeping as well?

@ashleyraeanne As I stated above the setup above can almost entirely eliminate the odor associated with ceixkets which is typically caused by excess moisture and bacteria build up. As for noise thats an easy fix as well as you can now purchase banded crickets who do not grow wings and therefore make no noise. Unfortunately I can’t offer too much advice on roaches as I’ve had very limited success breeding them, and while they are a superior feeder when compared side by side I will say that the large majority of animals should be fed as much variety as possible including those who eat insects. Each insect has something different to offer to the diet and none are truly balanced by themselves. Currently for my insect eaters I am maintaining crickets, hissing cockroaches, black soldier flies, and attempting to restart a dubia colony. They also get super worms, horned worms, canned grasshoppers, and dried june bugs. Dubia and other roaches present other problems as i see it; they hide quicker and can become household pest if they escape which usually means they are fed to the animal from a dish or tongs. This means the animal is not getting the exercise it should during feeding. If a cricket escapes the most it typically amounts to is a temporary nuisance. And crickets tend to move around the enclosure much more actively allowing the animals to forage more naturally, especially if the enclosure allows for it.

edit: I stand corrected, banded crickets do have wings but they are much smaller than the wings develeoped by the common brown cricket and therefore produce significantly less noise.

From what I have read it is hard for dubias to escape, and they are far less capable of doing so than crickets. They also don’t pose a threat to the lizard they are fed to since they won’t eat the lizard given the chance if they hide/don’t get eaten. I know they need a varied diet, and I will usually stay away from bugs higher in chitin since it is hard to digest (so dubias, silkworms, hornworms, BSFL, and flightless fruitflies for tiny babies) I do want to try my hand at breeding silkworms someday since they are some of the best, but also harder to find feeders out there. They also don’t come with the usual heebie jeebies of other bugs since the adults are just fuzzy moths, and I have a bunch of mulberry trees around my house so I will have all the food they need.

The only advantage cdickets have over dubias concerning escape is that they can jump. Neither can climb smooth surfaces yet still they both will manage to escape periodically. As for crickets eating on or chewing on the animals, in my experience this only happens when animals are unhealthy, kept improperly or far too many are left in the enclosure. Also, not all cricket species are the same, some are far more aggressive than others. If it’s ever a real concern you can simply leave an easier food source in the enclosure and they will be far more likely to chew on that. A chunk of carrot or potatoes usually does the trick.

I tried this but it didn’t work. The idea’s great except I did it wrong. To anyone going to try this, make sure the tubs are actually stackable, don’t try to make it work when they’re not. Also make sure the crickets can’t get through the screen and the screen is sealed to the bottom. I tried this exact same thing and replaced the top with a mesh screen and layered two screens on top of each other for the bottom. I sealed everything with a generous amount of hot glue. I also added vaseline on the sides to prevent them escaping (all I had was a textured tub). I had 1000 1/8" crickets and I had 3 egg cartons plus the two that came with the crickets and I gave them oats and lettuce. I kept it in the bathroom at first so if any escaped it wouldn’t be too hard to catch them, that turned out to be a good idea. 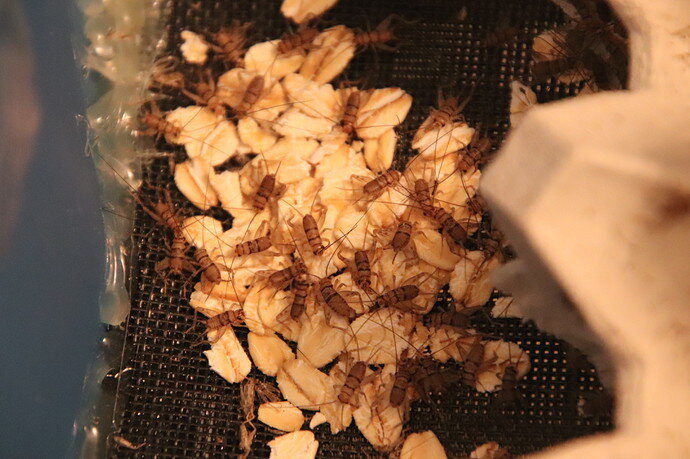 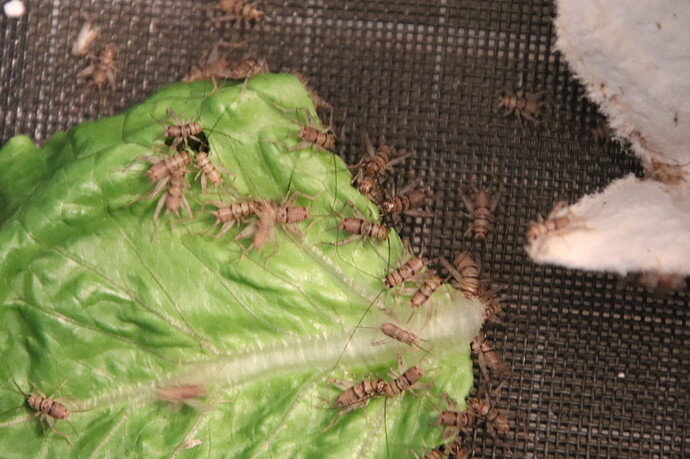 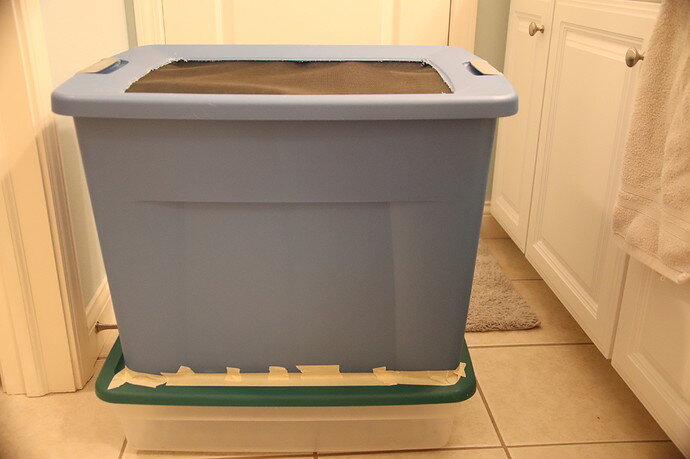 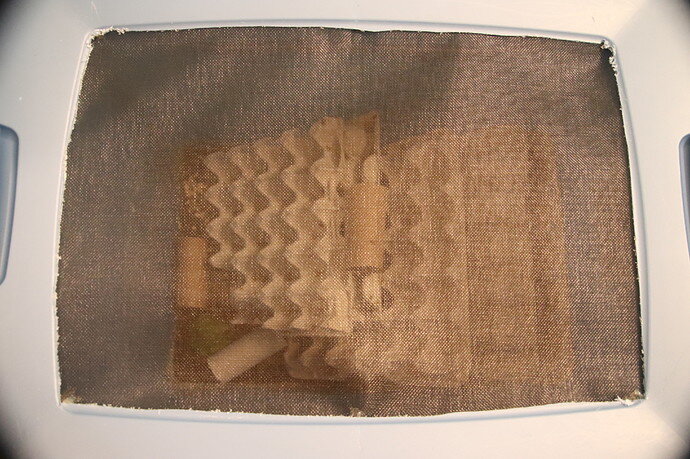 IMG_11673984×2656 2.66 MB
I added tape over the bottom of the doors to the bathroom (it’s connected to two rooms) to prevent them from escaping under it. The next day at least 100 crickets escaped from the container and they were all over the house, mainly in the two neighboring rooms. I started by sweeping them up and then moving the tub to the garage. They’re still everywhere, anytime I walk into the room I see at least a dozen on the floor. I think the problem was how I attached the tape on the sides, I think there was a small gap that they used to escape or the screen wasn’t attached right since at least a few hundred were in the bottom container. So instead of wasting everything I decided to try a new method of housing them. I put a dozen well-ventilated 32 oz deli cups in a 66 qt tub and added a piece of egg carton, oats, and a piece of lettuce to each cup. I divided the crickets I could catch in the cups. I’ll keep food in there 24/7 and keep feeding them off until I run out or they end up dying. 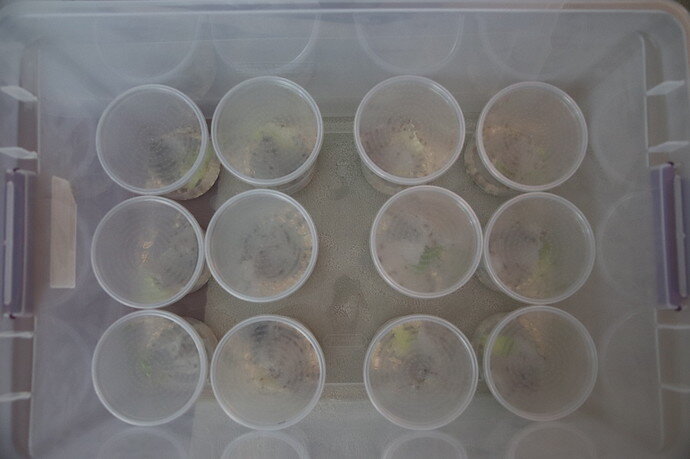 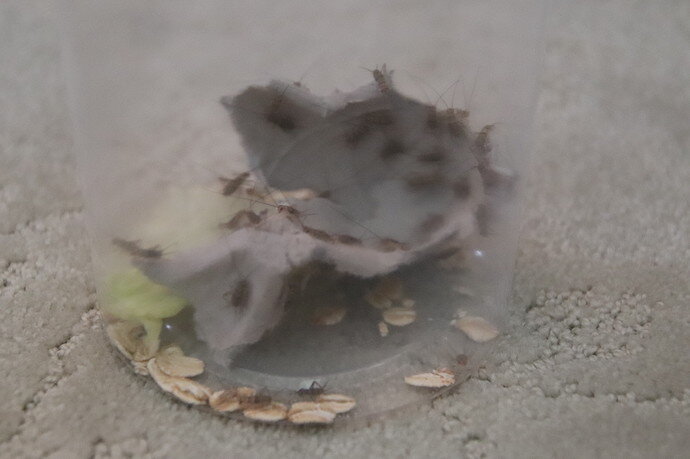 We got a big black bin with a lid as was told was a great way to keep them and dubias too, so went ahead and brought my 750-1000 bulk bag, well for one they stank so bad in the bin I wound gag every time I opened it, even with the lid half off! They can also climb the bin so escaped everywhere too. And then little fruit flies got in, laid eggs and maggots everywhere in the bin. Was a nightmare. Don’t use a bin!

I’m sticking to the big crickets keepers now. I just use masking tape to tape side top vents to they can’t escape through.

Though would like to hear of any other ideas, any fly proof?

They shouldn’t stink and they can’t climb non-textured plastic. Did you use substrate?

Here is an alternate design for you guys 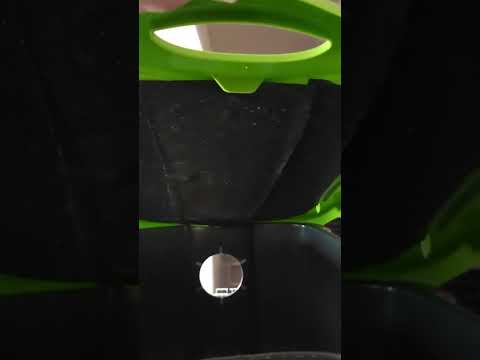 Has anyone tried keeping crickets in a screen cage instead of a bin? I was thinking screen cage with a layer of substraight and a cotton rope for water.

The main problem I think this would have is that the crickets would climb the screen towards the door and either escape out of the door or escape when you opened it.

They would also eat there way out…

If you use a bin with smooth sides they cant climb it, but if it has even a little texture they will. Smell mostly comes from moisture allowing for bacteria growth. This is why airflow is key. This method has proven 100% effective for me over the years as long as the bin isnt over crowded and is cleaned between batches (orders).

That wasn’t to you, it was about the screen cage above

Though i will say when I used a bin it didn’t go well at all for me. It stank, some died, stank more, they still somehow climbed but that wasn’t the issue.
They just didn’t live…
I don’t keep like it anymore. All in cricket tubs or ones they come in as to be fair with the amount here they don’t last.

Lol yeah i figured that out after the fact which is why i deleted the other comments.