I’ve had a question for awhile about my Leopard Gecko that I bought as a , Tremper Albino Super Mack Snow Leucistic. When I put leucistic into the the calculator it comes out as Murphy’s Patternless. My gecko has super snow spots but they are light brownish/red. They’ve appeared as he’s gotten older, will he lose these? Is Leucistic the same as Murphy’s Patternless? I have two horrible photos of him. 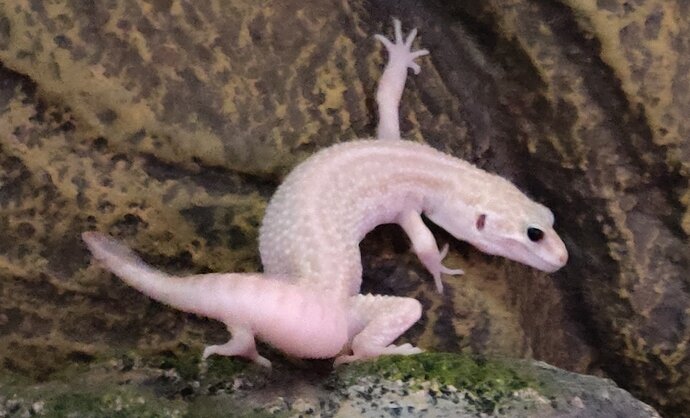 ‘Leucistic’ is just a general term for any condition that causes loss of pigment but does not affect the eyes’ pigmentation. It is not generally used to describe morphs in leopard geckos because it’s not specific. If I were to guess, ‘leucistic’ would be most likely be used to describe a blizzard, though it could be used improperly for a patternless or eclipse.

Murphy Patternless, unless I’m mistaken, does not involve pigment loss. But that aside, your wee man is definitely neither patternless nor a blizzard, as he has spots. So he is most likely a Super Snow Tremper. He may be an eclipse as well- his eyes do look solid. You’d need to take a set of crisp macro shots of each eye to get the best guess. There are several other eye-related morphs, but I’m not able to reliably identify them (marble eyes, blue amber eyes (B.A.E.), etc.)

edited to point out that he’s gorgeous!

I thought leucisim could cause loss of pigment anywhere, including the eyes. Hence blue eyed leucistic, and even pink eyed leucistic (rarely happens in rat snakes when more melanin is absent from the eyes than normal). Leucistic mammals can also have light colored eyes.

While there may be exceptions, I’m pretty certain of the general/common meaning of the term.