I was looking around to make sure I wouldn’t get in trouble for breeding rodents if someone caught wind of it. It turns out I’m in the clear there but these are my local township laws. Venomous and constrictor snakes are listed as exotic. All exotics are not allowed. I had no idea,. I guess that could become a problem. The way they word the opening in disheartening. 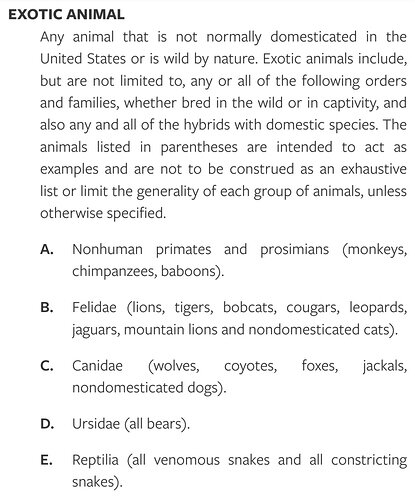 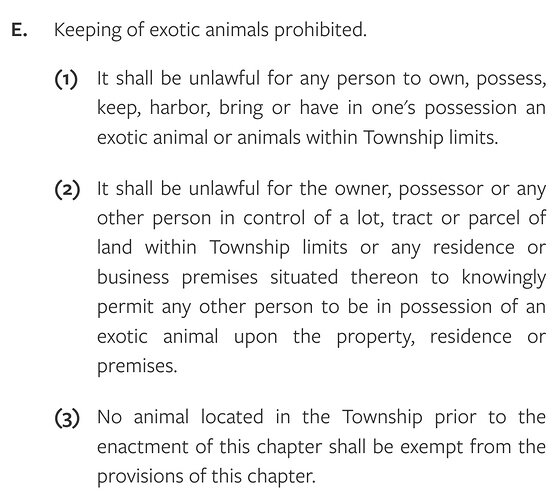 “The PA Fish and Boat Commission’s regulations do not regulate possession of non-native species of reptiles and amphibians. So long as these animals are not released into the wild, there are no state regulations regarding their ownership. Likewise, there is no state permit required to possess these animals.”

Where Im at anything with venom no matter how mild or harmless is forbidden. Im hoping to have it overturned for stuff thats venomous but not too dangerous.

They just recently allowed chickens in the township but without going into too much detail. You can have 5 chickens and for each chicken you need a 10x10 covered run and the fence must go 2 ft into the ground. Each chicken requires its own roost and have a 3x3 coop. They require it to be inspected twice before use and once a year. Also the ordinance states if you have that on your property it gives them the right to come onto your property at anytime to look at it. No one is going to go through all that. A neighbor tried to but failed inspection. All that for 5 chickens that you also can’t slaughter even for old age. I could use a change of scenery anyway

I should also mention theres other rules. Lizards cant be more than 2M full grown (6’8") and Snakes cant be over 3M full length (10’ ish) adult size. Sucks that most of my fav Mammal species (mostly wild as Carnivora is prob my fav order of mammals ever) arent allowed. Id love to try having say a fox for example. Or if I lived in a more countryside ish location like a horse or something.

I’m about half a mile from farm zoning,. I think a lot of the rules are to keep that from blending into the neighborhoods. We also have an exotic animal rescue that released a bunch of stuff late 80s early 90s. Might stem from that. I know people that have or had things in the area, a turkey, a raccoon, my one brother in law use to have a big cat and a wolf dog. That was a little while ago but it was in the area. If you’re willing to risk it and play it safe. Fines are one thing but getting them taken away is another.