One of the hardest isopods I’ve ever kept. I tried two different times and failed both times, (it happens!). I do not keep these anymore but sheesh what an absolutely beautiful isopod. Shame they do so poorly in captivity. Hopefully we can get lucky and someone gets a few captive generations in for a nice strong line here in the states. (I know a few are working with them have had some luck, but the hardest part isn’t over). 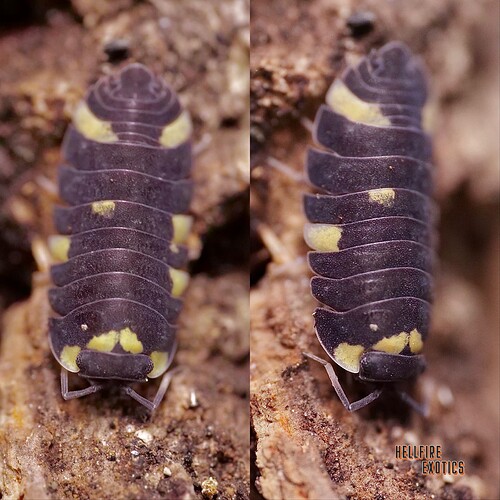 Sick! I was thinking of getting some, but if they are super difficult I may hold off for now. Gorgeous Merulanella species.

I’d say one of the MOST hardest. But never know, maybe you hold the secrets!!

We believe in you Eric!

I want that species so badly!! I didn’t realize they did so poorly in captivity, though.

The few species I’ve kept have done well so far, but it sounds like Yellow Pandas are out of my league.

Does anyone happen to know if the Merulanella ‘Ember Bee’ is any easier? I had my heart set on keeping one or the other, so I hope the Ember Bees aren’t quite as tough!

I did develop a hypothesis about why isopods colonies may crash (in addition to the buildup of waste in the container over time). With the more expensive species of isopods, we often buy 5-10 animals to start with for financial reasons. But that means the whole colony has very little genetic diversity. When I decided I wanted to try ‘Panda Kings,’ I did a little (expensive) experiment. I bought small quantities of Panda Kings from 3 different sources. Lo and behold- they are thriving thus far. I’ll have to wait and see how they do longer-term, but I suspect the increased genetic diversity will positively contribute to the health of my colony.

So far my ember bees have been thriving but these are at least F2 captive as far as I’m aware. Which plays a strong role especially with lower counts. No babies yet though. Slow growing.

Yep, and 5-10 is usually what anyone would start with. I always buy from two different sources when possible.

@mblaney that hypothesis may be correct. One of the main food sources is substrate and if that is already decomposed, there are no more nutrients that are readily available. I do a 1/2 change of substrate every 6 months to lower the risk of this happening.

The Merulanella group is scary

Most are so expensive and so fragile to care for.