So clutches 3 and 4 dropped within 3 days of each other, last night I noticed clutch 4 had started pipping. Being impatient after checking on clutch 4, and (yeah I know) assuming clutch being older would be safe to cut I was greeted with this. 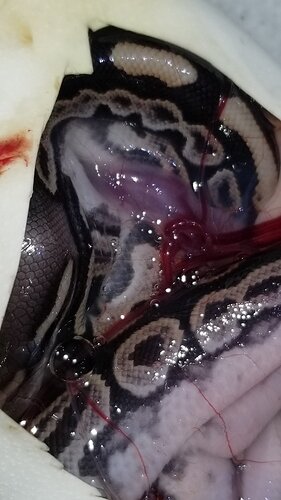 Aside from over half of them apparently prefer to lay belly up I have twins. Both are responsive to touch, but I am concerned about the umbilicus, which you can see in the photo. This is the first time I have seen an umbilical cord wrapped over any part of one of the babies so not sure how worried I need to be. I am also hesitant to mess with the egg to much and stress them out without getting some input first.

I hope everything turns out well. Gotta call on the pros for this one.

Well first I will address the following

I do not recommend cutting until the first one of the clutch pips.

Second the more you candle or poke around to see movement the more likely the hatchling will move and tangle itself.

So this was for prevention purposes in the future.

As for was to do

If the animal has indeed a twisted umbilicus I can’t really tell from the pic if it does and to what extent, it will need to be pulled from the egg and be untangled.

In some cases they can simply be untangled and keep absorbing yolk in that event do this and place the animal in a small deli cups with air holes and damp paper towel until the yolk is absorbed.

If it cannot be untangled it will have to be freed in this case you will need a rubber band, disinfectant of your choice and a pair of scissors.

First disinfect the rubber band and use it to tie a knot around the cord about 1 to 1.5 inch away from the belly, once you have done that disinfect your scissors and cut the cord after the knot.

When done place the animal in a deli cup on it’s own as above to monitor during the next 48 to 72 hours.

At that time if the animal is still alive, place a fuzzy mouse in the deli cup, if he eats on it’s own great if not you will need to assist it’s first meal.

Once that is done the second meal can take place in the same time as the other hatchlings from the clutch.

@nathan_e thanks, yeah kinda what I’ve been waiting on there’s still a bit of yolk left so just keeping an eye on them as best as I can without disturbing them. got another photo I’m going to post as soon as it finishes downloading from the camera.

@stewart_reptiles yeah, I know I screwed up, I rationalized doing something I knew better. Looks like it disentangled.

I’m confused how did you screw up? By cutting?

yes, I should have at least waited until one or more pipped on its own.