Hey! I was driving home from the barn when I came across a very large painted turtle hit in the road. Of course, I got out to see if she was save-able. Unfortunately she was still alive but too bad to save. The reason I need help is because she had eggs. She was most likely moving from her pond to her laying site, the eggs seem to be to term (laying wise). Only one survived, so I scooped it up and I’m going to try to save it. I really, REALLY need help! I don’t know what to do at ALL!!!
The egg is a little dented but not cut open. I’m 90% sure I can see veins. There’s a photo attached but I can provide more if needed.
image|375x500

Unless you have an incubator, a thermostat for the incubator, and something to set the egg in like perlite then there isn’t much you can do. Along with the fact that the impact from the car likely damaged the inside of the egg. You also need to make sure once you have the egg out that it doesn’t get flipped over by putting a mark with a marker on one side. You can try getting hold of someone that could try to incubate the egg, but chances are you won’t find one. Also, the image shows an egg that is very pink. It should be white. The shell isn’t developed fully so it likely isn’t to term.

Ok. I googled a DIY incubator that I think I may try?? I’ve moved the egg to different lighting (not directly under my red shirt lol) and I think the only pink is from mama. I’ll send another pic. I really want this little one to live. 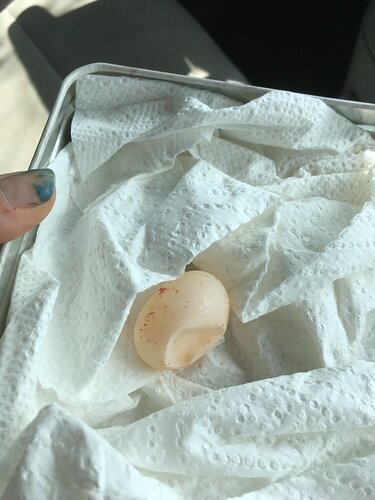 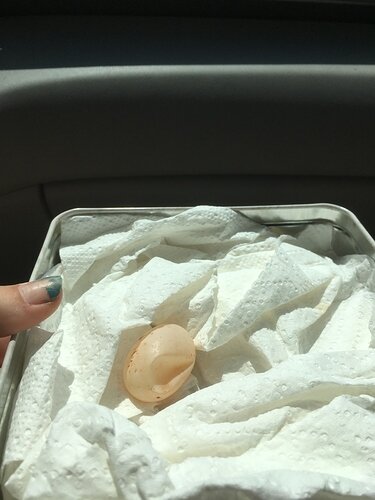 For most DIY incubators you need heat tape and a thermostat. A good thermostat has to be ordered and will take a bit to arrive, and I am pretty sure heat tape needs to be ordered too. With that big of a dent, the internal trauma from the impact, and the chance that it isn’t to term, and the time it will take to set up a reliable incubator the chances of survival for the egg are slim to none.

I know the feeling of wanting to save baby animals and eggs, just two weeks ago I had to let nature take its course with a young mourning dove because the parents didn’t come back for it after they kicked it from the nest. I left it because mourning doves have a large and stable population. Painted turtles also have a population listed at least concern. The moral of the story is you can’t save all of them. You also usually need licenses to take eggs/baby animals from the wild.

You could try a tractor supply for a small incubator and some perlite, but it likely won’t work.

It was a nice thought.

That turtle was not trying to get to a pre-natal ICU. The weather near most painted turtles will vary during days and likely drop significantly most nights. If you are anxious to try - DO something.

Your local turtles likely don’t expect tropical temps. They bury their eggs because they want a more consistent temperature. But, local temps are expected or we wouldn’t have local turtles.

Something insulated like a cooler might help. Perhaps that mama really was searching for a vein of perlite. Every garden center sells it. But, newspaper might work? If you want to add heat, maybe try a microwaved heat pad added to the cooler. You could float a nest box (ie Tupperware) in a home aquarium.

Before I’m shouted down, yes taking it to a trained professional might offer a better outcome. But, you can try many things for little to no cost. Or you could just throw it out the window. Foxes gotta eat too.

It’s the next morning. Last night I scrounged you some of my terrarium supplies and took a trip to Walmart and here’s what I have. No perlite or vermiculite to be found at any store, so I’m trying my luck with potting soil. I have an insulated cooler set up as an incubator (I’ll send pics). I’m going to try to contact rehabbers today. 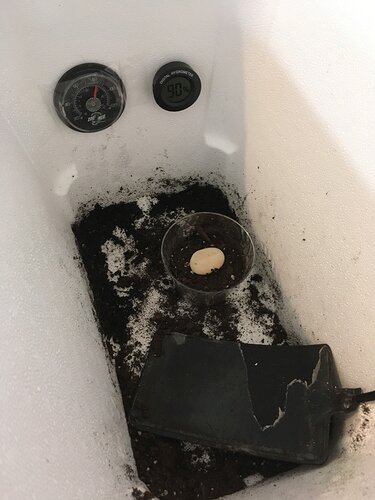 One more quick thing- if anyone has any advice on how to reduce the humidity I’m all ears! I have been able to keep a consistent temp (80-86, per Painted Turtle care sheets), but as soon as I close the lid to the cooler I’m having issues with the humidity rising. I took out excess substrate and the sponge of water I had put in there but the humidity is still rising when I close the incubator. For now I’m switching it from open to closed every hour but I’m not sure how to keep the 80%

I know I sound very ignorant right now and I apologize. I am simply trying my best to save the egg, even though I have never kept turtles before. I have had lizards and snakes though. Again sorry for my ignorance, I’m just trying to find my best options and best information I can

Edit again sorry I’m a mess:
@dlhirst - Thank you! I set up an incubator last night. I’m rooting for this little turtle even through all of its trauma, but if it doesn’t make it I figure I can try to split it and feed it to my snake if he will eat it. He typically only eats worms but we’ll see!

You can put holes in the container. Also, potting soil has fertilizer (usually poop, unless you got some without fertilizer) in it, so I wouldn’t recommend that as the bacteria and microbes could harm the egg. A rehabilitator may not take the egg due to the damage it sustained (or they may not be equipped to incubate eggs). Have you tried candling it? Stick on humidity gauges also aren’t usually accurate so there is no way to tell if that is the actual humidity.

Ok. I’ll try poking some holes, and I’ll look around for a more suitable substrate (I was using succulent soil because that was what I had on-hand. I should have more time today to look for something better). I have not tried candling it yet because I was going to try to give it a day or so before moving it around more, if that makes sense. So far what I’m getting from rehabbers is that they can’t take it but I’m welcome to try what I can to save it.

Also, it isn’t safe to keep a UTH without a thermostat inside of something made from plastic. Stick on thermometers are also not accurate. You don’t have to move it to candle it if you have a flashlight, though I recommend putting a mark with a marker on it so it doesn’t get flipped. You may wanna also check your local laws about keeping wild turtle eggs.

Ok, thank you! My local laws allow me to keep up to three non-endangered native wild-caught reptiles. From what I read that includes the egg. I can look around for a more accurate set of tools but I also unfortunately don’t have a lot of money to spend, especially on an underdog. It may sound callus, but I just don’t have enough money for state-of-the-art materials. I’m going to try my very hardest though. I haven’t put a mark yet because of the positioning of the dent? I don’t know, I thought I would remember haha. I’ll do that soon though

Ok. I’ve gotten it to a consistent 86° F and 88% humidity. I don’t know if that is still too high but at least it is consistent.

Do you know if it’s even a fertile egg? Have you candled?

When I was maybe 12? 13? years old, I came upon an injured hog nose snake on a CT country road. She had been hit by a car. I moved her to the side of the road, and she proceeded to lay about sixteen eggs, I think. Took maybe an hour. The last few eggs appeared to have been damaged by the car.

I brought the eggs home. Stuck them in a 60s style styrofoam cooler on a bed of grass clippings. During the day I heated it w an incandescent bulb in a shop light fixture. At night, I turned the light off and put the lid on the cooler. 5? 6? weeks later, 4 babies hatched. I waited a week before bailing on the rest.

I took three of them back to where the mama had died. Kept the last one as a pet for the summer. Back then, I always let my prisoners go w plenty of time to plan for Fall/Winter.

Point is, ya gotta try, right?

your best bet to at least try to save it is to constantly check the veins. i have saved some abandoned duck eggs before and i always kept track of the progression of the veins and after a certain point when it is close to hatching you will see movement. I also dont know if turtle eggs have to stay still and not roll like ball python eggs or if they are like leopard gecko eggs and can freely roll around and still make it to term

Hey guys. Sad news. This morning the egg collapsed inward from the dent in the shell. So, unfortunately it did not survive. Thank you all for your advice and help!

At least you know that you tried!