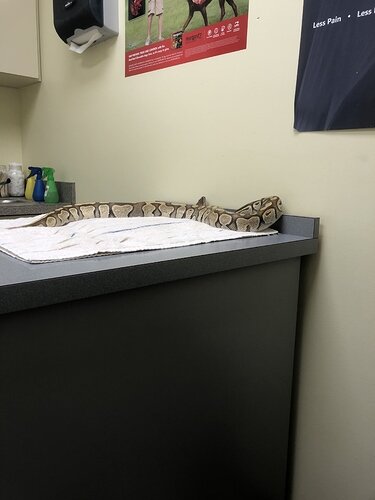 MY suspicions are that she’s simply off food due to the breeding season, as I am often finding her cruising around the front of her tub looking around. She shies away from food though, so it’s not that she’s looking for… I think she just wants a male!
I brought this up to the vet and he agreed, but seemed hesitant on trying to pair her up with a male. Reasonable, but I’ve also been told that females won’t go and lay eggs if they don’t feel like they can handle it.

Someone else I was talking to about it said that the scar tissue needs to be removed. He thinks that she won’t be able to eat properly with the scar tissue on her jaw. However, she’s eaten before with the lumps and did just fine, so I’m having my doubts on that. She only gets fed small rats weekly, nothing bigger.

I feel overwhelmed right now and am freaked out, as I’m getting very conflicting information from people that I trust. I just want what’s best for Butters, and I really like the vet I’m seeing for her (he was nice enough to waver the visit fees and the cost for the medication since we’ve been bringing her in so much for this issue)

What do you guys think? What would be the best course of action here? Go with what the vet says, or should I be doing something different?

Based on the advice given by the vet my first thoughts would be next time find a new vet, it’s pretty obvious that is has limited experience when it comes to Ball Pythons.

Offering too often only leads to more refusal so offer every 7 to 10 days and no more than that.

You do not assist or force feed an animal that knows how to eat, unless it’s on death’s door which you snake does not appear to be.

You also do not pum animals with antibiotics just so they eat, this is how animals start building up resistance to antibiotics which could be an issue if late own you have an issue that needs to be treated such as RI

Yes your snake may refuse to eat for a while however considering the size it could last 6 months or more with no issue.

The priority is to get your snake stress free again and in an optimal environment.

As far as scar tissue I highly doubt it will interfere with anything, how big is the scar left by the vet when he removed the abscess?

I had a similar issue at the beginning of this year (broken tooth that lead to an abscess) after treatment this snake took another 6 months before resuming feeding.

I agree with what you’re saying here. I don’t see how putting a bunch of antibiotics in her is going to do any good. She’s been one of my most voracious eaters in the past, so I definitely don’t think assist feeding is necessary at all.
The scar tissue in question is the lumps on her jaw, rather than where the incision was made by the other vet (there’s two vets at the place I was going to, but I switched since I liked the other one better.)
The incision looks fine and is slowly going away, I’m sure once she sheds again it’ll have healed over completely.

Here’s some pictures of what her lower jaw looks like now: 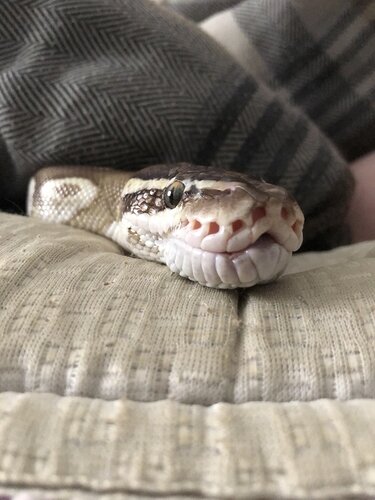 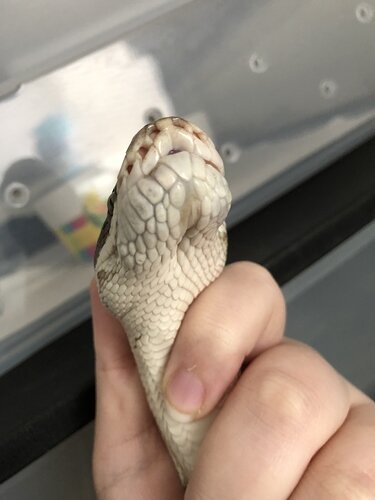 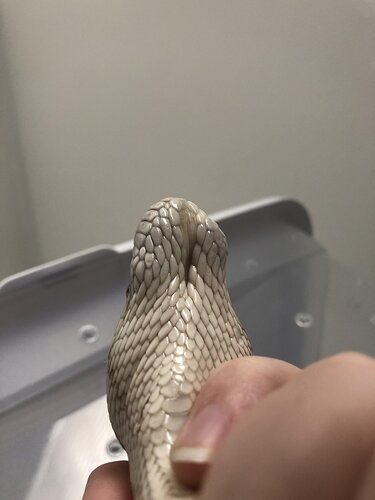 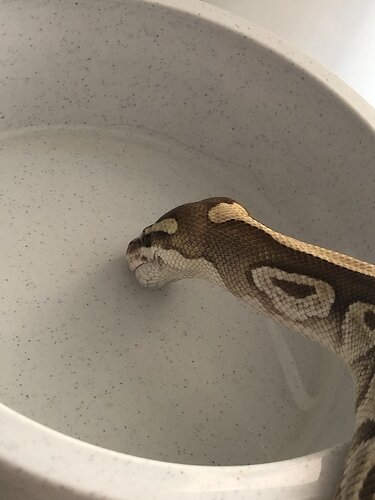 My only concern is finding another exotics vet that is nearby, the other one I was seeing I didn’t like because he talked to me as if I didn’t know jack about snakes and didn’t seem to want to listen to any of my input in terms of her health.
This new vet I’ve been seeing is a bit better, but I can agree that it seems like he doesn’t know what he’s doing. A lot of what he has suggested raised some red flags for me.

The swelling will not be of any concern when feeding since it is under the haw it would be more problematic if it was in the throat area.

Hopefully your vet knew enough to make sure that the entire pocket of pus was removed and injectable antibiotics were prescribed post op, otherwise it could be a reoccurring issue.

Again it might take her a while but eventually she will resume feeding everything he suggested will only make it worse.

I didn’t think so, she was eating just fine with it when she was accepting food.

The first vet, Dr. Turpen, was the one to do the operation on her throat, to try and drain whatever pus was in there.
Then I saw the other vet, Dr. Kilbane, who stated there was still infection in her jaw area and gave more antibiotics for that as well as a mouth rinse/medication that was done orally. Now he thinks the infection is gone and the lumps in her jaw are the scar tissues that were left from the infection.

I’m at a loss still, is there anywhere I could look to find actual reputable exotics vets?

I understand the struggle to find a reputable vet, this may help you https://arav.site-ym.com/search/custom.asp?id=3661

I agree with those who said that force feeding and extremely frequent feeding attempts will do more harm than good. I do, however, feel that finishing the course of antibiotics could be beneficial. I would also recommend against breeding Butters this year, as her body needs to expend it’s resources on healing rather than egg production. Your animal will eat when she is ready, even if that’s six months from now, I wouldn’t be concerned unless she loses a lot of weight. Offering her prey every ten days or so would be most appropriate.

The antibiotics we were given is a completely new kind that is given orally, the others we had finished giving her were injectables.