OK, you may not want to read this if you are easily upset. The little amel in the picture is Fergus (pronounced fair-ges) my wife named it after Crowley (as he is called by Rowena on supernatural). Anyway, we were talking about what she missed from when I used to do a lot of breeding and she said “baby corn snakes” so, it was our aniversary and I happened to see this guy on craigslist under the title “baby corn snake”, serendipitous no? I went and looked at him and thought OK nice big hatchling or maybe a couple months old he is about 17 inches long and a bit skinny. It was the persons first snake but she had another an albino motley that was bigger and, she claimed, a rescue. She wanted me to take a look at it and see if I could tell her how old I thought it was. The second snake was about 28-30 inches long and also a little skinny. I told her it looked like under a year old but that it could be older if it was underfed (since it was a rescue) She said “oh no, it has to be at least 3-4 years old” she also told me that Fergus (not his name at the time) Was “one year old today”. At that point I was sorely tempted to tell her all that I thought she was doing wrong, but I was afraid I would piss her off and she would not sell me Fergus and I did not want to leave him where he was so instead I said “well, I could be wrong” and left. I did tell offer to buy the motley too, but she was not selling. She did say she would call me first if she changed her mind. I have been feeding Fergus every 4 days since I got him, multiple small pinkies because I have not been able to find bigger ones and he eats like a champ he has some unshed skin right at the tip of his tail that should come off with the next shed and other than being grossly undersized for his age seems to be healthy. I keep hoping to get a call for the motley, if not my plan is to feed Fergus properly for a while, get him to grow and then go back to show the previous owner. Maybe a visual will be a better way to convince her to feed more appropriately. She seemed nice enough and to genuinely care about the snakes, but did get very defensive when I contradicted her expectations about their age. 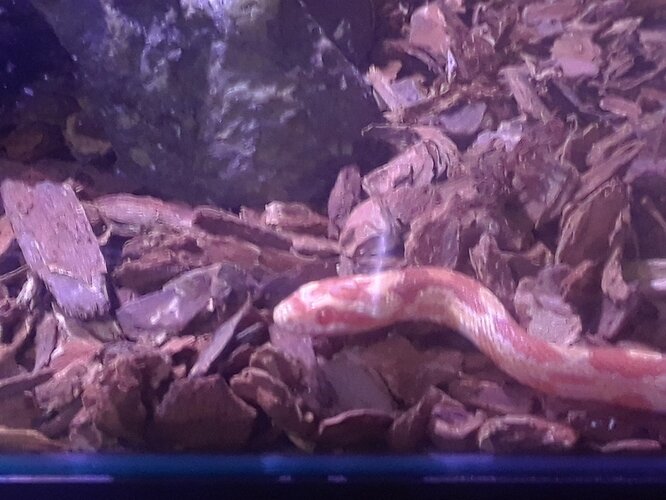 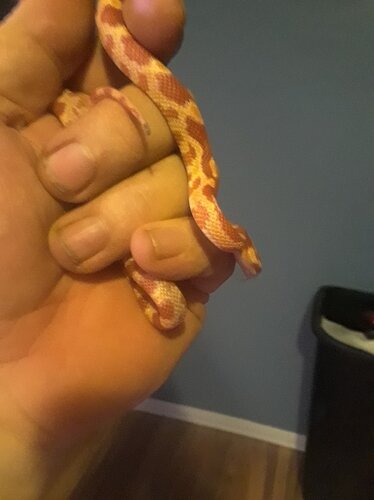 Fergus is an amazing name for a corn. And such a cutie to!

Nice corn! So glad you have him and hopefully she’ll call you about the other one, or at least learn to care for it better.

Nice! is this your first rescue and or snake?

No, been keeping snakes for over 40 years and used to run a rescue in Charleston. I got out of the hobby for a while due to my “real job” and school getting in the way but am getting back to it now.