Moved my biggest and most active girl into a larger pvc enclosure…it is very large for her size but I have a few hides and thought she would do well in there…she’s by far my most active when handling and always moves things around in her tub. Well she already has developed a bit of a bump on her nose so I take it she is stressed and doing some rubbing. I don’t want it to become a sore or anything dangerous, should I just wave the white flag and move her back to her tub or am I ok to give her awhile longer, add clutter etc to see if it resolves itself? She has only been In there since Sunday night that’s why I am not happy she already has a bump. Pic attached for reference. 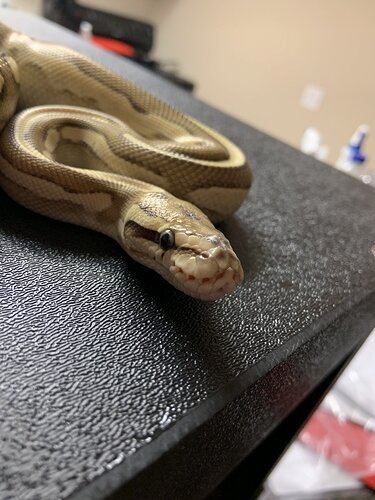 I’d give it more time, maybe black out anything that she can see through on the sides of the container, and keep an eye on that bump! It doesn’t look like really really bad but it’s definitely noticeable. Clutter the container up with anything you can think of. Get some good magnets and make some hides that are maybe higher up to give her some levels to roam on, plants, pvc tubes, large pieces of cork bark to hide under. Give it another week or so and see what happens.

Yeah that’s the only thing I changed last night was just blocked the clear front. I’ll do a little shopping tonight after work and see what we can come up with.

Anything and everything can work. Doesn’t have to be expensive. I get tons of fake plants (no glitter ect) on sale from Walmart, Michael’s, ect usually can find tons for cheap that will work great. If you have to cut them to make it more leaf than stem and you notice wire can always superglue the cut end to make it more rounded. I always keep backup throw away hides, plants, fancier decor, ect. Just in case for stuff like this.

All the luck!! Not sure if he will let you or if it will help but some kind of compress on the swollen part of his face might help lessen the swelling? But again if he wont let you then don’t risk more stress.

You’ve probably done this already, but just in case: double-check your temperature gradient. Make sure the hot side is not too hot, and that the cold side is noticably colder but not too cold. Ball pythons will definitely get restless and try to escape if they’re not satisfied with their temps.

Another reason is hunger. Sometimes increasing prey size, giving multiple rats back to back, or feeding more frequently can curb restlessness. My adult girls tend to act extra hungry during fall and winter. Probably because they’re trying to bulk up for breeding and laying.

As others mentioned, stress can cause this too, but it sounds like you probably have enough hides and clutter. You can always try adding more, even if it’s just some crumpled up paper.

I haven’t noticed any of my females doing this, but I have one male in particular who gets VERY restless during breeding season. When he is not paired with a female, he constantly seeks to get out of his tub. His nose looks like your female’s for several months out of the year.

Thanks I plan to do another thorough check tonight when I have some more time with the workweek being done. She didn’t eat last week, I’m hoping she’ll take a nice big meal this weekend.