I’ve noticed my cornsnake Buttercup will follow the lazer on the heat gun when it’s near her current hide and will even come out when she sees it. My other snakes ignore it . Does anyone else’s herps follow the lazer or have and other odd habits ? 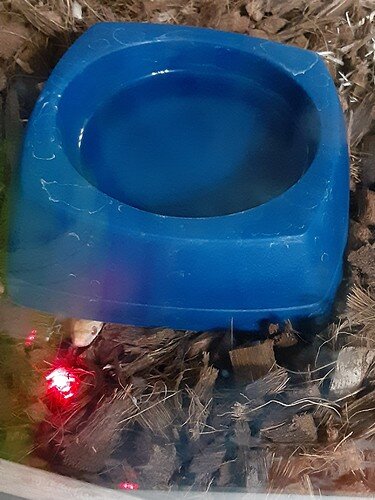 It is extremely cool that she interacts with it but i do want to throw a bit of caution out to be careful.
If she decides to strike at it thinking it’s prey then she is likely going to hit a solid surface.

With that out of the way, what other species have you tried this with?

all of my leopard geckos will look at it with interest, they’ve never jumped at it yet though

I’ve had a whole host of weirdo herps over the years.

My silliest are my two Rainwater albino leopard geckos, Taffy & Lemmy. No idea if it’s coincidence that they are both super gentle, curious, and social, but it’s pretty cute! Though sometimes I worry that they aren’t thermoregulating properly just because they are dying to see what’s going on all the time and insist on sitting by the window.

My African Fat-tailed gecko, BeBe, is hilarious: every time you pick her up, she will freak out and alligator roll and bite… for about 2-4 seconds. Then she’ll take a minute or two to look around. And then, almost all of the time, she curls up in my palm and takes a little nap (usually 5-10 minutes). Then, right after that, she decides that it’s adventure time and starts exploring.

In the past I had a seriously grumpy male leopard gecko, Rasputin- always acting like the tough guy. So when I tried to breed him & he wouldn’t come out from under the paper towel until I took the female away, it was extra funny!

She’s actually following it on substrate the pictures at an odd angle. But don’t worry I be careful. Right now I only have a few cornsnakes and a picky sand sand boa and she followed it out while I was checking temps the first time.