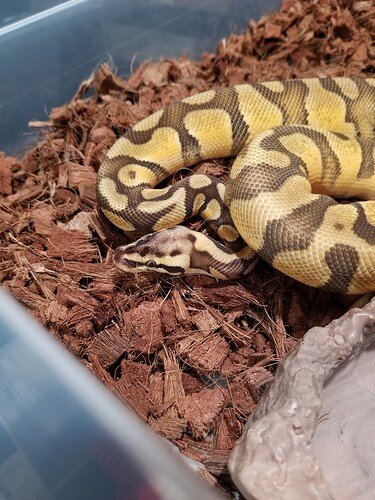 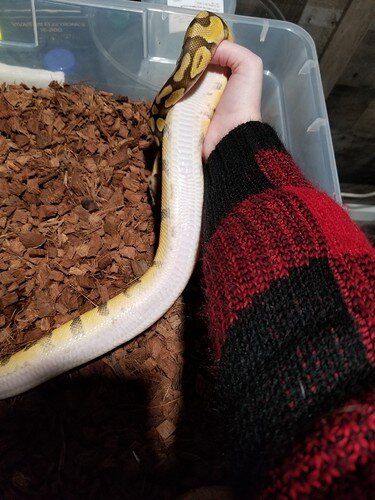 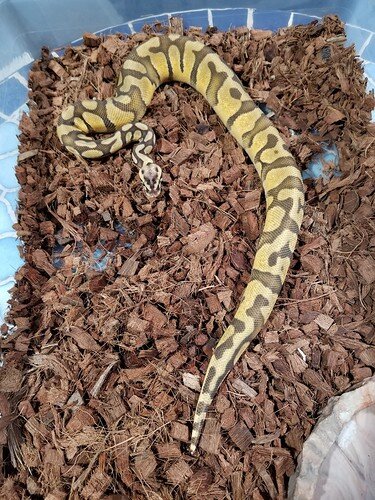 So, I bought this guy from PetsMart in 2019 (I know, I know, I shouldn’t have done it but he looked interesting and it was a pretty good deal, since the ball pythons were on sale for Christmas at the time). He was labeled as a Pastel Enchi on the paperwork, but it seems like he might have something else in him? I’m thinking that he might be a Pastel Super Enchi based on his color and heavy banding, but I’m not sure since he doesn’t have the same kind of headstamp that I see on other Pastel Super Enchis. I know that any help will just be a guess since I don’t have his pairing info, but I will be trying to prove him out in the future anyway, so this is more for fun than anything.

I’m not an enchi expert but to me it looks pastel enchi orange dream. I don’t think it’s super enchi.

I considered that he might be OD as well, but I am not an expert on ID’ing it and the ones I saw on Morphmarket seemed to have a cleaner pattern. I definitely wouldn’t complain if he is though, I was thinking about getting some more of it in my collection anyway.

Do you have any pictures when he was younger? 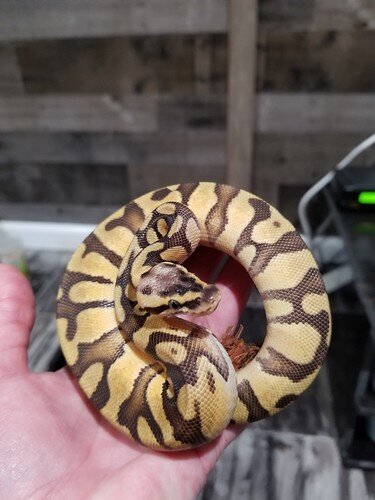 This is the earliest pic I have of him, taken in February 2020.

Edit: I found one more pic of him from when he was younger! 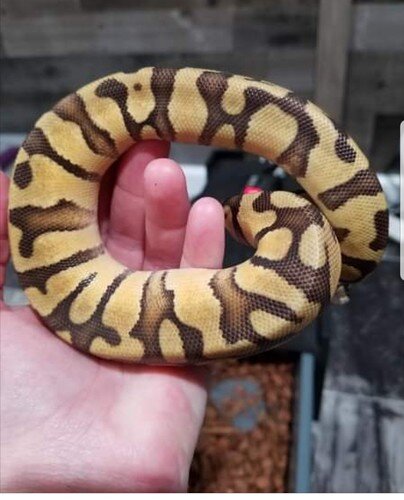 I’m new at this, since his head is so blushed out could He be super pastel enchi or maybe have vaniila in him.
Just guessing. Probably way off. Lol

See, this is why this guy is confusing me! He looks a bit like everything you guys have mentioned, but not enough to be labeled as a Super Pastel Enchi, or Pastel Enchi OD, or a Pastel Super Enchi. I had also considered that he could be a Super Pastel Super Enchi, but that doesn’t seem quite right either. @wmb1965 I had not considered that he could have Vanilla (or anything in the Fire complex, since I figured that he would be brighter if he did have it), but I don’t want to get my hopes up on that since I did get him from a PetsMart. I know that there is genetic variation, but even so it just doesn’t quite fit his description.

No OD in this animal. I have made a bunch of Enchi OD Pastels

My opinion, you have a SuperPastel Enchi. They high blushing on the head and the clover stamp being my go-tos for ID

I think you might be right about that, I realized after I found another picture of him when he was younger that I was trying to compare his current look to the look of really young ball pythons, and that’s why he looked so different lol. Though in my defense, I didn’t have hardly any pics of him when he was little to compare with. He is still really banded compared to other Super Pastel Enchis that I saw on Morphmarket, and is holding color pretty well so far, but maybe he just has a good line of Enchi or something.

I would definitely take Dr Wyman Id over mine he is waaaayyyyyy more familiar with these morphs than me.

Yeah, I believe that he is right. Mine looked a good bit like other Super Pastel Enchis on Morphmarket when he was younger, just more banded than average and he is holding his colors pretty well so far.