Hi y’all! I’m starting to think about the next enclosure for my juvenile BP when he outgrows his 20 gal long, and one option that I’m really interested in are the prefabbed PVC cages. I’m currently looking at the Boaphile enclosures in particular, but I’m having a hard time finding reviews or pros and cons of particular brands. If you use them, what have been your experiences? Do you have a favorite brand? I’ve got time to research and I want to invest in something nice that will last him the rest of his life.

(Also yes I know it’s possible to build them yourself, but a) I’m not handy at all with anything beyond putting together flat packed furniture and b) I live in an apartment with no workshop kind of space, my roommates would kill me if I tried to build something like this in the living room lol)

Hiya, I’ve owned a ton of boaphile cages over the years and Jeff Ronne, “The Boaphile”, is an old friend of mine. Here’s an old photo of my boa room which was mainly comprised of his cages: 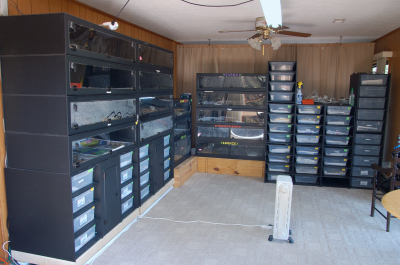 He makes great PVC cages and racks. Heat tape is recessed and the racks are engineered for great strength without the use of exterior screws. My only issue is that he doesn’t use the best ball python tubs in the industry, Freedom Breeder tubs. I am convinced grey tubs with built in water bowls are the way to go and Freedom Breeders are the best for a number of reasons. Superior to ARS tubs even due to water bowl placement and easier to clean material. There was a go-to company that produces PVC racks based around freedom breeder tubs, TGR, but they recently went out of business. I know of two new cage builders pop up since then offering similar racks utilizing freedom breeder tubs, “Pride of Texas Rack Systems” and “Next Level Displays”. Easiest way to find them is probably facebook. I don’t own any from either company yet but I have a rack coming in this week from Next Level Displays. I chose to go with them because I think their design is superior a number of ways but primarily because of recessed heat tape. With Pride of Texas and the old TGR racks they added an extra gap to install heat tape on top of two small pieces of material in the back. To me this is a poor design compared to recessed heat tape that maximizes heat transfer and space efficiency.

As biologicalcanvas mentioned, Boaphile cages are great. Other great choices are reptile basics, animal plastics and vision. You can probably find a used one for a good price if you keep an eye out for them. As far as pros and cons go, one person’s con is another person’s pro. I prefer sliding doors, others prefer hinged.

I used to use AP cages for my large constrictors. I’ve since switched to racks, but AP cages are great, easy to assemble, seal well, light weight, hold heat well. I used mine for years without ever having to replace them.

If you are willing to wait SEVEN months…

Yeah I forgot to mention there is pretty much no lead time with Next Level Displays right now. Paid for my rack last week and should have it this week.

There are several cage manufacturers out there

It will come down to

Someone you may also want to check is Chris https://www.herptasticreptiles.com/