I have had Burms (20+ yrs) and a few Boa’s (10+yrs) over the years but relatively new to BP’s.
My main Ball Python (just a pet / no breeding) has been a picky eater from the get go.

I had her in a custom made 30X20X14 melamine enclosure for about 2 yrs. She has grown to just over 4’ and around1400 grams. She is a bit thin but by no means unhealthy.

Recently I purchased a 36X24X16 PVC enclosure. Cluttered it up with naturalistic hides (slightly larger than her old ones, half logs, foliage, etc . and she went on her longest fast ever! Just over 3 months. I was trying everything from mice to rolling rats in gerbil shavings.

I finally decided to pet her back into her old enclosure with cheap plastic hides (like Chinese restaurant take out containers upside down with an opening.

Two days later she is crushing food again! I don’t know if her fast was just over or if it was the smaller tank.

I am thinking these are my options:

Any thoughts or suggestions?
I am adding some pics, top tank is the new one she apparently hates and the bottom is the smaller one I just put her back into. Pic was before 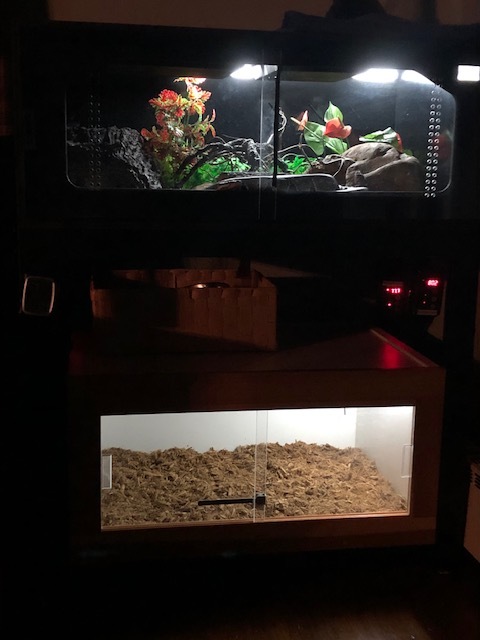 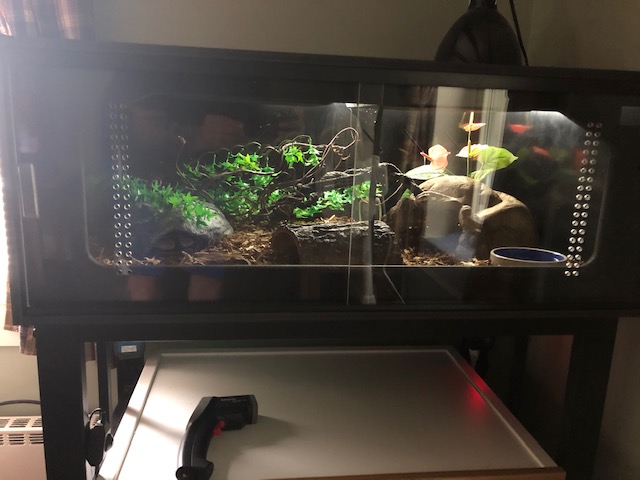 Try putting the old hides in the new enclosure. Sometimes the “newness” can throw them so a touch of their old home makes them happy

I’m definitely not an expert but my approach would probably be to put some of the decor from the new tank in with her now (if it will fit) to help her get used to it, wait until shes been eating regularly for a while and then move her into the big tank with all the stuff that was in her old tank, including her current substrate which has her scent on it. If she settles in alright try replacing one of her hides, let her get used to it, and then replace the other.

That’s what I did at first ironically. even took substrate from the 1st tank so the smells would be the same. All the plants and leaves where hers from before too. Picky little thing. Also, not a great eater. On rare occasion I can trick her into a rat but 90% of the time its mice for her. Luckily , my spotted python is happy to clean up any mice she refuses

well…the only other suggestion is therapy for agoraphobia but finding a good snake therapist is tough these days.

If she likes small private places, try keeping her in a tub with her old hides. If she likes it , go shopping for a couple other snakes or reptiles that would appreciate the empty tanks.

go shopping for a couple other snakes or reptiles

I do believe another snake is in the near future, once I get the wife on board. Not sure if its going to be another BP or another Childrens or Stimpsons.