Recommend Other Stores from Your Store Page

As both a seller and a buyer on Morph Market I wonder if a feature like a friends list, recommendations, or some sort of curated list would be worth thinking about. I don’t produce a lot of animals so I often send potential customers to other vendors when I don’t have what they are looking for. I will often send someone a link or multiple links to Facebook and Morph Market stores but having curated collections would make that easier.

The way I see it working would be something like this: 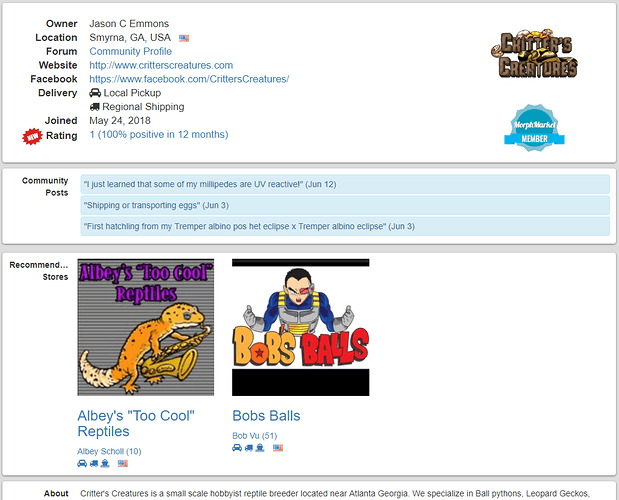 I used the existing elements from the store list here: https://www.morphmarket.com/us/stores/?cat=bps
some of the CSS didn’t apply when I did that and the card appearance isn’t there either.

Personally I see this as a feature that would be used very little, reminds me of the Top 8 from myspace. I can give my recommendation if someone asks, but just seems odd to advertise others on my store page.

@critterscreatures it’s an interesting idea for sure. I had been thinking about something a bit related – testimonials. However this would be a specific statement made by another breeder which would show up on YOUR page. So similar in nature but doesn’t have the navigational aspect, more of a reputation one.

It was 3am, I was elbow deep into typing out a reply to a message asking if I had any hognose left and I thought “It would be cool if I could just send them to my morphmarket page and they could see who I recommend instead of typing out and looking up a bunch of URLs every time”

I agree with @owalreptiles though, my way might be rarely used if there isn’t a community of hobbyists supporting each other. People who don’t have limited availability might also be less inclined to send business elsewhere. I would be interested to see the social relationships that did appear though, Georgia has a pretty good hobbyist community and I’m sure there are others out there.

There may be a way to combine the two though. If someone adds a recommendation it could show up somehow on the other breeders page. Perhaps recommending someone could include a testimonial so the reputation aspect is on the target’s profile and the navigational aspect is on the originators profile.

While I recommend breeders to my customers or even potential customers all the time, I would not see myself advertising for other breeders on my store page. When I recommend someone I want to make sure to recommend the right breeder based on what the customer is looking for and at the same time if I send a potential customer to a breeder I know that I want to make sure it’s the right customer as well, so to me there is a level of discussion involved there not just having people’s store on my page.