Slugs laid before a clutch. Experiences/Advice?

I know it’s not totally uncommon for a ball python to lay a slug or two before a full clutch is laid. But I’m curious if anyone has some experience with similar details to what I’m seeing with one of my females this week.

Three days ago I found a slug egg in her tub, which was ruptured. I’ve been monitoring her closely since then and this morning I found another similar ruptured slug. She is due to lay in the next couple days based on her POS. I’m still seeing at least 5 distinct lumps in her lower portion.

I’m curious if anyone out there has seen this exact thing before and how things went for them. Also looking for general advice on things to watch for in terms of making sure I’m on top of potential health issues for her. Just want to be proactive and ready for anything that might require a vet visit.

I can’t comment about rupture slug but I know @wreckroomsnakes had something similar with ruptured eggs if I remember well.

Now as far as laying and sill having eggs in her you are taking a big gamble the more days are going by, she could go septic and die.

I would personally not wait over 72 hours before taking an animal that still has eggs remaining to a vet.

There can be several issues that can be as simple as aspiring the first egg to let the rest through or as delicate as egg removal surgery if the eggs are stuck to the lining of the uterus.

I did have an egg rupture during laying, but have not had a slug. It possible that the slug just started to leak or she laid on it, i have had slugs “leak” when sitting in the tub if i leave them in there while waiting for her to finish laying.

Some updates about this situation. First off, I immediately made a vet appointment and got in early morning on July 2. The vet said they didn’t feel anything that seemed like eggs and that there didn’t seem to be an issue and to monitor her.

On the morning of July 4th, she passed these things shown below, which were similar to the egg looking things from before, plus some chained structures I hadn’t seen before. Also seemed to be a lot of liquid like egg goop. 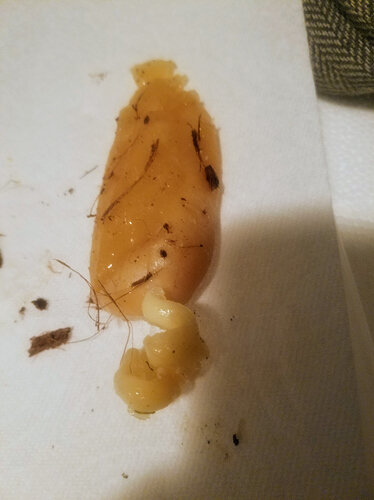 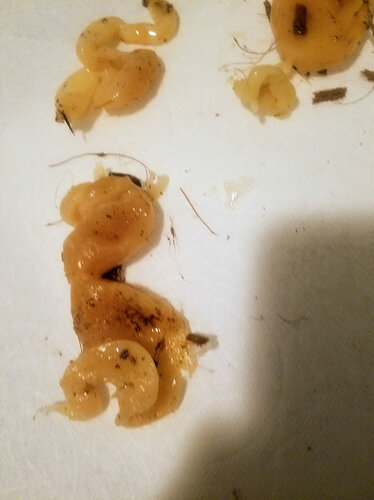 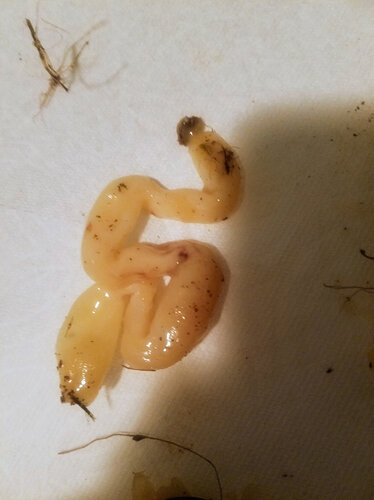 After this, she stopped laying inverted, stopped twisting, and generally stopped acting visibly uncomfortable as she had been before. I assumed she must have passed everything and should start eating again soon. I updated the vet and continued to take their advice of closely monitoring her.

After 2 weeks of not eating, I pressed the vet for more we can do to rule out something still going wrong. They referred me to another place to have ultrasound done, and I had to wait another 2 weeks to get an appointment for that. During the wait she still hasn’t eaten, but still never looked uncomfortable again.

Had the ultrasound done in early August and everything came back normal. No blockages, no objects in the reproductive or digestive tracts, no abnormal organs. Which was a relief, but it doesn’t help fix that she has absolutely no interest in food.

Then I had a general blood panel done as well but now that didn’t come up with anything significant either.

I’m at least cautiously optimistic and continue to monitor her for any apparent decline; and she continues to seem ok except for her appetite, which used to be absolutely ravenous.

If anyone has any other suggestions, experiences, or advice that could help me it would be very much appreciated!

When an animal lays eggs or slugs, what you want to do is a full cleaning disinfecting the cage/tub (5% bleach solution will do the trick) same goes for everything else in the cage/tub. After that full substrate change and finally you want to bath or wipe down your female completely with chlorhexidine to remove the scent from her.

Once you have done all that it’s a matter of patience, some females do resume right away some take 60 days which coincide with the time at which their clutch would hatch.

Thanks for the advice!

I did go through the normal process I go through after a clutch after the last stuff she passed. The only thing I see different though is that I just washed her off thoroughly with plain Dawn soap. I’ve only done a handful of clutches but it’s worked for me so far. Is it worth finding some chlorhexidine instead for this? I don’t have any on hand since I do the majority of disinfecting with F10 disinfectant.

Again, your advice is much appreciated.

You can wash her again with dish soap if you don’t havebany on hand.

Another update: She’s finally eaten again a few weeks after the expected hatch date for the would-have-been clutch. It’s been over 6 months since her last meal, and almost 3 months of being worried sick since the egg stuff all passed.

It’s a promising sign that she is coming back to normal.

Thank you to everyone who gave advice on this thread. Yall really helped out.

I was getting ready to post, in my experience some females will instinctively fast until after the eggs have hatched, even if the eggs are artificially incubated.