So how many meals before selling? [Cornsnakes]

So in general what’s the time frame of meals eaten before selling a baby corn? I have all of mine having eaten once (and one that’s slightly ahead eaten twice) and just curious. Have read 3 times and others say 5 and some say wait until they are a few months old…

Also obligatory picture of a baby for yall. 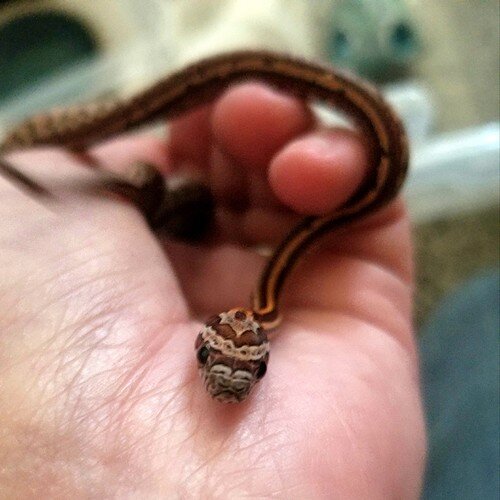 I list babies after they’ve had at least 3 consecutive meals with no problems and no assistance. Age isn’t really a great metric for determining when they can be sold.

I think it would be dependent on the new owner. Selling to another hobbyist or wholesaling to a pet shop, 3-5 meals seems to be the industry standard. However if a lot of the potential customers are going to be newer keepers particularly children getting a first pet, I feel it would be better to get them much more established then that, as much as 10 or 12 meals or even until they’re on fuzzy mice, just so they’re that bit more solid for handling etc. Keeping them until they’re that bit bigger has the advantage of being easier to sex as well, and you can get a better idea of how they’ll color up for selecting holdbacks etc.

At this time I’d be unable to hold them for that long just to hold back before selling. If they didn’t sell of course I’d make the room somewhere (a rack a bought in March is still not even started) but the goal for this clutch is to get steadily feeding and finding homes relatively quickly. Future clutches I’d be at a better position to hold for longer.

Cool, the 3-5 meals, as I said, are an industry standard anyway, so you wouldn’t be doing anything wrong at offering them for sale with that level of feeding. If you are going to be selling on MorphMarket you are probably going to be getting that more experienced keeper anyway, or since you are looking to move them quickly, you may decide to sell them in a job lot to a pet shop or wholesaler who would expect that size animal anyway.

Unfortunately not sure 4 babies is enough to wholesale. It wasn’t a big clutch and about half hatched. Was considering local sales this year since I haven’t completely figured out the whole shipping aspect. This is my testing year overall! Which is why I’m glad for a small clutch to deal with. I do plan on scrutinizing any prospective buyer of course. I want my little ones to find good homes.

I would say feed five meals unassisted. If they refuse one of the meals in between restart the count. Eventually you will reach five accepted. That should give the baby enough time to get weight and essentially it’s “appetite”.

It’s been a few years since I’ve sold any babies, so things could have changed (and also dependant on your local area), but I would list them for sale after 3 meals, but they often didn’t actually sell until they were at 10+ meals. Especially if you’ll only be selling locally, they likely won’t sell super quickly, so hopefully you’ll still have room for them if they take a few months to sell.

Edited to add that I just checked the records for a clutch I hatched in 2014. Of the 10 babies, they sold between 4 and 19 feedings, with the average being a little over 11 feeds before leaving me. For some of them, the number is pretty high because they had to wait until appropriate temperatures before shipping.

This is very good advice! That allows you to get your presence because you have stuff for sale, but even if they don’t sell it still gives you time to get weight on the babies.