The most defensive hognose to ever hognose

Doug is my second hognose. He was super laid back when we brought him home. He’s been a bit of a picky eater but he’s turned it around lately. While his appetite has improved his personality has regressed. We had to take a break from handling due to a mite out break. The outbreak was contained to one snake ( so far so good, 2 weeks mite free ) and we didn’t want to possibly spread the infestation. Since things are looking better on the mite front we are trying to get back into a handling schedule for our youngsters. This guy is having none of it. He flattens out, he bluff strikes, he hisses… he is super mad about it. Just wanted to share and see if any other hog lovers had any advice or words of encouragement.

I went through a period of teenage angst with Doug’s future baby mama; my female toffeeconda hog named Dia, a little while ago. She mellowed right out after she bit me 3 times and let me know she runs things around here. We have an understanding now.

I’d say your hognose is displaying pretty typical hognose behavior. I have 7 hognoses now, with an 8th on the way. Their personalities are basically this:

Sunfire will hiss and bluff strike at the front of her tub whenever she sees movement near the tub and she happens to be laying in the front. Even if I’m sitting on the floor checking other tubs way below her tub.
She wants NOTHING to do with anyone unless she’s hungry. Then she’ll come up to me and sniff me out to see if I have food for her. If I don’t, she resumes hissing at me. Or latching onto my finger like the brat she is 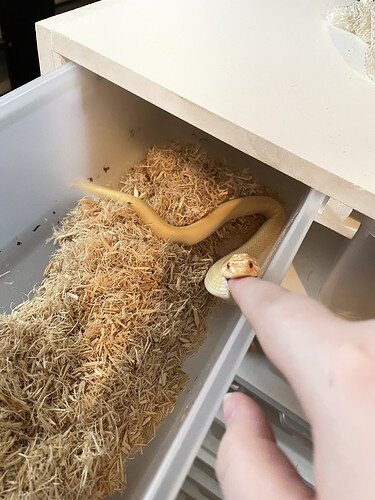 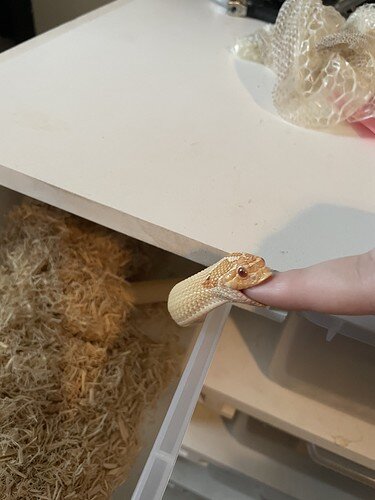 Moon also has a big attitude, and acts very much like Sunfire except she even hisses and spits at food. I have to leave her in a little container with her f/t pinky mouse and leave the room, and once she calms down she eats it on her own. 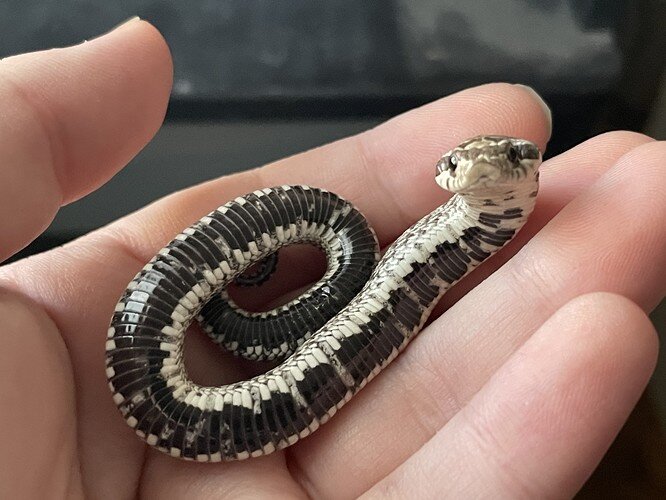 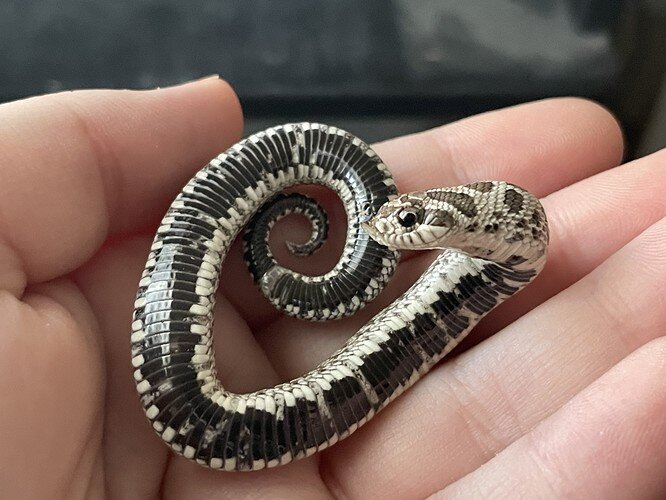 Mango fully hoods and bluff strikes and hisses, until you pick him up. Then he acts like the sweetest thing ever. 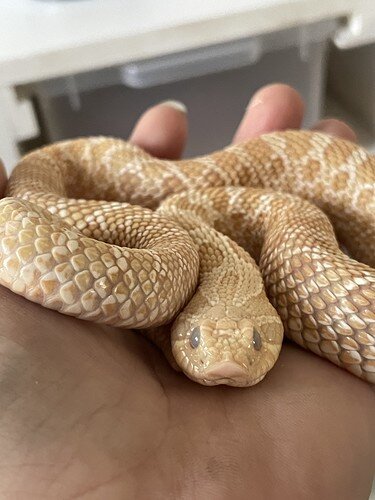 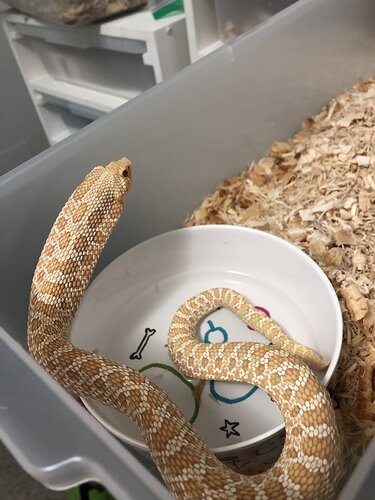 Mocha is highly food motivated, and will always come to the front of her tub with her head and neck raised high to see if I have food. She’ll sometimes hiss at me if she gets annoyed. 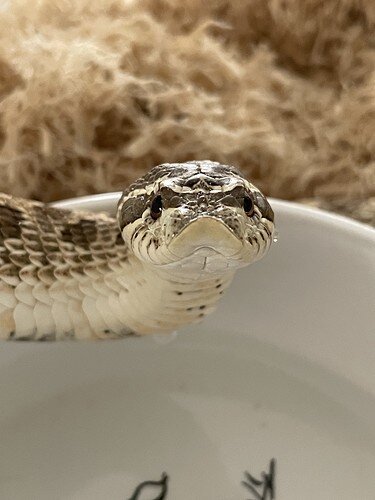 Scarlet is just like her mother, Mocha, and is mostly food motivated. I’ve only had her fully hood at me once when she latched onto my finger instead of her pinky and I had to pry her off. She was very upset about this and refused food for the next couple of feedings. 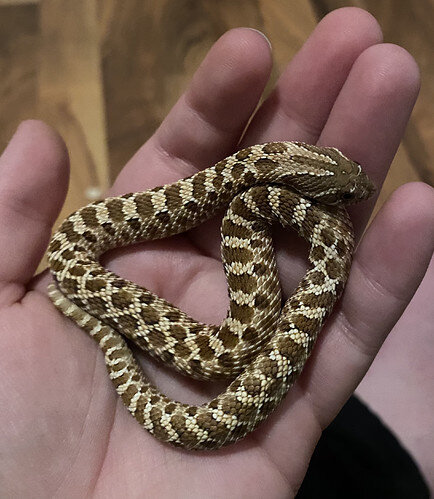 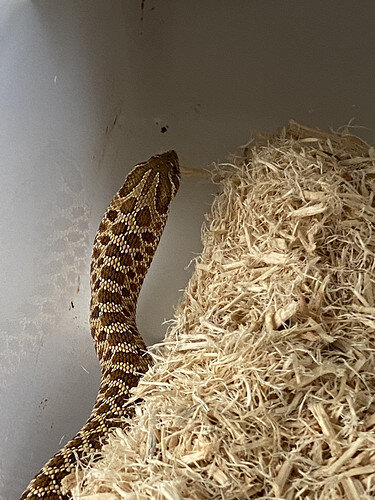 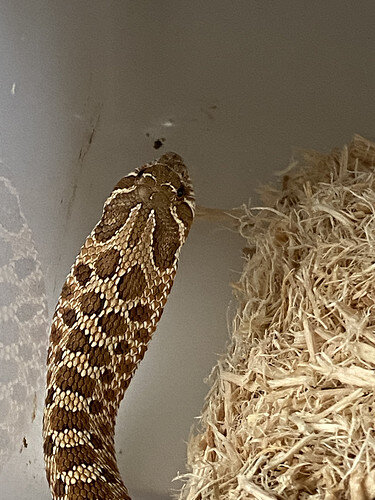 Blizzard is also very food motivated, and has come at me with his mouth wide open. Chomped down on me when I tried to pick him up. Huge appetite for a little male that’s barely 10 grams 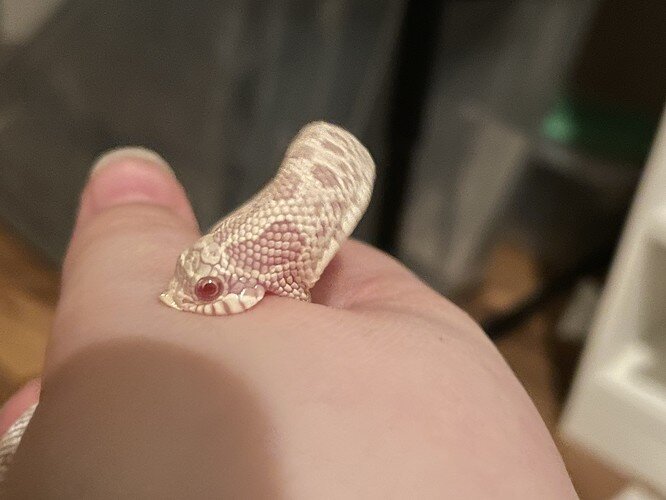 Blaze is my newest addition, so I don’t know her personality too well yet, but she seems to be more of the food motivated type as well. She hasn’t hissed, hooded, or bluff struck at me at all. Usually pokes her head up out of her bedding to sniff me out if I try to dig her up. 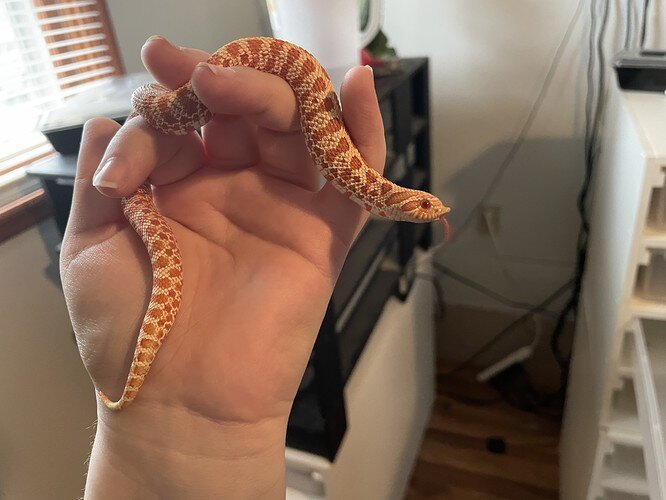 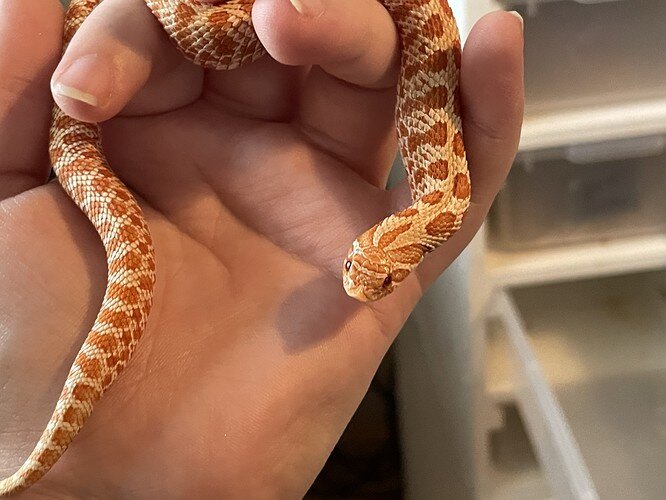 I’m also getting another soon, once I pay her off. Wonder how she’ll be, she’s a subadult red albino that should hopefully be ready to breed next year.

Your snakes are beautiful. Thank you for sharing. I know his behavior is typical I just got spoiled with my first one. Hopefully I can get him handleable. If not he’s still a good boy. I plan to get a few more and hopefully get a few breeding projects going.

Yeah, I’m kind of used to their shenanigans so I don’t mind either way

Most of my hogs are quite friendly. They’ll get mad occasionally when I go to pick them up but they calm right down once I have them out. They’re all very curious little buggers. Whenever I need to one that’s buried out, I’ll find them and tickle their sides slightly. Sometimes they’ll hiss but 99% of the time they come straight out to see what’s going on.

I haven’t noticed any differences in personality when it comes to the gender. Most of my boys are very sweet. One of them is super nosy and will attempt to come out every time the tub is open. My girls are also fairly mild mannered. Except one. Her name is Soba but my wife and I call her Karen

She is the angriest of all my hogs. She hates you with the fury of a thousand suns but she’ll eat your food. Luckily she’s never bitten me but she will bluff strike and hiss non-stop while sitting on the palm of your hand. My wife swears she dislikes her more than me. I honestly don’t know if she’ll ever calm down. I’ll keep ya’ll posted if anything changes lol. I just put up a pic of her the other day in the Let Me See Your “Snoots”! post

I’ve had this girl for just over 6 years, since she was a hatchling. Even she has her “bad” days. It’s a hognose thing, and even though we keep them in captivity, sometimes they just don’t want to interact with us. They tell us to take a hike by hooding up, bluff striking, hissing. 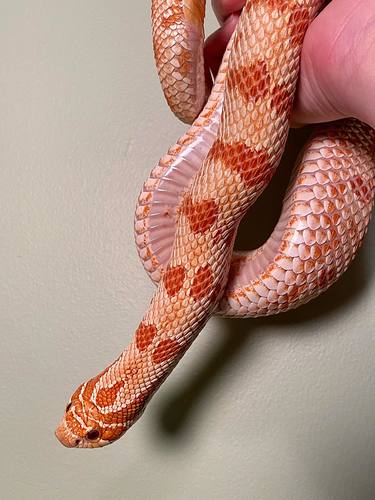 Hognose snakes got to be the cutest snakes in the world…Just want to hug them lol.

Hogs are my favorite too. You guys all have some beautiful snakes. Thanks for sharing. I had my girl Dia play dead on me one time. It was cool to see in person.

I have a few hognose snakes and my male, booger is a real pain sometimes! 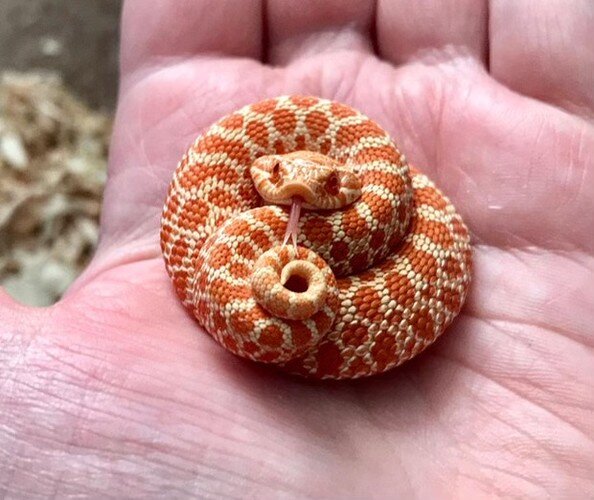 I love hognose snakes so much! Not even just westerns either, been looking into the madagascar species as well. Can’t wait to have my own soon. Thought of a good name too: Peaches!

I’ve handled a Madagascar hog at a reptile show. They are a pretty big species. Super cool. I love the westerns, they’re my favorite snake by far, but I wouldn’t mind owning a tri color at some point. They look really neat.

More than anything, they are nervous and really like to feel secure and safe and need places to do that, not just burrowing in the substrate, even in quarantine. We have seven with an 8th on the way (4.3) and I noticed a few of them were acting pretty defensively when they first came home until I set them up with less visual stress. I put them in enclosures with 3 solid walls and they immediately calmed down. The ones that are really nervous, I cover the front of the bin with something they can climb over, (tunnel, fake plant, crumpled ball of newspaper) so it’s their choice to see you or not, but otherwise they will get scared and hiss and bump up against the bin when they see movement or flickering lights and continue to be stressed. Only my oldest adult female is in a clear bin, the rest are tinted and have 3 solid sides.

I also stopped tong feeding and now I drop the food in random places before the lights come on, no more defensive feeding responses, no accidental bites from a bad strike, nobody associates me with food and we’ve noticed an increase in natural prowling/hunting behavior. One of my males had an absolute heart attack when presented with food, and it was causing me to have one when he would have these incredible tantrums and then hide under his water dish for days. But he is now my best and most friendly snake and will crawl straight out of the bin into your hands to be handled. He just doesn’t want to be presented with food and that hasn’t changed, but when I stopped pushing that style of feeding on him and respected that, he stopped having an attitude with me. The males also got much more friendly when they entered breeding mode, in my experience.

From my understanding they can see movement from pretty far away, something like ten feet? So what we think is just “basic movement” really seems to spook some of them. So small, slow, chill movements when you are in their personal space. I also try to alert them to my presence with a hook, just something that they can smell and touch without freaking them out, and use that to touch them all over their bodies and run it under their bellies, so they get used to that feeling of being touched all over and it’s not as jarring when you pick them up with warm hands and hold them. Just my experience, but I believe that is a fear response and can definitely be tamed down with some patience and respect for their communication.

Thank you for the info. He had a bit of a stressful start in our home. We brought him home and soon after another of my snakes had a mite out break so it was baths and paper towel for everyone for about a month and a half. They all just got all of their enrichment and substrate back yesterday. They were being kept with minimal interaction and minimal cage decor. They all have their cork flats and fake plants back as the mites seem to be gone for now. If not I am armed with a can of provent a mite. I’m hoping that will ease their nerves a little. I will definitely take the advice on feeding. That’s when he gets all hissy is when I offer him for. I’ll start leaving it in there for him to find on his own.

No problem, happy to share my experience. Ours had a rough start too and we think he was shaken up a bit during shipping, plus part of quarantine on paper is never fun. Now we only get shipments at the hub. I’m sure it’s just been an annoying time for everyone and hopefully they’ll settle back in with some regular handling and daily routine. Hopefully that will help with feeding defensiveness though. Wishing you all the best with Doug!

Thank you @lavendersupermorphs ! Very generous and kind of you to share your knowledge and experience here. Much appreciated.