Think I got the wrong gecko

I bought a gecko online from a private party it said leopard gecko I went and got the little fella but it was over 100 degrees so I raced home as quick as I could (no AC in my truck so even hotter) but when I got home to closer exam it I believe I was given a African Fat-Tailed gecko how can I know 100% sure without taking it to a vet? 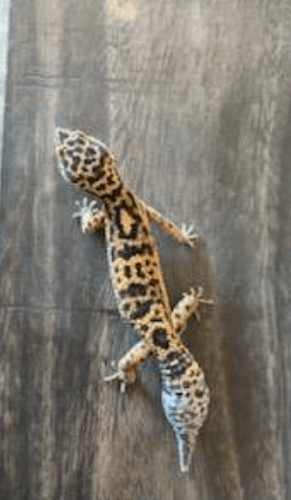 No that is a leopard gecko. @mblaney and @westridge could give you reasons why that tail looks like that.

Also @erie-herps could help too

So would you say it is a leo?

I feel like I’m getting better at the identification thing, lol

You’re getting pretty good. Just spend time on the marketplace to look at morphs and you’ll be an expert in no time (and be addicted to leopard geckos and want one

Defo a Leo. Not any fat tails like that as far as I’m aware! As said just a regrown tail.
Cute little guy though!

Thank you everyone for your help I’ve never seen a regrown tail before will the bulge ever go away? And she’s doing great her tank is at the correct heat she’s eating and drinking and just amazing