I keep a lot of uncommon species and hope to make topics on their care once I feel I’ve figured out a good setup. This topic pertains to toad head agamas, I believe all subspecies in Phrynocephalus have the same or similar care.
My boy is a Phrynocephalus Mystaceus. He is only a couple years old and I have had him since he was only a couple months old, he was originally wild caught. 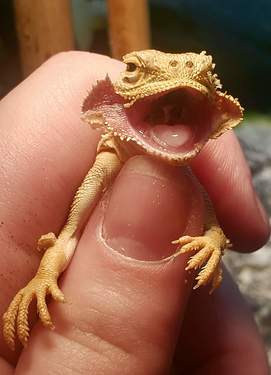 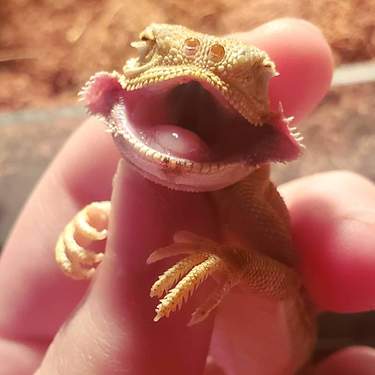 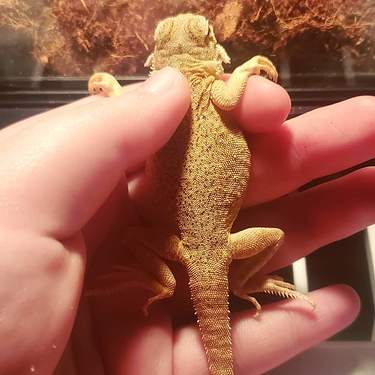 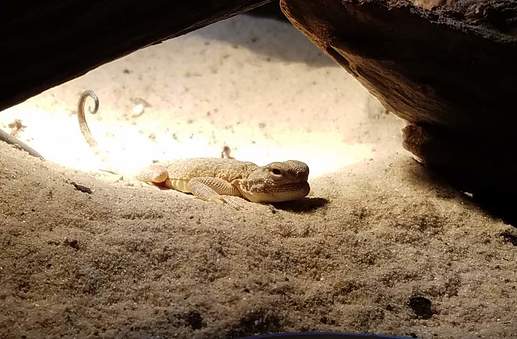 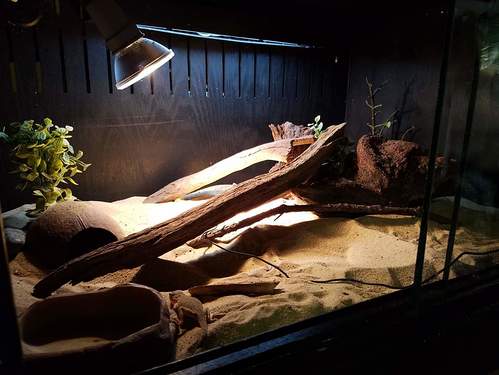 Toadheads come from the desert, they like it hot during the day and cool at night. I provide mine with a basking area of 120-140F (measured with an infrared heat gun). These guys also require very good UVB lighting. I highly recommend a T5 12% arcadia bulb. If you are unable to get this type of bulb a T5 10% reptisun is my second pick. T8 style bulbs can be used as well but are less effective than T5. Arcadia UVB bulbs must be replaced every 8-12 months, reptisun replaced every 6-8 months. Old bulbs can be used for another 6-12 months for tropical species who would normally use 6% bulbs. For a heat bulb I use a halogen flood light, it is important that it is a flood style, not spot. I keep my lights on a 10 hours on, 14 off cycle. Let the enclosure cool down completely at night, even if your house is in the 60s.

Toadheads eat insects, variety is key. Make sure your insects have been gutloaded with veggies before feeding. For staple feeders I use a variety of cockroaches (red runners, dubia, giant cave cockroaches, lobster roaches, ect). Secondary staples are worms (mealworms, superworms, hornworms, BSF, fly spikes, wax worms). Toadheads under a year should be fed everyday, I use the head size to determine how much to feed. Imagine the head hollowed out, feed as many bugs that would fit in it. Once past a year old I reduce feedings to every other day. I dust all food with plain calcium powder, once a week with calcium with D3, and twice a month with a multivitamin supplement.
I would recommend tong feeding, putting the bugs in a shallow dish, or on a rock to reduce the amount of substrate eaten.
I offer I tiny bit of leafy greens (collard, kale, red/green leaf, dandelion) every once and awhile as they will eat bits of greens to get water in the wild. Mine has never done it personally but I still offer.
I also offer a small water dish, something just large enough he can climb in to if he wants. Again, I’ve never seen him use it but I still offer. They get nearly all of their water from their food. A couple times a week I will mist him directly to see if he wants to drink. If they do they will stick their tail in the air and lower their head, drinking the water that runs down their body. He usually drinks for a short time before running off. Do not soak the enclosure, they need low humidity.

Toadheads require sand, I only recommend using natural playsand. This sand is fine and allows them to burrow naturally while containing no dyes that could be harmful.
Calcium sand is NOT safe, it is normal sand that was been coated in calcium with encourages the animal to eat it which will lead to impaction.
Walnut sand is also unsafe as it molds extremely easily.
No other substrate can be used for toadheads, they require a deep layer of sand (3-5in) in order to thermoregulate properly as well as walk properly. Their toes are specialized to be able to run on loose sand, and they are extremely fast.

Toadheads are small but require a lot of space due to their very active nature. Groups can be housed together but not multiple males. For a single toadhead I would recommend nothing smaller than a 32Lx24Wx18H (inches) for a single or pair. They will use all of the space you give them.
I offer branches for climbing and basking on, a couple coconut hides, and some large rocks for basking on. Mine doesn’t seem to climb much but he does climb on everything provided.

Every animal has it’s own individual personality, this is just what I have experienced. These guys are extremely fast and will be gone faster than you can react, then in a blink of an eye will burrow in the sand and disappear. They are easiest to catch once they have burrowed. Just because of their speed I only recommend these guys to advanced keepers. These guys are very shy, however after feeding mine with tongs for years he now runs to the front of the enclosure waiting for me to feed him. It took about a year and a half for him not to run and hide after grabbing his food, now he stands and eats in front of me. However the moment anything other than food enters the enclosure he is gone, running around like you let go of a balloon and it’s sputtering around the room. There have been several occasions where he has ran up my arm and all the way down my body then across the floor, only to stop and try to burrow in to the flooring unsuccessfully. In short words, they are strictly a display animal. Even if you were able to hold them I would not recommend it just because they can go so fast it takes a split second for them to run off and loose them somewhere in a crack or down an air vent. The only time I even handle mine is during cage maintenance, or to catch him after the occasional running across me escape.

That little dude is super cute! He almost looks like a uromastyx & a beardie had a baby.

This is absolutely brilliant

Right. Then again they are from the same fam group as both beardies and Uros. Such a cute lil lizard.

Hey I have been wanting one of these for a while now but nothing I’ve read says how long they live though. I was wondering if you happened to know the lifespan.