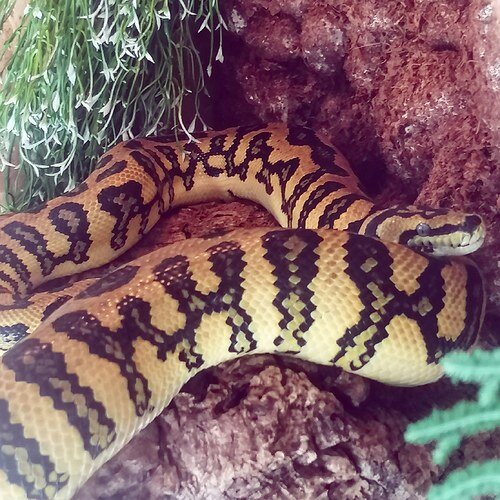 I picked up this beautiful lady from the local shelter

Instantly fell in love with her when i saw her. She’s my first Carpetpython and from her looks and size (about 2m/6,5ft) i’m guessing she’s a jungle? The shelter staff couldn’t tell me, but maybe one of you lovely folks can? ^^

I don’t work with Carpets so I couldn’t say, lovely snake though.

Jaguar morph, @lunace
The Jaguar mutation comes from Coastal carpets, so it has some coastal in it for sure. Given the bright yellow I’m guessing it has some Jungle in it too, most jags do.
Folks will tell you Coastals and Jungles have a natural intergrade in the wild, but I have it on good authority from an actual expert on Carpets who has been there in person, that they really do not.

Now, is a subspecies cross really a cross? I don’t have a strong opinion on that, many scientists don’t accept the idea of subspecies as valid, whatsoever. In Carpet Pythons, specifically, however, I think it is worth staying aware of, because their taxonomy is in flux and their inter-group relationships are not well-understood. It could be part Diamond Python, too, which definitely should be it’s own species like Centralians are…there’s a lot yet to learn about the Morelia spilota group.

You have a mystery snake, much like my jaguar girl.

Be aware: The Jaguar gene, FYI, has a neurological problem associated with the mutation, similar to Spider in ball pythons. They all have varying degrees of wobble aka jagging in carpets. My wonderful jaguar gal, Alice Fraser, has somewhat poor proprioception; Especially when she feels startled, she goes a bit derpy with her head movements. She eats like a champ and doesn’t have much visible jagging until she gets surprised. I have extremely mixed feelings about ever breeding her, or any Jaguar carpets. I may, I may not. Others should make their own (informed) decisions.

I am, however, committed to caring for her until one of us kicks the bucket. She may well outlive me.

As Jeremy notes, your animal is a Jaguar morph, so it has some degree of coastal blood in it. Beyond that it is a guessing game. The colour is not a good indicator of Jungle blood as I have seem some incredibly high-yellow IJ Jags and Diamond Jags. The most honest answer for you is to assume it is mutt and not assign any specific subspecies status to it at all.

If you want to learn more about carpets then I highly recommend the Morelia Python Radio podcast. There is a ten year catalogue of episodes there covering every imaginable topic.

The colour is not a good indicator of Jungle blood as I have seem some incredibly high-yellow IJ Jags and Diamond Jags.

And I haven’t finished listening to all of Morelia Python Radio, either, thanks for the reminder on that, too.

I own some Papuan carpets (aka Irian Jaya or IJ) with a bunch of yellow myself, now that I think of it. I think wild-type Papuans are my favorite looking carpets, I love them. I wouldn’t ever make any jags with them, they are too perfect as they are.
I might be chasing after Axanthic Granite, though!

Thank you so much for the detailed answer! I guess i’ll never really find out because the staff told me the poor girl was abandoned and the fire department cached her out of a compost pile in some garden…
But yeah, i’ll definitely have to look into her care some more, after our first few weeks together i’m just glad she’s eating for me and is rather chill overall ^^
The wobble-thing is definitely good to know, although i haven’t seen her do something like that. I heard it can get worse in Spiders when they get excited (eating, hunting etc.) but even during feeding i haven’t noticed anything strange on her so far. Fingers crossed

Thanks for answering! Good thing i’m not into breeding then ^^° I’ll definitely look into that podcast, still have a lot to learn but i already love watching her so much.

As others have said, without detailed lineage from a breeder there is no telling what sp/ssp aside from at least a bit of coastal to contribute the jag gene. Great looking animal though! As long as you enjoy her and care well for her then that’s what’s most important. I also highly recommend Morelia Python Radio and all the various new podcasts on their network. Endless hours of quality info and entertainment

A friend took on a jag last year that was dropped into a shop, seemed ok so he took him home to help him, next thing he knew it looked dead, was upside down in the viv, that’s when he knew something wasn’t ok, his head was always flying back, corkscrewing etc. Not a life at all.
Unsure why people still breed them as it’s horrible to see them like it…
Touch wood your girl isn’t like that! Just keep an eye as can happen any time throughout her life from what I know…
This guy was huge so would’ve been an adult and only just started happening to him. Shame as they’re stunning snakes.