My leopard gecko female has been developing eggs and last night she laid an egg in her normal hide (rather than her humid hide), I thought that it had a red spot but I left it because she had only laid one and I didn’t want to stress her out if she was going to lay a second. When I looked at it today the egg looked horrible and was gooey and the female had something around her vent. Right now I don’t care about the egg since there is no way it can hatch, I just want to make sure the female will survive. I’m going to try to get her to a vet but I’m not sure how quickly I will be able to do that. I moved her to a clean tub and kept the egg on the substrate so if I need to preserve, dissect it, etc. then I have it. 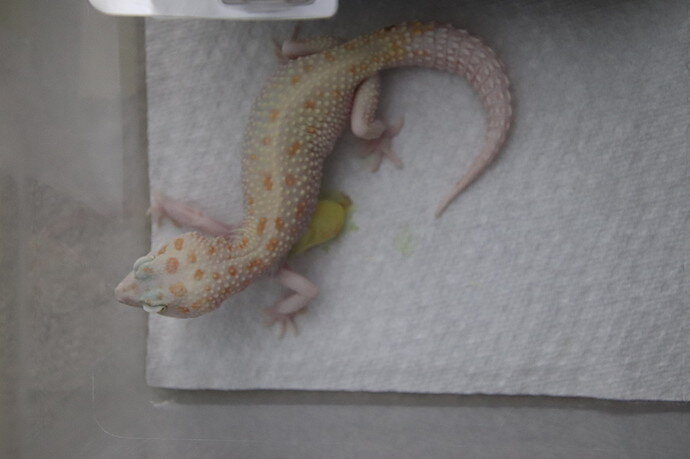 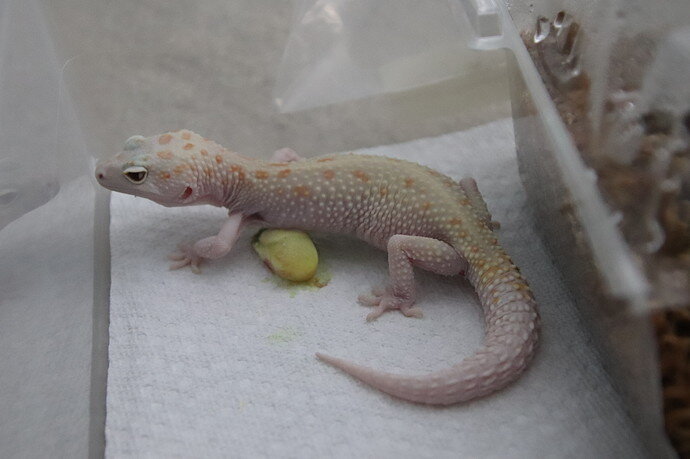 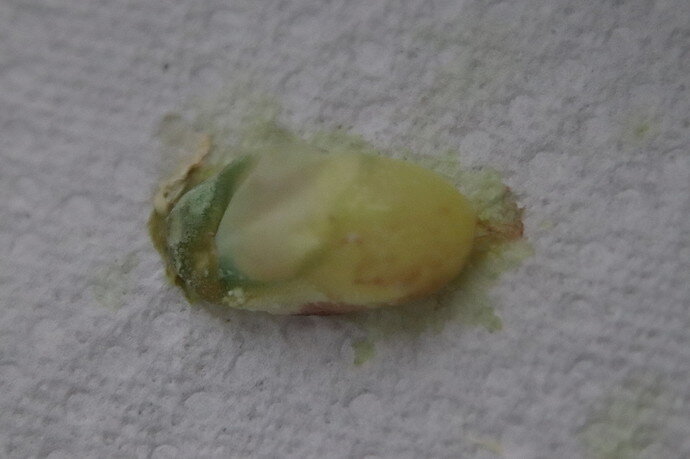 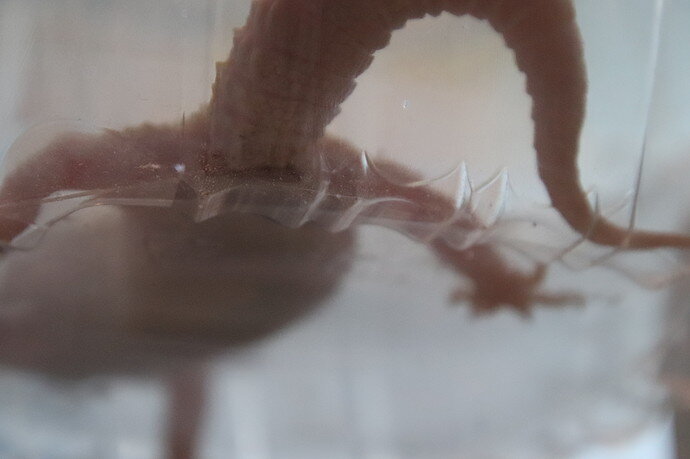 I did some research and it looks like first-time females will sometimes lay eggs in the regular hide and based on the description this is sometimes possible and not rare. They also usually lay 1-egg, infertile, first clutches which I knew before and possibly makes this less dangerous. I’ll also likely soak her for ~15 min later tonight.

You are right this is potentially a very serious situation, specifically because of the cloacal discharge & very abnormal egg. If she has goo around her vent, there are a couple things that could be happening- she could have a ruptured oviduct, other internal injury, or have a collapsed egg. I’m quite concerned that the egg came out looking so messed up- if there’s any chance that all the changes have occurred after laying, that’s a good thing. Since the egg was left out for awhile, it won’t provide quite as good info for the vet, but definitely grab it now & put it in the fridge- bring it to her appointment.

I wouldn’t soak her, as you don’t want any chance of water getting into her coelomic cavity if she has an injury, though i think it’s probably unlikely. She definitely needs to see a reptile vet. I just don’t know enough about eggbinding to give better advice. But I have 2 females that just went through this and are recovering from their surgeries. (They both had cloacal discharge, and one had a tear, though I don’t think those things are always present.)

At the appointment, make sure you mention the discharge & ask for a radiograph to see if there’s another egg & if there are any anatomic abnormalities that could account for laying trouble. She looks like she has W/Y, so maybe mention that she is a morph sometimes associated with neurological problems to the vet.

I just read this, I put the egg in the fridge on the paper towel (I cut the paper towel area off and put everything in the fridge) since it was stuck to it and some goo was on the towel. The egg didn’t stink at all and looked exactly the same as before so it might still be useful. I decided last night not to soak her since I wasn’t sure if it would do more harm than good. I was planning to request a radiograph since those would hopefully show the eggs. She does have W&Y and I’m making a list of things to mention/bring to the vet. She’s a first time female so it’s possible that she won’t physically be able to lay eggs. Depending how serious this is she will likely stay a pet.

There were a few other things about her that I forgot to mention. She hasn’t pooped normally for 2 weeks. She also didn’t eat for 3 weeks which I figured was normal and she lost a lot of tail fat (which I also thought was normal for egg-laying). However she did poop (?) a tiny bit and it was very watery and spread out over a few inches of the substrate. At first I thought it was diarrhea and thought she could be impacted. However now it could have been egg material and I saved the paper towel substrate that had some on it. Since I thought she was impacted I soaked her twice (the 1st and 2nd) and gave her a (light) massage. Now I’m wondering if that could have caused the egg problem.

Yes so it looks like your Gecko is young and just had it’s first lay that didn’t make it. First lays sometimes only produce one egg as well so she could have laid all eggs she had. It is easy to look under her belly to see if there is another eggs in there but more thank likely she only had one! Also… she looks a little small to be breeding

I might try to take a picture of her belly later to determine if she has another egg or not. Either way I’m going to take her to the vet just in case. It possibly was her only egg except it was leaking and there was discharge around the females vent. She was almost 65g when I bred her. Then she went on a fast and lost a lot of weight and fat (which I assumed was because of egg development).

Yeah a vet trip might not be a bad idea she should have kept her weight throughout her development. Was there anything else that changed diet, husbandry, another Gecko? I know I had to separate my male once I knew she had developed because he was always beating on her.

Everything was the same, I got another gecko but I had already had multiple in that rack from the same breeder, so it shouldn’t have made a difference. I read that females will usually go off food for some of the season and their tail is the first place that they lose fat. I only put a male with her once to breed, she’s never been cohabited with other geckos. At the time I did run out of dubias so I had to feed only mealworms for 4 days when she stopped eating. However, I fed my first gecko mealworms before I knew better so I didn’t think that would be a problem. I think impaction could be a cause because of that but the temperatures were fine and she’s had mealworms before so I don’t think it’s likely.

I went up to check her belly and she had laid another egg. There was also a few drops of blood but there wasn’t any more after that. This egg was also infertile so I put it in the fridge. She’s now only 45g (from 65g) so hopefully she starts eating. A local breeder recommended some methods to try to get her to eat but I’m thinking she’ll start eating since she laid. The breeder also recommended I give her a bath, since the second egg wasn’t abnormal hopefully she’ll be okay. The local vet will be open tomorrow but I’m not positive how helpful they’ll be since they specialize in small mammals and birds. It will still be worth a trip.

Hope your Gecko is okay

let us know what the vet says?

I called a few vets and by the time I found vets that actually take reptiles they recommended a bath and feeding her vitamins to fatten her up (which isn’t helpful if she doesn’t eat). I also got a recommendation to feed her fruit baby food.

I’m definitely not feeding a leopard gecko fruit baby food, however I might get turkey and meat baby food if I need to. The local breeder recommended a bath and keeping her tub humid for her to stay hydrated. He also recommended force feeding her or giving her a syringe mixture of food and yogurt. Last night I kept her tub humid and gave her a 10 minute bath (in which she gained a total of 1 gram, she should be hydrated). I tried force feeding her by rubbing the side of her mouth and putting water on her nose. She didn’t cooperate and if I had a dubia by her mouth then she wouldn’t open her mouth (stubborn). As soon as I put her back in her tub she started licking the water off of her nose. Whenever I tried to feed her she wouldn’t open her mouth but if I didn’t have food she would open her mouth (and treat my finger as food). I’m going to try to get her into the vet Wednesday but I’m not sure what they could do. I’m not too worried about an internal injury, mostly just her eating.

There are a lot of reasons she may be anorexic. I’ve had females do it during breeding season, and I syringe feed them Emeraid or Grub Pie slurry. I’ve also seen anorexia with organ failure, infection, cancer, and a whole host of other things. If you opt for syringe feeding, make sure she doesn’t choke/aspirate any slurry. Also don’t use baby food or yogurt- they’re super imbalanced for insectivores. Reptile vets usually have either Emeraid or Carnivore Care available to sell to clients but you can also order them online. Animals will often not eat foods that they have previously eaten when they weren’t feeling well, which is another reason to use veterinary insectivore critical care diets.

Edit: I realized that I didn’t phrase that very well. What I mean is that, if a pet is ill, and is assist-fed diet X while feeling crummy, then, once they are well again, they will often have an aversion to eating diet X for the rest of their life.

I kept her food light this time but she showed interest in eating after she shed yesterday. I started giving her 2 waxworms (which I thought would be good fat and she might eat them since she’s only rarely had them before). Then, since she was still interested in eating I gave her a few small dubias which she also ate. So she should be fully better now, I don’t think she’ll need to go to the vet (especially seeing how knowledgeable most of them were) but if anything changes or her next eggs are like this I’ll take her in.

Wonderful!!! If she is eating, that is a very good sign, very good indeed! Man I’m so glad to hear this, I’ve been thinking of her & sending good vibes her way. And agreed, it sounds like a vet appointment would most likely not be significantly helpful at this time, given what you’ve described.

Thank you! There was one vet that had good information but none of the other ones had useful information. So far I’m thinking it was just because it was her first clutch. If her next clutch has an egg that is deflated and looked like this one then I’ll definitely take her to the vet. But for now I’m going to work on fattening her up and hopefully her next clutch will have 2 nice fertile eggs and she’ll stay healthy.

Glad she is eating

At least now you know which very to call first, should you ever need a vet further down the line