I recently hatched a lesser het clown x lesser banana cinnamon clutch and was curious if clown had any identifiable traits as a het with any of the above genetics.

Clown being a recessive trait there is no identifying a het. This is the scientific definition of a recessive gene

The thing with pied is a debate, where some people choose one side and others choose the other.

But no technically there should be no “het influence” as it is commonly coined.

At the same time this hobby is very unscientific lol. This girl is just a pastel, with some hets thrown in there. 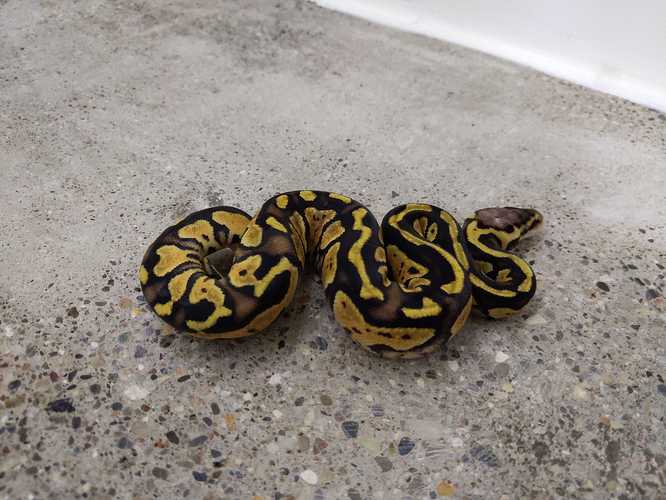 As for plain het clown I’ve noticed a general brighter color compared to normals and what I can describe as a sharp or tribal pattern to them. Not guaranteed, that info is about as useful as het pied train tracks imo. Best I can give ya tho. Also not sure if lesser or cinny would mess with the pattern, as they can sometimes.

Edit
Took a pic for ya, this is a 66% het that I’m extremely confident will prove out. I guess maybe I should save the sharp pattern description for babies, not so sharp looking grown up lol, still kinda tribalish, almost half way clownish. Not really sure what other adjectives I can use. 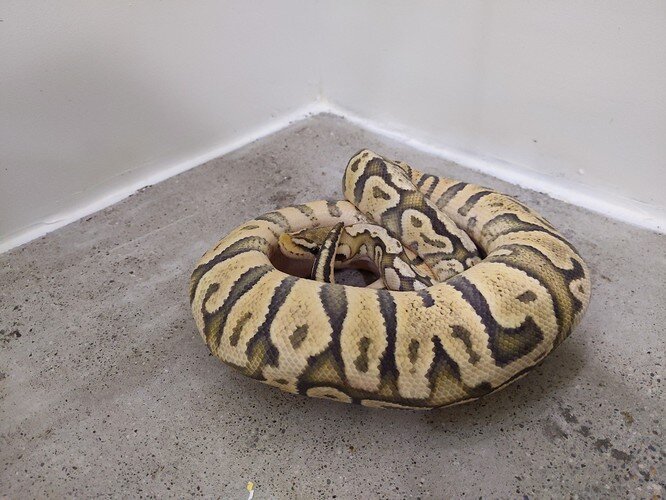 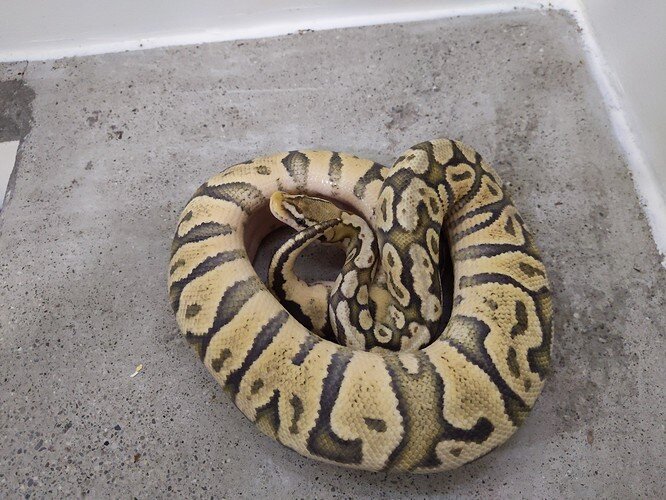 I think that het clown brightens a snake (no firsthand experience) but without significant experience and non-het clowns to compare it to I would say you can’t tell.

I’ve seen a few with hets and none that you wouldn’t notice a difference at all. You’d only know because of parents.

But every snake is different!

I would bet that with certain genes there would be some kind of interaction. Like the way with some genes het pied will make a distinct ringer. But you would probably have to have alot of practice with clown + that gene to spot it reliably. And even then it might not pan out, or show. As has been noted many times in several threads here, the ringer/hetPied connection is not 100%. So, I would guess the same would hold true with clown.
I have heard people mention that sometimes there is a trace of a headstamp, but I don’t think I’ve ever seen one in a picture that I could say.

I’ve found there is a common theme among experienced breeders in regards to the heterozygous versions of the big three recessives (clown, pied, and lav). Their het influence is described as subtle and lacks consistency to move the mutation from the realm of recessive to (co/inc) dominant but exists nevertheless.

Clown and Lav heterozygous influence are generally described as brighter and slightly “different”. Not necessarily easily definable differences but observable by experienced breeders. This could partially be the result of polygenic bloodline, something often overlooked by ball python breeders. Pied hets tend to have “tracks” running laterally in the lower part of the snake, usually leading near the vent, and sometimes “ringers” of white. Both ringers and tracks can occur outside of any pied but if its fairly pronounced (especially tracks) in a clutch of possible hets based on what I’ve heard from experienced breeders I’d say there is a good chance it will prove out. With pieds you might have a shot at picking them out but I’m a little skeptical with clowns and lavs. 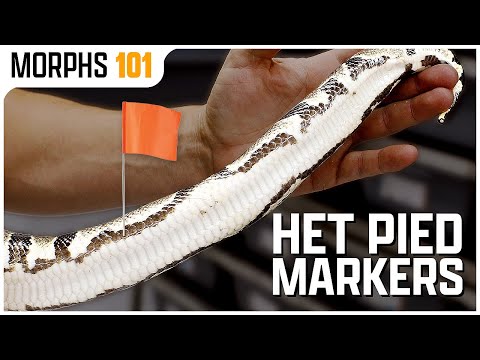 When het for Clown is added to many morphs, you can see an intensity in the coloration that is not what you might expect from a single gene animal of the snake. In other words, if you were to breed a 1.0 Normal 100% het Clown to a 0.1 Super Pastel, everything would be Pastel, but statistically you would only expect about half of the offspring to carry the Clown gene. In that instance I believe I could, with a pretty significant level of accuracy, predict which animals were carrying the gene. To me they would appear more vibrant looking than the those that didn’t receive a copy. If the same male were to be bred to a Normal female, I would still be able to detrmine with a level of accuracy that exceeds luck, which ones carry the gene, In a Normal het Clown, I have noticed that the white that outlines the alien heads is much more pronounced. Again, I’m not here to argue whether or not these genes are true recessive or some other condition. I am just stating that there are visible influences which I have been able to discern through experience. This is not to say that I may never be wrong, just that there are cues to be seen if one knows what to look for.

So my het clown banana I had who was very dull, was just dull for a het clown? Or would you say it doesn’t brighten bananas or other certain genes much?
I think it’s just a bit random in brightening or not.

I’ve had a look today at some other banana females as would like one eventually and the het clown ones look just like the normal ones IMO.

But I can see in other morphs it appears to be more bright, especially on darker snakes.

Banana in and of itself, can overwhelm or saturate the coloration. It may be more difficult to see the differences when trying to discern the influences that Clown may add through the banana coloration.

Would you say brighter or lighter coloured snakes would be harder to tell? Because they’re already bright/light then?

What I was saying. Experience counts, and what other genes are at play. But it’s nice to hear from someone who works with the specific recessive,. Thanks for the detail on how you spot it, too.

Don’t forget, banana/coral glow undergoes a pretty strong change in color as it ages. Likely that plays a role. Probably true for other genes that show radical color changes from baby to adult. Makes it fun, right?

I don’t believe that would be the case. In bright or dark animals on their own, I think you would still see the intensity and such. However, Banana acts almost as an overcoat to other genes in the same way that Ghost does. Ghost or Hypo can dull the individual coloration of the morph while still brightening the overall appearance of the snake. Banana just adds such a yellow overall look, that it obscures some of the other genes coloration, but not the pattern. A Banana Enchi still looks like an Enchi pattern and a Banana Mojave still looks like a Mojave Pattern. But the coloration of an Enchi or Mojave is lost in the overall Yellow.

I will say that my wife’s pet normal female was tentatively labeled by the original breeder as a pos het hypo, with the hypo coming from several generations back, based solely on her “brightness.” We got her just because my wife liked her, not for the possible gene, but a year later, she’s still “brighter” and “sharper” than other normals. Maybe someday I can convince my wife to let me try to prove her out.

Yeah he was a bit brighter as a baby so suppose why so dull as an adult then!

Interesting to know all this as when we had a clown and het clown not something I knew!

That’s why I love banana so much, I am getting a female bamboo as bamboo bananas are another I love, I love how the yellow comes out.

Enjoying this thread though as I know the pied influences as our gets had the track markers.
But this clown influence is all so knew!

Makes me want to go for the female het clown banana to produce them but also see the influences! Amazing!

I always felt like the “olive” tones in bamboo enriched the yellow of the banana. I have a bamboo x Super coral glow pairing I’m waiting on now to see if the same thing happens there. Added kicker, the bamboo is also HRA, so I’m hoping the darker parts will stay abit darker for contrast.

Oh I agree, think it’s an amazing combo!
And I look forward to seeing what happens with them, a lovely mix!

All this Makes me wish I didn’t give up royals a few years ago now! We had 12, and we’re about to start breeding but decided Cresties was our thing more, which it still is. But I’ve decided a 2nd Royal was needed. Need to try not get so addicted again as my gosh they are amazing snakes!
But I do miss my Crystal I had, she had amazing white and blue eyes!

My daughter’s favorite is her crystal. I like them all… too much.