Hello… Super interested in these giants. Would love to breed some, but wanted to reach out to you guys to see what you know about them? Does age have to do with the size? I’m sure genetics is the biggest factor. Thanks, and many blessings to you all.

Voltas come from a specific region. Near the volta river or something like that.

And I’m with you. I would love one! But so would every other guy and gal and their dog! My husband and I are planning a trip to Africa so maybe we will stop and have reptile hunting adventure…

As far as I know. The size is due to their location and genes play a role. I’m not sure if it is passed on to the offspring but I have heard that 50% of the hatchlings will be voltas. They can also have up to 20 eggs per clutch and some breeders have them to give them the bigger clutches.

First, “sub-Saharan” is a misnomer as the entire range that ball pythons inhabit is geographically below the Sahara which make all ball pythons sub-Saharan

Volta is a locality of ball pythons. It is named for a river, as Grace guessed. Animals collected from this region, in broad terms, do seem to be larger than what we consider “normal”.

Now, whether this is a population specific trait or if it is just that the region, historically, has not been hunted as much and so the animals there are a more true representation of what a natural wild ball python population looks like and the hunters that do get out there know they can fetch a premium for a really large animal so they focus their catches on them, is not particularly clear.

As for the genetics of it.These are probably best thought of in the same way you would with dwarf and super-dwarf retics. Size has a genetic component but, unlike the morphs we are most familiar with where it is one gene = one phenotype, the trait is polygenetic. So when you breed out a Volta animal you are not going to get to get a nice even 50/50 split clutch of giants and normals but instead you will get a clutch of animals that tend to be larger in size. If you continue to breed these larger stature animals together then you enrich for those genes that contribute to large size and so you maintain the large-stature animals. If, however, you pick up one of these larger animals and breed it to a smaller-stature animal in your collection and then breed those offspring to smaller-stature animals in your collection and then breed those offspring… Well you get the point. The end result is that you dilute out the genetic component that contributed to size and you end up with animals that are no different than the majority of the balls in the hobby.

Does anyone have experience with volta here? Are their care the same as " normal " balls except taking in consideration they do get bigger so bigger meals and larger housing?

ahha volta river is in Russia!

Care is no different. Except, as you note, the potential need to account for a larger bodied animal

I would agree with everything Travis stated above.

Everything I’ve heard about “Volta” balls has been speciation. Given enough time, most older females can reach these “abnormal” sizes. I have several Pied females ranging from 4500-5000+ grams, all of which came from a female het Pied that last weighed over 7800 grams. Babies from the original het pied female pictured, average 84-86 grams with several over the years hatching at 120 grams right out of the egg.

I also have a few girls, unrelated to the Pied line I have, weighing in the 4000+ gram range.

Take it for what it’s worth. 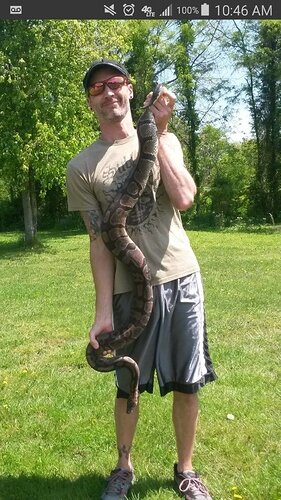 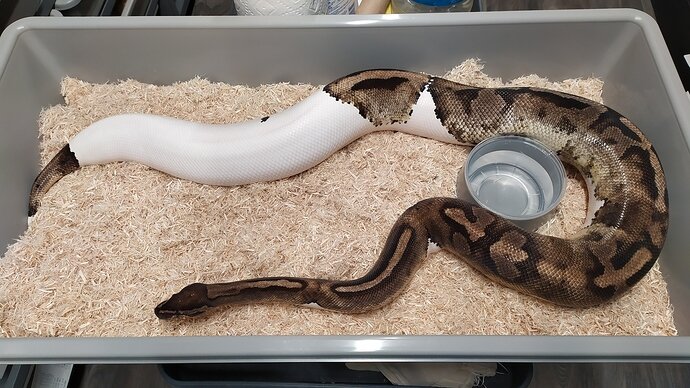 I’m currently working on a project of “Zio River” ball pythons from Steven Tillis. He actually went out to a remote village in the Volta region of Togo and brought back a group including a 6’2 female with a head like a small Burmese python.

It should be noted that not every ball python from this area is massive and it’s entirely possible that the giants are 20+ years old. I’m sure giants exist outside of the Volta region which in of itself makes up a pretty large percentage of Togo.

I’ve seen both sides of the Volta argument “they are just super old normal females that got big” vs “they are a completely distinct population of giants”. I think both sides have some weight. There is a genetic link to size like Travis said. Its why a Madu retic will be smaller than a mainland retic. And the remote areas from the Volta region allow females to avoid hunters long enough to actually get huge. If people didn’t hunt ball pythons all over Togo there could possibly be a handful of giants all over Togo.

I think what are marketed as “Volta” animals are the old “Normal” females that have the genetics and the age to be at the top of the bell curve when it comes to size. Kind of like how the NBA is full of “normal” humans that are 7 feet tall. I think with careful selective breeding you could make a line of monster ball pythons in a few generations