I have a female super cinny that ate like a retic up until 2 months or so ago when she went off feed (normal this time of year for me). I then used the old trick of introducing a male (the one I’d breed with her just in case they’d lock) to trigger her to start back on feed as this has worked for me countless times without an issue.

At this time she weighed about 2450g and this occurrence was approximately 18 days ago. She did lock with the male and I was forced to leave him in there for a full 12 hours. I thought a bit about it and then said, well we’ll see what happens! Then promptly the next day she ate and the week after that…

I went to feed her 3 nights ago and saw her “sunning” her belly aka laying on her back (See pic 1)… I then opened her tub this morning and saw her coiled like she was gonna lay (see pic 2) She also started going into shed 5 days ago… what is going on here? I’m very confused…
Pic 1 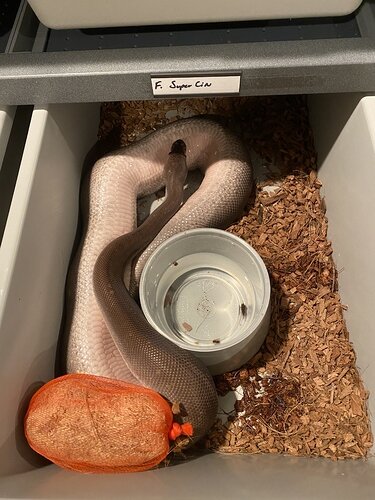 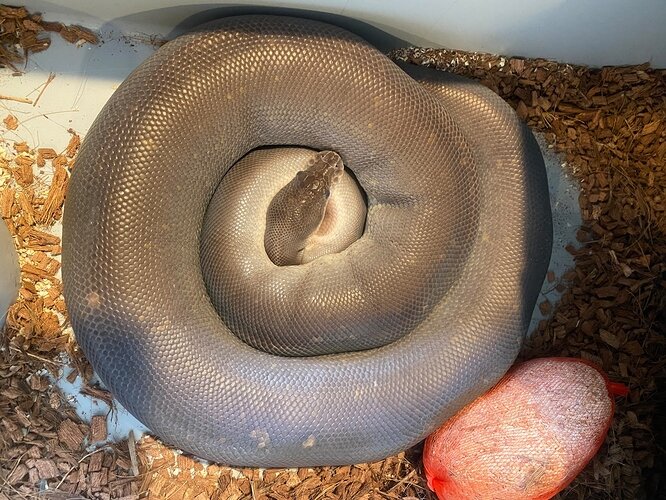 image2016×1512 1.53 MB
I feel like all of this is moving very fast but I could be wrong… I am a new breeder and am probably making a mistake here but that’s why I’m asking! I just wasn’t expecting to have anything on its way until much later in the year. This community and YouTube has taught me everything and I’m very thankful for any and all thoughts.

She could just be showing signs earlier than most females but a girl her size wont be harmed if she went off food for the 2 month period you mentioned. Some of my girls show signs like yours rather early compared to my other girls so it could be as simple as that but I’ll let others chime in because I might be missing something.

Just curious… What is that orange thing in your enclosure? Best of luck with your beautiful animal!

This is what I assumed, that she was showing sooner than most, however it just seemed to happen very soon after her lock with my male. Only time will tell I suppose! Let’s see what others have to say… just checked in on her and she’s all curled up, tail out and head in the middle over her heat. I’ll stop bugging her until tomorrow afternoon for a quick check-up.

The orange thing in her cage is a bit of sphagnum moss captured in a netting material, helps keep the humidity up just a bit during the shedding process. I’ve found over time that it’s less invasive than me mildly frightening my friends and giving em’ a few squirts from a mister haha. This is removed post-shed to alleviate my mind of any of the little guys accidentally eating it during a feed ha.

Is that onion packaging? If so that’s a brilliant idea.

That’s almost exactly what it is however this
Netting expands like no ones business making sure all the moss is captured very well. Once the moss is packed I just tie it off with the excess so I can re-use the netting once I change out the moss. I’ll try to find the link on amazon again later today, it’s helped out immensely for me.

A moss onion… that is an absolutely brilliant idea! Ty

Great idea with the sphagnum moss!

Did she breed last year? Could she have retained sperm?

She did not to my knowledge but she was with another reputable breeder at that point in time. He said she was not with any males in his possession and I trust that statement. I’m going to see how her feeding response and tub location varies over the next few weeks and take it from there! I tried to palpate her today and felt follicles present but due to my inexperience its hard for me to infer on the results.

I just purchased a used/broken glass fridge to do an incubator build and I will be posting a nice and very detailed write up on how to do so. I keep seeing poorly written DIY’s and none that are for the laymen with all the steps and components start to finish (someone feel free to post one if you know of a good one!).

I don’t have any write ups but I started watching Jason with Morph Mixology on YT he is pretty much completely DIY and I’ve found it helpful. Just watched the incubator build video today actually!