I want to start this off by saying my girl does have a vet appointment on the books. Just have to hope its something that can wait until Tuesday, because that’s the earliest my exotic vet can get her in.

A month ago I got a new hognose snake, Freyja, my female arctic conda. She had a rough start with me with eating. She has eaten for me 3 times, the first two times was only a head of a f/t pinkie. The last time I got her to eat the smallest f/t pinkie I could find. She eats weird like she doesn’t know how her mouth works almost. She will open just a little bit, bite, and then jerk her head away. She just refused another meal for me yesterday. When she came in she weighed 7grams. At the time of this post I have not weighed her because my scale is charging, but she doesn’t appear much larger.

The eating is a cause of concern, but it is not the biggest issue. She has been exhibiting some abnormal behavior lately. She seems to have a difficult time keeping her head right side up. I see her a lot on her back with her belly up moving around. Looks like she is trying to figure out which way is up. She has also started glass surfing a lot, doing the same thing with her head. I am pretty concerned about her. I have heard of this type of behavior in other species of snakes, but never in hogs. Don’t know what else to do at this point but get her to the vet and hope for the best. Sometimes she seems fine, curled up in her hide or under a leaf or just scootin around exploring, then sometimes she can’t get herself right side up.

I have attached a pic to show what I mean. 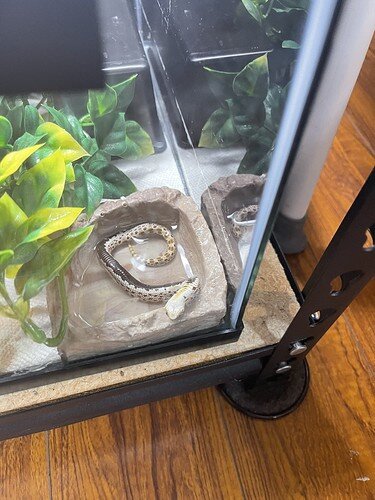 She does this a few times a day, for a few minutes at a time, before she rights herself and goes on about her business.

Does anyone here have any experience with anything like this? Like I said, she is going to the vet on Tuesday. Hopefully they will have some more answers for me. I am worried about the little noodle.

Hognose snakes are famous for playing dead. Could this be what it is? Is there a reason she isn’t kept on substrate? I think substrate would help her feel more secure which would help this (assuming it is actually playing dead) and help feeding.

Im gonna agree with @erie-herps , If the snake feels scared you can add a backround tooo

I’m new to hognoses to, but she definitely needs to feel secure in her surroundings. Ditch the paper towels and get some substrate asap and give her plenty of hiding spots and black out the back & sides to make her domain feel smaller and safe. Hope this helps and she gets better for you🤍

A tiny hognose like this needs to be kept in a smaller enclosure to help it feel safe. I would say put her in a small tub with substrate and small hides, not a big one like what is in there. If she is playing dead a lot that means she is stressed and scared. Hognoses are not display snakes when they are babies, and are not good for tanks like this that are open without substrate. She could, maybe, have a lack of nutrition if she is really thin.

At 7 grams, I’d move her to a 6 qt tub. I have 10 gram hatchlings that I start in tubs 12" x 6" x 3", which is still bigger than what a lot of other breeders start hatchlings in. The size of her enclosure looks like it could be overwhelmingly large. I understand the need to quarantine, I keep hatchlings on paper towel for the first month or two and have no issues. I don’t think you need to switch to aspen yet, especially not when you’re experiencing issues with her.

Have you used any aerosols or pest sprays/strips around her? Neurological issues are not uncommon in hognoses, often manifesting after exposure to mite treatments, pest strips, etc. However, I have seen a handful of video clips where hognoses weren’t exposed to the above and were born with neurological issues

Thank you to all who reached out.

The picture is deceiving. That is a 2.5 gallon aquarium measuring 12x6x8. I do have the sides blacked out with adhesive vinyl on the outside of the glass. She has that black hide a length of pvc tubing and the plant pictured takes up the entire length of the tank and half of the width. The angle was weird to show her behavior. I have 3 other hogs. I know what playing dead looks like. This is not it. Something else is going on.

There has been no mite problem. No pest strips or aerosol sprays. The paper towel is because quarantine. I purchased her from mm and just wanted to be better able to monitor her droppings and make sure there were no parasites.

It’s not always her whole body flipped over like that. Sometimes when she is glass surfing she will lose control of her head and end up upside down and struggling to right herself.

Hmmmm, This is some kinda issue idk of.

I want to add being on the bottom of your rack probably doesn’t help either if she is playing dead a lot (if that’s what it is).
She can see everything, footsteps also, noises etc. So I’d move her up. And add substrate, more hides and coverage to make her feel more secure.

Her heat mat is on a thermostat set to 90. Only ever gets to high 80’s on the hot side. Room the tank is located in is temp controlled to 78. Cool side is low 80’s. Is there a difference in temp for babies and adults? That’s the same temps I keep all of the other hogs at.

Do you have a temp gun to check the temp?

That temperature sounds fine. An IR temp gun does help to check hotspot temperatures and I use mine daily. It could be from a previous high temperature but there’s no way to know.

I do have an ir temp gun. It’s night time for them so I’ll check in the am.

Thank you. The reason is that how I have my probe set in my holding tub is that when it reaches 83* the heat mat/pad is 88-89*

First of all I would try adding 3-4 or more if you want inches of substrate as hogs are burrowing species and this could be stressing her out causing her to possibly be playing dead and not wanting to eat or this could be some weird 1/1000000 Neurological issue but I really hope it is not, hope this helps!

Hmm, you say you’ve had issues since she arrived, is it possible at all that she may have been exposed to excessive heat in transit? It does sound neurologic.

My only other thought, that is totally out of left field, is if you have a carbon monoxide leak or something.

It’s been a day. I did check this AM. Back of the tank is the hot end at 85. Front of the tank was at 77. Not quite the gradient I thought I had but that was when the heat mat was off and had been off for a while.

I will try some substrate tomorrow. I’ve never had a hog that absolutely had to have substrate in quarantine before, but its worth a try I guess. I am leaning more towards some unknown issue, unfortunately. This is not my first hog and I am following the same proven methods that I brought the others up on. I have lost one in the past that was as small as my new girl. He would not eat and my vet did not have any available appointments. He couldn’t hold on until his appointment. I probably waited too long to take him in. It was a sad learning experience, but apparently one I needed to learn. Not playing around this time. It’s been a month and something seems off so off to the vet she goes. In my vets defense it was peak covid and things were all off kilter everywhere. They are usually way better about getting people in. Especially people like myself with 15 animals, reptiles and mammals, and they see every single one of them.

I do not believe she was exposed to excessive heat in transit. The shipping process was smooth. Overnighted, held for pick up at the hub. I was there within 30mins of receiving the notice that she had landed. The seller also shipped her with a cold pack in the box as it was early August temps in upstate NY. It was separated from here by a lot of newspaper and a thin sheet of styrofoam. Shipping seemed to be spot on for this girl.

I do not believe we have a carbon monoxide leak in our house. We have a CO alarm in the house but it is in the basement. I feel like if that was the case we would have much greater issues than one snake out of 12 kept in this room displaying these types of problems. All of the other animals are status quo. My male arctic conda has developed a hatred of me and my girl, but he is still eating and behaving as usual.