I recently came in to possession of a hatchling (pastel pewter het pied) who has a bit of wobble in head and neck but otherwise functions well. She was purchased for my future breeding project (3 years out) My question is this: Is it irresponsible to ever breed this snake? Seeing as this would have most likely come from a spider gene, would it be bread out or have a higher potential of carrying over?

thank you in advance for your input.

If your animal is Pewter het Pied there is no spider gene involved. Pictures will help us help you on that part.

Is it irresponsible to ever breed this snake?

That depends on the severity of the wobble. Is it stress?, Is it a incubation issue?, is it illness?..

If you can post a video on YouTube and link it here we can attempt to help.

As a side note, and I’m not being picky, Pewter is Cinnamon + Pastel. So it’s not a Pastel Pewter, just a Pewter het Pied.

So it’s not a Pastel Pewter, just a Pewter het Pied.

That depends. Some breeders mark black pastel pastels as pastel pewter to distinguish it from a regular pewter( cinnamon pastel).

As for if it’s irresponsible to breed her, that’s your call. All depends on what you think is ok to do. Many people hate spiders, I particularly love them so I bred them in the past and made any buyers who weren’t aware they had a wobble be aware of it. But unless your combo has spider in it, or another gene with similar issues, your wobble from your snake is most likely husbandry related or stress related.

That’s how they should be marked I agree, but I have seen some mark them as pastel pewter then when I ask for clarification they say it’s a black pastel pastel.

As Thomas notes, the wobble associated with Spider is a secondary side-effect of that gene, not some independent and unrelated thing that can be passed along by itself. So if your animal has “wobble” it is either also carrying the Spider (or related morph) gene or it has some other ailment that is causing the wobble.

External factors that can cause wobble are extreme heat, exposure to toxins, trauma, and the like. Internal factors can be birth defects, infections, and such.

Seeing the actual behaviour in this case would be helpful. Also, a picture of the animal and what the breeding was that produced it

I’ll be sure to get some video and images tonight. I haven’t purchased from this breeder before however, as Im just starting to build my base I’m trying to not buy more than 1 from any given breeder to avoid complications and inbreeding.

Pewter is Cinnamon + Pastel. So it’s not a Pastel Pewter, just a Pewter het Pied.

On a side note, when cinnamon was first produced by greg graniani in 2002 he called them Cinnamon Pastel. The pastel part eventually dropped off, probably because it was confusing to some. Especially when he produced the first pewter in 2004 and it was called Pewter Pastel.

That depends on the severity of the wobble. Is it stress?, Is it a incubation issue?, is it illness?..

If you can post a video on YouTube and link it here we can attempt to help.

Those are definitely possibilities that should be looked into but I remember awhile back a user asked a similar question and it turned out that their snake didn’t have wobble at all. Since it was still a baby it would wobble only because it still wasn’t fully coordinated and also because it couldn’t hold its neck entirely steady when outstretched. I suspect this may be the wobble that the person is seeing. There really shouldn’t be any other reason unless it was a incubation problem. Even if it was stress related me and you both know there are ways to curb wobble caused by stress but even then I don’t think it applies to this animal to have wobble from stress.

so here are her pictures, she wouldn’t wobble on command for a video. She was sold as a black pewter pastel.

That’s a black pewter bee (black pastel + pastel + spider). That’s why she has a wobble.

This combo is also sometimes call a black widow.

Yep makes total sense now. I just hope the OP knows that spiders and spider combos can still thrive if given the proper setup and care and doesn’t lose interest in the snake just because it has spider.

I was gonna say, she looks VERY similar to this baby I just hatched out: 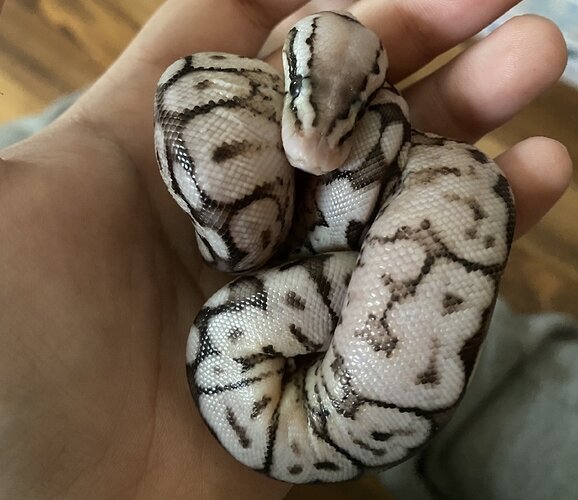 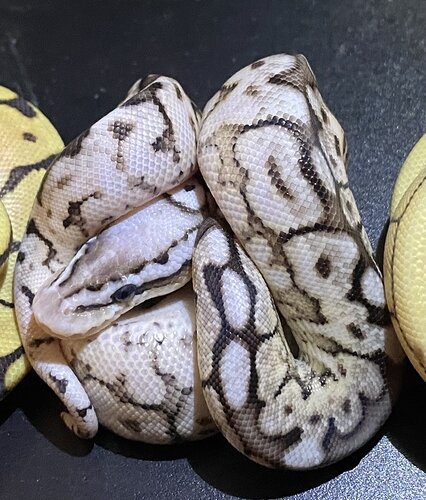 Though my girl is a regular pewter bee (pastel + cinnamon + spider), produced from a butter spinner x pewter pairing.

Though I will be looking to breed down the line she is still my baby, still beautiful and if anything just a little more special. lol she falls right in line with our other special needs animals a Shetland pony with COPD, a cat with herpies and a blind duck. Nope won’t loose interest I was just looking for advice responsible breeding.

I didn’t mean what I said to jab at you or mean anything bad by it. It is just that I see too many people that are new not want their snake once they learn about the spider gene. Glad you still love her even if she may require a little more patience!

Spider isn’t the only morph that has a wobble, just the best known.

Travis could definitely do with brushing up on some genetics

Betty, let me introduce you to Dr Travis Wyman, our on hand geneticist/genie.

For anyone wondering what the other wobbly morphs are … Morph Issues

A fact of which (as Thomas insinuated) I am well aware. However, the OP brought up Spider in their post so bringing up all the other morphs that also have the potential for exhibiting the trait would have been a pointless excess of over-information.

For anyone wondering what the other wobbly morphs are

I could add another morph or two to that list…

Good day Dr. Wyman ,
It is nice to meet you. The reason I mentioned other morphs that can cause wobble is because the OP seemed to indicate that there must be spider in the snake because the snake has wobble.