Wondering if a ball python can get cataracts? 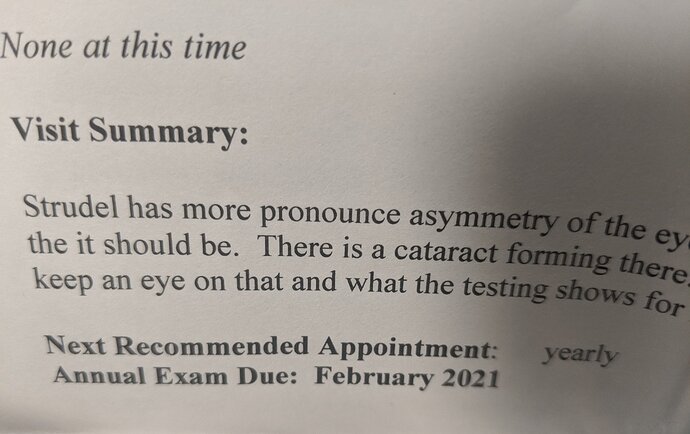 The note above is for a female we have with an unknown age. We took her up to the vet to look at one of her eyes that didn’t quite seem like the other and seemed to have a cloudy spot even in bright light. The asymmetrical skull is unrelated, doesn’t bother her, there’s no swelling, etc. You most likely wouldn’t notice if I didn’t point it out. Probably not from an injury. Just grew like that.

She’s been this way since we got her. Probably just old age.

Edited to fix the picture.

Most animals can form cataracts, which isn’t that surprising.
Do you have a specific morph for this ball python?

It would be interesting to see if like in 5 to 10 years someone else says their snake has cataracts.

Most animals can form cataracts, which isn’t that surprising.

Technically anything with eyes, right?

Thanks for pointing that out.

You don’t hear much of cataracts or vision related topics when it comes to reptiles. Do your snakes have any cataracts? Do you have a vet that can check for them? It just isn’t something that comes up very often and I guarantee that if I posted her face to Reddit, etc, or even here someone is going to claim it’s a stuck spec.

I didnt have a morph in mind, but I can see why people could jump to spider quickly for it since it’s current on the hate train.

I bet there are some species that cant get it. Like cats are more unlikely to develop cataract than dogs; which is still just wild to me.

I’d assume your snake would still thrive if it had cataracts right? They do have heat pits after all to “see” their prey and they also have the sense of smell as well. I dont think itd be much different than a snake going into shed as far as sight goes.

I didnt have a morph in mind, but I can see why people could jump to spider quickly for it since it’s current on the hate train.

I bet there are some species that cant get it. Like cats are more unlikely to develop cataract than dogs; which is still just wild to me.

Oh, I mentioned spider not because of the normal outrage but because it specifically affects the neural crest in a lot of very strange ways including facial deformities (remember I mentioned a facial deformity in OP) as well as melanin. I just assumed.

I can see how it would be interesting if a larger number of a specific morph developed cataracts but I’m not sure how they would.

I’m no ophthalmologist but I think anything with eyes can get them. The more common cause is just age but cataracts can be caused by injury, too. It’s just a generalized term for “foggy eye lens”, yeah? Age, some diseases both genetic and developed, injury… all can cause cataracts.

I’d assume your snake would still thrive if it had cataracts right? They do have heat pits after all to “see” their prey in the dark.

Out on the interwebs I think both Snake Discovery and BHB show off their eye-less snakes that have no problems locating prey.

Exactly my point! I saw those vids as well and those animals had no problem locating their prey.

And here is another side of the coin to this topic. Wouldn’t the animal also adapt to it’s new challenges of vision? Eventually it would rely on just smell to locate food

@asura can you try and post a photo of the snake and the eye? I just want to see what it looks like. I’m stupid curious now haha 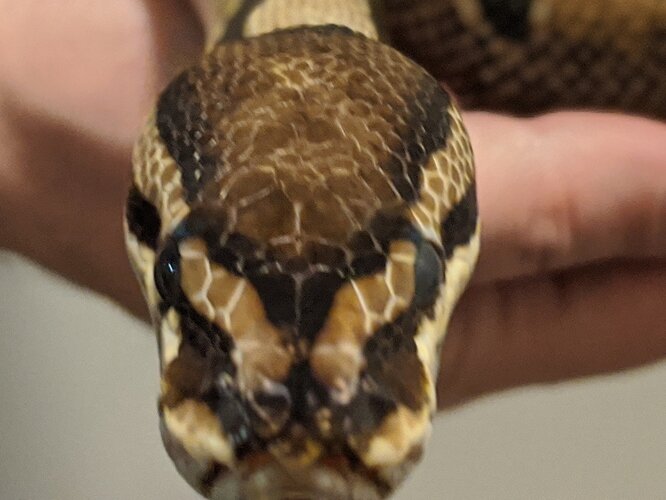 This is probably the best picture I have. It’s hard to take a picture of her perfectly head on.

You should be able to see how one eye orbit is a bit lower/asymmetrical. I think I mentioned you wouldn’t notice at-a-glance.

In bright light it does look like a stuck spec from head-on. From other angles you can’t see it.

Edit: Oh, and as far as I can tell she can see out of it without much issue. Sudden movements on that side gets the usual response and she doesn’t really run into anything or trace the wall of the enclosure on that side. 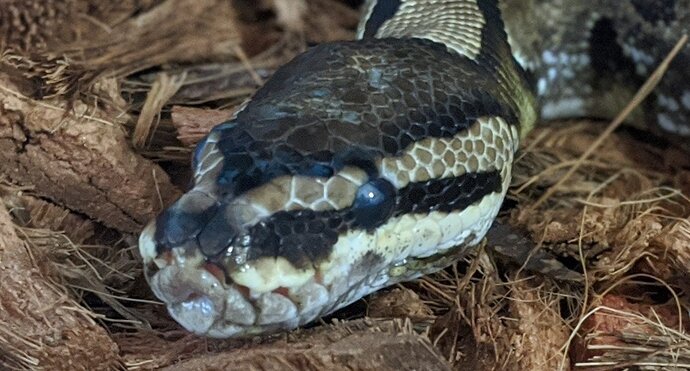 I know monitors and some stuff can develop cataracts from heat lamps, maybe other kinds of artificial light can bring this on as well it might not hurt to switch him to just belly heat if he does have a lamp

That’s true and a good point. As far as I know this girl has never had extended exposure to any sort of Mercury vapor UV or florescent UV lamps.

I get paranoid with the coil style lamps. If you put some of them under a UV meter they’re off the charts with radiation. I have no idea what that might do to ball python eyes.