I was hoping someone here could help shed some light on an issue I’m having with one of my ball pythons. Occasionally, I notice that his jaw is swollen. It looks like a bee stung his little face.

His name is Gomez and he’s just under 2 years old. He’s a cinnamon mahogany and has a sweet temperament. He eats well - currently eating frozen thawed small rats.

Initially, I thought maybe he was allergic (?) to the substrate I had him on so I switched him to something else but the problem has persisted. I plan to switch him back to his original substrate this weekend, reptichip, because it keeps humidity better.

The interesting thing is that I notice swelling every few weeks. At first I thought it was after meals but it seems to happen regardless of when I feed him now. The odd thing is that it does not seem to affect his quality of life. He eats well, he does not seem in pain, he has plenty of enrichment and water. He seems so normal…except his bee sting jaw, that is.

Can someone tell me what they think?

Looks like it could be an abscess. Would be something a vet would need to have a look at. Anything visible inside his mouth when you open it and check? This can be done gently with a credit card.

I have checked his mouth with a credit card and it looks normal but it can’t hurt to try again. I’ll take a look and see if I can see anything new this time. Thank you for the advice!

It’s likely an abscess. @trnreptiles I believe it was you that had a snake with quite the abscess issue early this year, right?

My girl Butters did have an issue with swelling around her abscess, but she hasn’t had that happen in awhile.

It seemed to be caused by some sort of irritation, though I’m not sure what it could be with your boy.
Are there any noticeable lumps in his jaw? Or is it just swollen?

Either way, I would definitely recommend a vet visit to have it checked, in case it’s some sort of bacterial infection that is causing the swelling. Fortunately Butters did not have any unusual bacterial growth in her abscesses, so it’s not too much of a concern for me. 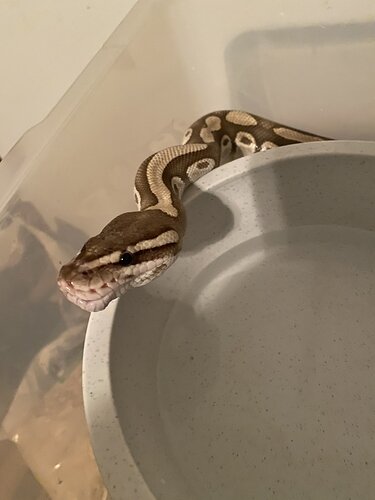 This is her as of a week or so ago. Her abscess came back even though I spent a lot of money on getting her worked on

I had no idea. So is it going to be some kind of permanent condition with her where it flares up every now and then and has to be drained? That doesn’t seem right…very strange.

Same deal with her tho correct if I remember correctly she never seemed sick or in pain or anything right?

I’m not sure at this point.
Half of me doesn’t want to neglect her abscess or for people to think that I don’t care, but the other half doesn’t want to waste money on it if it’s just gonna keep coming back… and if it’s not causing any issues for her.

The thing is, she does still act like her usual self; she eats and drinks just fine, and the abscess doesn’t seem to be causing her any pain or discomfort. She’s super sweet with handling and an absolute monster with feeding, like she’s always been

Edit: Not to mention she laid a healthy 7 egg clutch for me last season, and seems to be developing follicles again. Females don’t lay eggs unless they think they’re able to, so that must mean something.