At a Loss at What to Do! (Injured snake, icky photos)

This is a bit of a longer story, but I am at a loss here, argh.

So a few weeks ago a distant friend of a friend heard I kept ball pythons and knew my way around them pretty well, and he asked for some help with his snake. He told me she was a little hissy and whipped around a lot, and I offered to swing by and see if anything was up. He showed me to a tank with a wooden hide, aspen bedding, a small water bowl, and a branch. I picked her up no problem, but she was absolutely dry and crinkly with layers of stuck shed. Gave her a warm soak and started the process of rubbing it off her, but when it came to her belly I realized the skin was very thick here and covering an extensive thermal burn (hot mat on glass, only one hide over the heat…). I got the shed off her, made sure she was sanitized, then told them to get her in a tub with paper towel, apply some plain aloe vera and monitor her closely (the mother didn’t want to take her to the vet). I’ve treated a burn successfully on a rescue using F10 and aloe as our current reptile vet was out, so I wrote down the instructions and left. This is an image from about 2 weeks ago when I visited again: 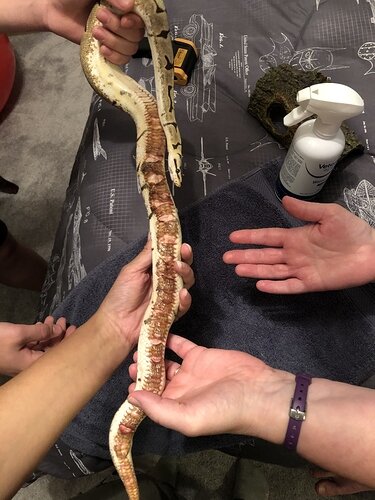 You can see the pink and healing skin beneath the scabbed and damaged scales. At this point it was looking better. However, he wanted to give her up (he didn’t really want her much in the first place because he was afraid to handle her with her hissing) but his mother kept telling him to “give her another chance.” At this point they still had her in the same tank, so again, I suggested they get her into a tub, clean the bedding. I gave them a left over hide for the cool side and helped them clean her off again as she had aspen stuck in the scales of what was healing. They also said that they tried feeding her, which I was also a little mortified at as the mother joked and said the snake had become friends with the LIVE rat they left in there for days. I firmly suggested they swap to frozen/thawed or at least pre-kill the food. I left again.

This morning I was sent an update photo: 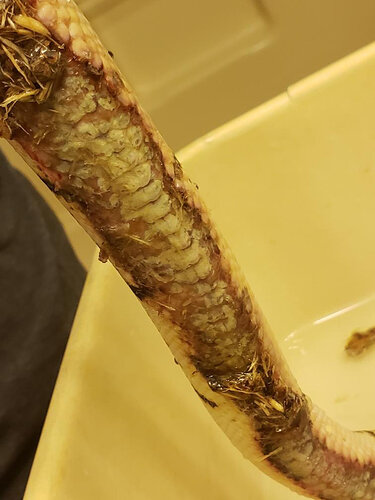 The lighting isn’t the best, but you can see there’s STILL ASPEN in her wound and it no longer looks healthy. I’ve just sent one of my boarding snakes home to his owner and now have an open tub, but with the mother’s insistence that she stay with them, I’m not sure if they’ll even let me buy her off them. They clearly haven’t been doing anything I’ve tried to suggest.

We currently live in PA, USA, and the laws on animal abuse applicable to this situation are as follows:

(a) Offense defined.–A person commits an offense if the person fails to provide for the basic needs of each animal to which the person has a duty of care, whether belonging to himself or otherwise, including any of the following:

(2) Access to clean and sanitary shelter and protection from the weather. The shelter must be sufficient to permit the animal to retain body heat and keep the animal dry.

(1) Except as set forth in paragraph (2), a violation of this section is a summary offense.

(a) Offense defined.–A person commits an offense if the person intentionally, knowingly or recklessly illtreats, overloads, beats, abandons or abuses an animal.

(1) Except as set forth in paragraph (2), a violation of this section is a summary offense.

As I am the only person outside their family that knows what’s going on with her they would definitely know it was me. The kid’s really nice and seems like he really wants to surrender her as she isn’t the right animal for him, and now this, but the mother is just a nightmare. I don’t want to seem like an absolute wretch and really ruin that friendship with the person who introduced us or with them, but god, I can’t let this poor snake die like this. I’m not very good with people, but this situation is just sucky.

EDIT: Thanks for the suggestions, the last message I got was “Nah, she’s fine now” and then when they got home they found she had passed away before I could really get any outside help. Heat mats and glass just don’t mix.

Very sad. I don’t see that animal making it. I am a very cut and dried blunt midwestern boy. They can choose to give up the animal or I’m calling animal services. I don’t need a friendship with people that would willingly subject an animal to that kind of treatment. Maybe harsh, but I gotta sleep at night.

sorry you’re in this spot.

But again, if you know it’s happening and you turn a blind eye I think you are somewhat culpable. So I would really urge you to do the right thing.

Gotta admit that’s the one thing that does give me some pause about getting into breeding, the thought of selling an animal to someone who might neglect or abuse them like this makes my stomach turn.

I just feel like enforcement is so lax with reptiles around here.

Yeah, we’ll save a cute puppy or kitty, but ick, reptiles. I’ll see if they’ll take my report.

Yes but if you report and they don’t do their job then at least it’s all on them not you. I agree it’s a sucky place to be in but you gotta do everything you can. Good luck that’s just my 2 cents.

Also @nocturne_reptiles I’m still pretty new to the hobby so maybe double check with someone else but I think with a wound like that if you did get her from them you should keep her on paper towels for awhile til it heals and change them out very quickly so it stays as clean as possible.

I’ve sent them a message; if I am able to get her here I’ll be sure to do so. Thanks for the advice!

Sadly this animal is past homemade remedy or care, the burn is so severe it will require Silver sulfadiazine and antibiotics which are often required in the most severe cases.

They need take the animal to a vet, or surrender it or have it euthanized.

You can contact animal control and based on the pictures and the law in your state they may do a welfare check however they are in no obligation to let them in unless accompanied by a law enforcement officer but that is a lot harder to do.

Thank you; I will look into those options. She’s a really curious and gentle snake and I hate to see her hurt like that, even if she can’t show her pain. It might be a last ditch attempt, but if she does need to be put down I’ll consult with the vet. @stewart_reptiles (Whoops, forgot the reply tab)

Very sad. I don’t see that animal making it. I am a very cut and dried blunt midwestern boy. They can choose to give up the animal or I’m calling animal services. I don’t need a friendship with people that would willingly subject an animal to that kind of treatment. Maybe harsh, but I gotta sleep at night.

Couldn’t have said it better. Offer to take it from them, and then if they still won’t budge - report.

Sadly this animal is past homemade remedy or care, the burn is so severe it will require Silver sulfadiazine and antibiotics which are often required in the most severe cases.

They need take the animal to a vet, or surrender it or have it euthanized.

I sent these pictures to my mom, who happens to be a vet, and she agrees. The animal needs to go in. Risking secondary infections.

If they get back to me by this evening I’m going to make an immediate appointment with the local exotic vet, but they’ve ignored my messages before. If not, guess I’m calling in services.

Omg this has my heart bleeding right now. Oh god just seeing that open flesh under her scales exposed is gut wrenching. The amount of pain that animal is in makes me sick. Shame on them for allowing this to get this bad. I wouldn’t even trust them with a rock at this point. That poor animal.

Needs to get to a vet. It’s too bad of a case to self treat. Poor thing

That snake needs to be rescued ASAP and taken to a vet. It looks like a rat chewed the hell out of it.

Not trying to change the subject or say anything bad about petco’s or PetSmart’s or etc. But seeing those pics make them look like not such a bad place to be right now. Doesn’t matter if its a burn or chewing rats. Fact is, either way, its piss poor ownership practices, and they should have it taken away from them. Just the fact they want to try to fix it at home instead of taking it to the vet, already shows they can’t even afford the proper care for it. Maybe I’m reading it wrong, cuz those pics pissed me off so much. Was really trying to keep quiet, and just let everybody else say what they want. But the more I keep looking at it, the more mad I get. So being quiet just ended.

That’s possibly the worst thermal burn I’ve ever seen. I feel that the animal’s chance of survival would have been very slim. She probably should have been euthanized rather than being allowed to slowly die, most likely in terrible pain. Personally, I would report it to the authorities, but with the animal being already dead and the body very likely thrown away, prosecution is unlikely. The pictures prove an injured snake existed, but not who owned it, that the the injury was the result of neglect, or whether or not it received veterinary care. Plus, as someone has said, it is rare for cases of neglect or cruelty towards an individual reptile to be prosecuted. And those convicted of cruelty or neglect usually receive a slap on the wrist.

Listen, I used to work in animal welfare, don’t wait to call, this animal is suffering and time is of the essence. Try to see if you can do a “good cop - bad cop” thing with the cruelty officers, the owners need not know you called or are working together and/or just the humiliation of having a cruelty investigator visit might be enough to get themto relinquish the animal.

@nocturne_reptiles any update on the snake?

The OP already said that it died without being taken to the vet.

I don’t see where the OP said the snake died yet? Did I miss something?