Hello all, I wanted to point out this project that Eastern Michigan University is doing. Basically, these people are trying to figure out the genetic basis of color morphs in ball pythons, and they need sheds from different color morphs to do it. Currently they are focusing on the different Albino genes, but they will take sheds from any morph! They have already discovered some interesting things about Albinos, Candy, Toffee, and Ultramel (you can see what they found on their website), but they currently need more sheds from Lavender Albinos to confirm something that they found. I’m not sponsored by them or anything, I just feel like this is going to be very important in the hobby and I want more people to know about it and help out!

Here is a general overview of how the process works:

The source and morph of received sheds are recorded, and sheds are then stored in the freezer to kill insects. Snake sheds are then washed and divided into equal portions, which are placed inside 1.5 mL tubes. Lysis buffer is used to perform DNA extraction. The extracted DNA is then purified, and undergoes PCR reactions. PCR reactions use restriction enzymes to fragment the DNA at specific sites. DNA fragments are then run through electrophoresis to determine their size. The PCR reactions (DNA fragments) are also sent to an outside source to analyze the DNA sequence. The DNA sequence data is then returned to us and compared to the DNA sequence of our known wild-type morphism to check for mutations.

Current progress (albino)
self.ballpythongenetics
The first color morph we decided to study was ‘albino’. We chose the albino color morph because albinism has been well studied in humans and mice, and the genes causing albinism in mammals tend to be highly similar between species. This similarity suggests that the mammalian and reptile versions of these genes function similarly at the molecular level. Mutations in the reptile versions of these genes are therefore expected to cause albinism in reptiles.
We hypothesized that albino ball pythons carry a mutation in one of the same genes causing albinism in humans or mice. To test this hypothesis, we chose seven of the genes known to cause albinism in humans or mice. We identified the ball python versions of these genes, and we sequenced the ‘coding’ regions of each gene in two animals: one normal (wildtype) ball python and one albino ball python. We focused on the coding regions of the genes because the coding regions are the parts of a gene that determine the structure and function of the protein that the gene encodes. Mutations that disrupt gene function often (but not always) reside in coding regions. What did we find? Surprisingly, we did not find any mutations in the coding regions of the genes in the albino ball python.
Our results could mean one of two things. First, our results could mean that albinism in ball pythons is not caused by a mutation in any of the seven genes we sequenced; rather, albinism might be caused by a mutation in a different gene. An alternate possibility is that albinism in ball pythons might be caused by a mutation residing in a non-coding region of one of the genes we sequenced. Such a mutation would have remained hidden to us because we did not sequence non-coding regions of the genes. We are currently performing experiments to distinguish between these possibilities. Stay tuned for updates!

This is seriously cool stuff. Wish I had some skins to donate but alas I have no Lav Albino in my collection. On the other hand the fact that they were able to (mostly) prove that Caramel and Ultramel are allelic and even further that there are multiple lines of Ultramel is awesome. It’s good that we were able to discover a gene that doesn’t have reproductive issues like Caramel does but still gets us an amazing snake when bred.

Also they are working on tests to prove (at least for these genes) het and non-het snakes. Imagine not having to wait and prove out a snake potentially waiting 1-3 years only to not have the genes you want. Imagine if this branched out to all recessive genes!

There’s actually a group out of McGill University who has found the gene for piebald, they’re currently working on validating it by using CRISPR to make a piebald ball python. They sent me a copy of the preprint and it’s pretty cool! I’ll definitely share once it’s published

Also they are working on tests to prove (at least for these genes) het and non-het snakes. Imagine not having to wait and prove out a snake potentially waiting 1-3 years only to not have the genes you want. Imagine if this branched out to all recessive genes!

That’s one of the things I’m really excited about! I have a Pastel Chocolate probable Hypo DG possible het Caramel Albino and I would love to find out if he is het for Caramel Albino without actually having to produce visuals!

This is really interesting. Love when it gets really scientifically involved.

This is why I love ball python genetics! It’s so much more complex than other animal genetics. I have been driving my boyfriend crazy with explaining dominant, co-dominant and recessive genes and combination genes. And I’m not an expert, I just think it’s amazing!

Can i ask has anyone ever looked at genetically identifying what the difference between morphs actually are, im from a science background and im wondering has anyone ever tried. we identify alot of things based on genetic markers, we can do this process alot quicker and easier than ever before in terms of the technology we have now. We can test for human disease based on genetic markers, im thinking it would take all the guess work out of identification of what the morph is and if you have something new. Im wondering if there is any genetic material in a snake shed that could be used as they are easy to get from a snake without live tissue or blood etc…

Im guessing snake breeders would use a service like this, depending on cost etc…

Just a thought ive been toying with

Are all the mutations in balls on the same gene??? That would make it even easier, it wouldnt take long to build a library theres not that many morphs, if you look at all the different types on sale. Would breeders pay to know for sure what genes they have in a new snake.

This diagram is useful to determine that. I think they can occur anywhere on any of the chromosomes but I’m not positive on that.

There are several groups currently working on it right now, I know there’s a lab at McGill University who has identified the causative gene for piebald, and there’s a group out of Eastern Michigan University who are working on albino, lav. albino, and ultramel.

It’s still not an easy project because it involves sequencing mutliple ball pythons of each morph (which will cost about $1k), and comparing the genome with a wild type reference (which is not currently publicly available and annotated). There isn’t a huge amount of funding available for ball python genetics (unlike cancer or alzheimer’s) and there’s a limited number of people who are geneticists and also interested in ball pythons.

Are all the mutations in balls on the same gene???

Also, no, definitely not. Coral glow/banana glow is sex linked, so it’s on the sex chromosomes, but the rest could be anywhere.

Oh yes it definitely would, we’re talking 150+ traits, and some are allelic so even once you identify the causative locus, the nature of the varient would need to be determined (deletion, SNP, copy number variant, etc)

We’ve discussed why this is so challenging in some other threads, I can’t track them all down but here’s one Spider BP Research

Cheers for the response, im used to working with human illness that has deeper pockets i guess, i may have to do some digging, is most of research you know of usa based?? Just got me thinking earlier, i watch and read so many articles where people are unsure what is at play in the ball, would this be the simplest way of a definite answer.

Can i ask you said about doing multiple animals of same morph, do you mean same morph or morph family like bel etc, i would of thought that if the morph link was genetic like human eye colour, they would all have same mutation at same place. Base mutation or sequence etc… Sounds like a fascinating project. Maybe if i win the lottery.

you said about doing multiple animals of same morph, do you mean same morph or morph family like bel etc, i would of thought that if the morph link was genetic like human eye colour, they would all have same mutation at same place

A every representative of a given morph should have the same mutation at a given locus (with some notable exceptions, like Albino), yes. But, to be able to confidently call the specific mutation requires a statistically significant number of individuals that carry the mutation being interrogated to ensure that the change at the genomic level that is found is consistent. Given the number of “silent” mutations that occur across a genome, if you only looked at a single representative of any given morph, odds are you would not be able to call which of the many small changes you found was the absolute source for the mutant phenotype

Is this the paper you were referencing?

A nonsense mutation in TFEC is the likely cause of the recessive piebald... 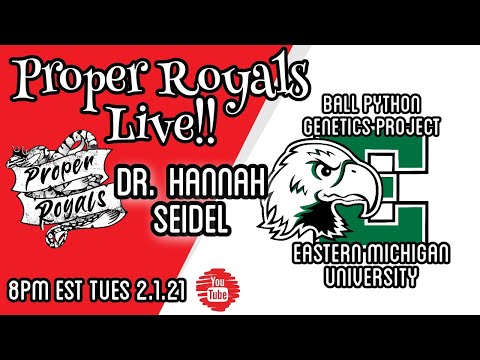 That is seriously cool and makes you wonder where the future of the pet market might be. If they can create a piebald BP using CRISPR, then I’d imagine eventually they’ll be able to use this technique to create designer snakes when more research is concluded on other genes. Imagine creating a pompeii in the lab. The question is, will they get the funding for such an undertaking? Then there’s also the ethical considerations when humans start playing God.