Can you help me with the morph of this gecko?

Hi, I have had this leopard gecko for years, could you help me with the morph?
I want to start breeding geckos leopardo! and I would like to know what stage it is so I can look for mates and a couple of males for it. 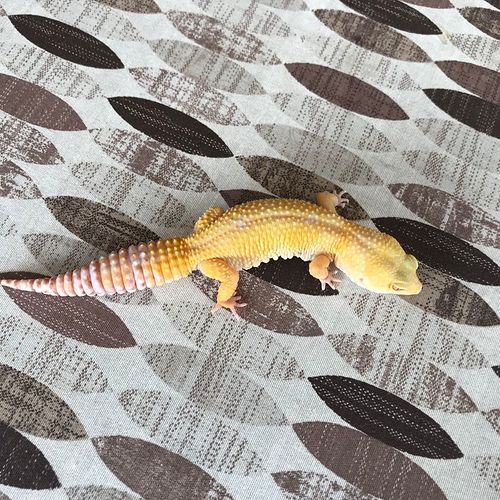 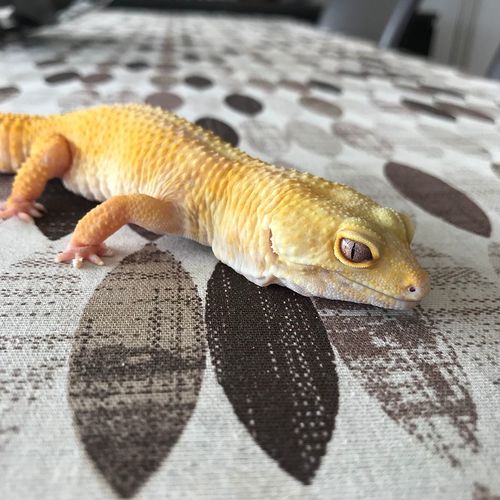 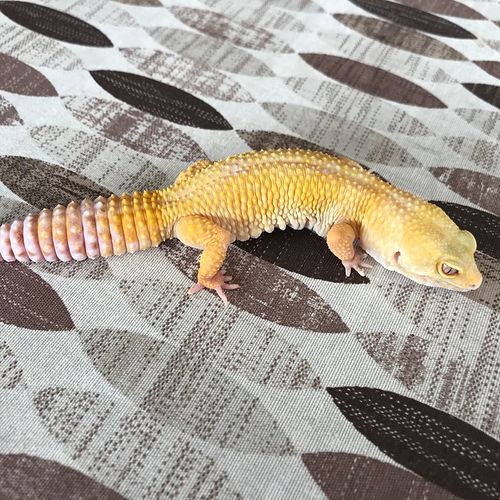 Super hypo tangerine carrot-tail baldy. Looking at the eye, it appears it may be a Rainwater albino as well. Only way to know would be through test breeding or if you know who the breeder was and they knew what the parents carry genetics wise.

There are 3 strains of albino (Bell, Rainwater, & Tremper), each incompatible with the other and each is expressed through recessive inheritance. But, as I said, that looks like a Rainwater albino eye. I worked exclusively with that strain from 2000 to 2018.

Tangerine and carrot-tail behave in a polygenic manner, with intensity being a result of selective breeding. Carrot-tail is generally linked to the hypo mutation. A gentleman named Ray Hine, of the UK, originated the hypo and carrot-tail traits which is why they are usually seen expressed with one another. The original Hine-line hypos were yellow-tan in base color, or the normal background coloration of a wild-type leopard gecko but missing its back spots. Coloration improved when US breeders started to cross selectively-bred tangerines with Hine-line hypos in the late 1990s and early 2000s.

Pure Rainwater albino eyes. 1st and 3rd photo are of my former male, CB 2000 and was 2nd generation from “Max” Tim Rainwater’s original albino. 2nd and 4th photos are of a 2002 Rainwater albino female from Kelli Hammack of H.I.S.S. 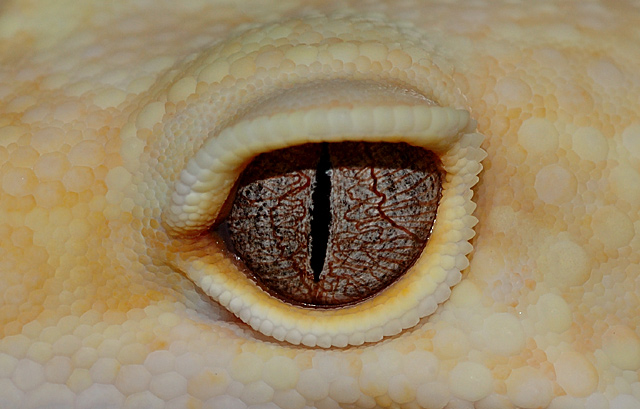 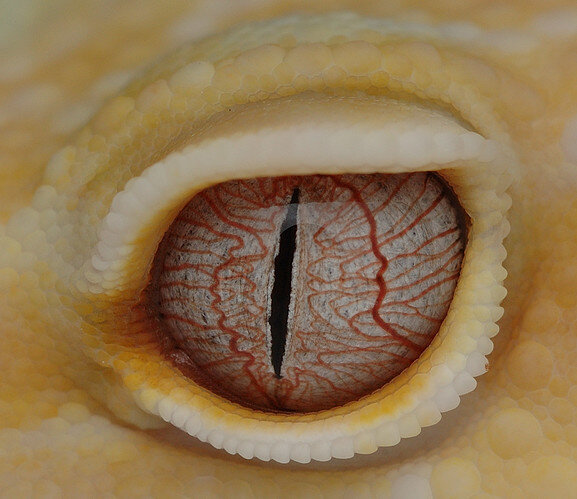 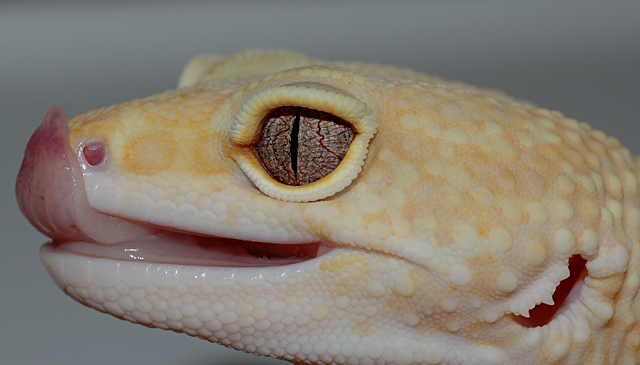 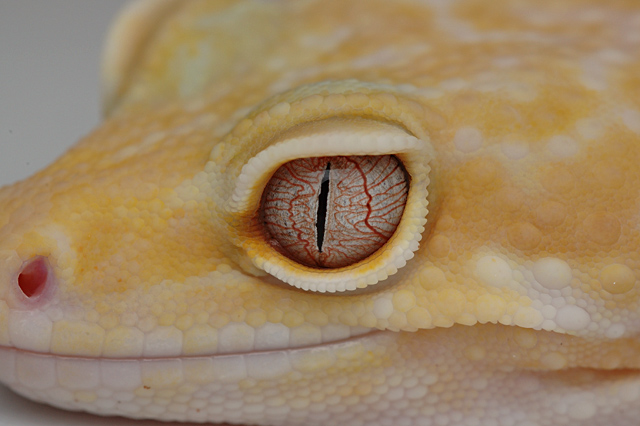 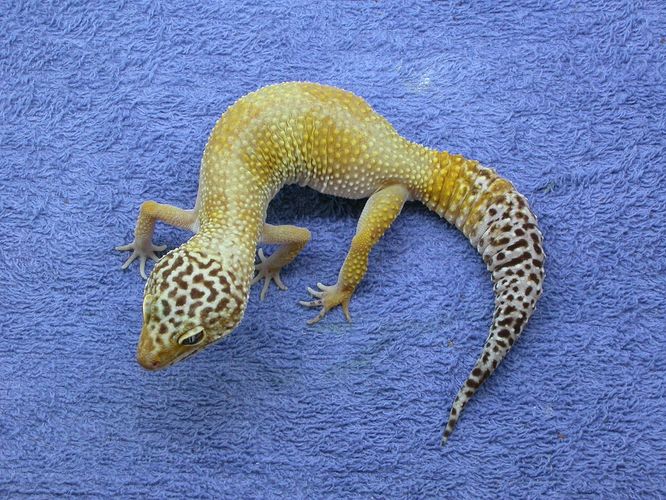 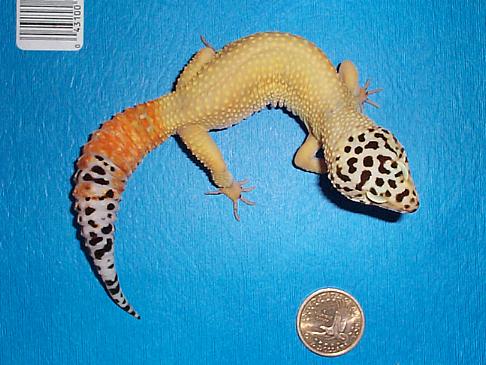 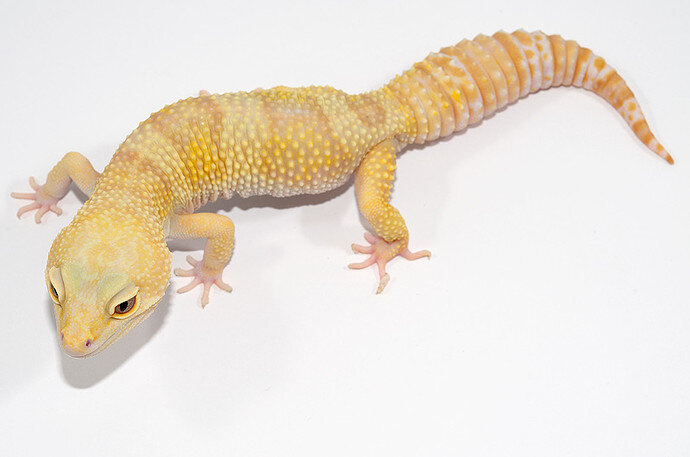 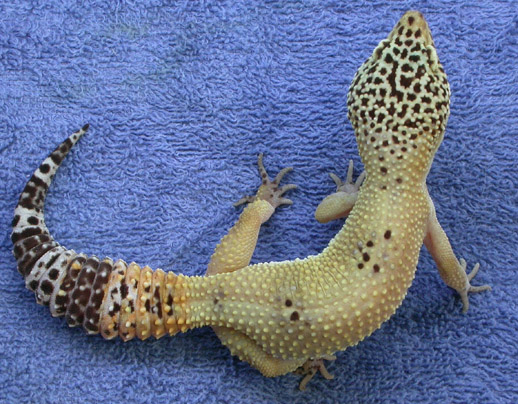 Wow! thank you very much for the answer

I hope to learn a lot on this website and to be able to have as nice crias as the ones I see here.

I really like tangerines, tornado, emerine, boold and green & tangerine, do you think they are compatible with each other?

I am a HUGE fan of stripe and jungle leos. Their inheritance is weird in that it seems polygenic, yet at least with the line I worked with they behaved in a recessive manner.

I got out of leos years ago, but still have the first one I hatched in 1997. That said, from what I recall, many of what you list are variants of tangerine. Basically lines breeders had worked on refining that, at times, are distinct enough looking from one another.

What a beautiful baby!

I agree that the albino strains cannot be reliably distinguished from each other visually, and that test breeding is required for certainty. I think it would be unethical to market offspring of your gecko as having any particular genetic trait until the mentioned test breedings have been performed. You have no idea what this animal could be heterozygous for. For many reasons, in my opinion, pet quality animals (animals with unknown genetics) should only be bred if you will be keeping 100% of the offspring.

Also, you mention getting “males” for your gecko- are you 100% your gecko is female? I ask because it has the secondary sex characteristics of a male. A view of the underside of the base of the tail would help us in that regard.

I also agree about the super hypo carrottail baldy morph.

I really like tangerines, tornado, emerine, boold and green & tangerine, do you think they are compatible with each other?

I think that it would help a lot if you were able to do some research on what each morph you listed looks like, and how they are produced. CLICK HERE to go to a page that is a good starting place to learn.

but still have the first one I hatched in 1997

I got his dad in Oct 1996, but he unfortunately passed last year. I went from 40 breeders and roughly 300 babies a season to “junior” and a 2004 SHTCTB male as my only leos now. It was fun, but I was juggling my bio degree and work.

I miss some of the old Leo community friends I had like Kelli Hammack (H.I.S.S.) and Marcia McGuiness (Golden Gate Geckos). Steve Sykes and I were the “evil duo” that used loose substrate (play sand).

I had hoped to take my collection to the level he ultimately did after I finished college, but life took me other directions. I’m slowly ramping back up and now blame Don Soderberg for rekindling another species passion in me in corn snakes back in 2011. Much of my time is tied up in them, mass spectrometers, my wife, and a goofy little 2.5 year old that loves helping daddy feed the few geckos he keeps these days.

If I breed this specimen don’t worry I won’t trade with it, my intention is to learn and buy some geckos to breed and be able to trade them.

At the moment I am a beginner with a lot of desire to learn and I would not like to sell geckos without a clear genetics.

I appreciate all your comments!

I attach a picture of the female, if I’m wrong please let me know

And finally thank you very much for the genetics guide! 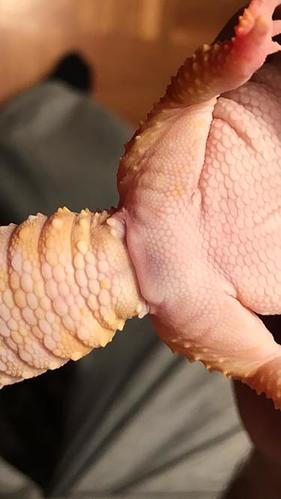 In my opinion that looks like a female. It seems like you have everything planned out and awesome gecko that you have. Good luck in your future gecko keeping/breeding.

Agreed, definitely female. I should know better than to make assumptions!

(I am a very beefy female myself.)