I was going to wait until they are all out to post pictures, but can no longer contain my excitement

Almost exactly nine years since I brought home my first ball python, I finally have a clutch of my own! 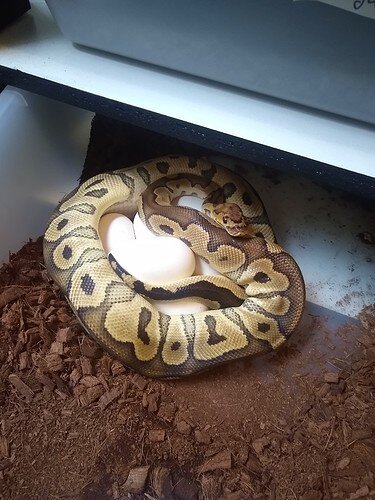 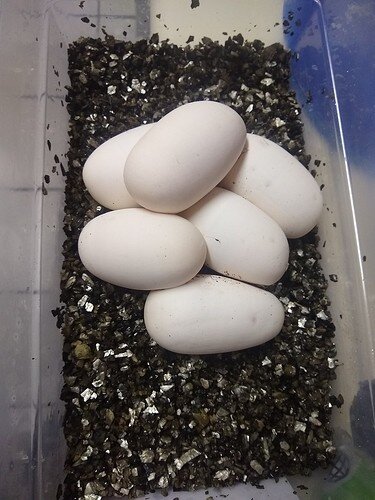 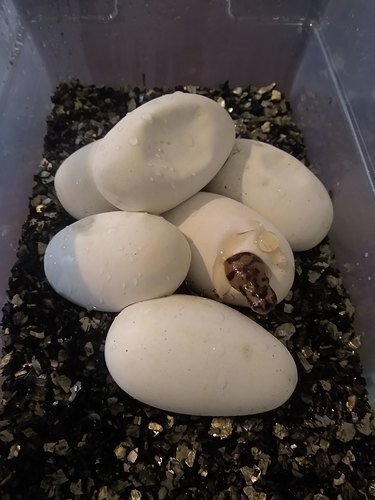 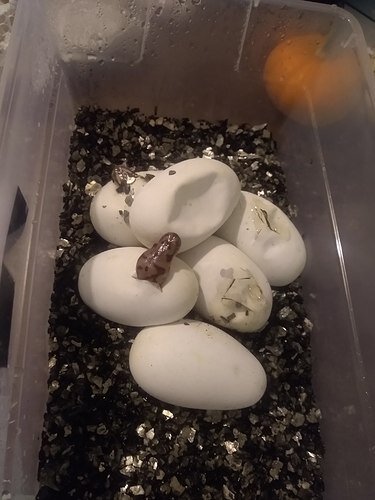 Pairing was clown x leopard butter het clown and due to incubating at a lower temp (87) it took 68 days for them to start to hatch, but here we are. Finally

Based on headstamps it looks like I have a leopard clown, butter het clown and leopard butter clown so far (can’t see the 4th one yet)

This is very nice

Hopefully a female, so you can holdback, right?

Those head stamps are amazing.
Cannot wait to see them out

This is so cool! I can’t wait for more pictures once they’re all out.

Come on little ones! 🥲 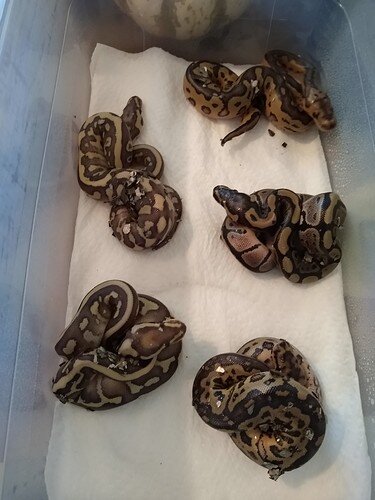 So 5 out of the six made are out and doing great, but unfortunately the butter clown never made it out of the egg. So while I’m happy to see these little cuties, definitely heavyhearted to have lost one (especially that one)

So final judgement looks like two butter leopards (het for clown), a clown, a leopard clown and a normal. Apparently I’m pretty bad at guessing what they are from just the head

Thanks, it’s my favorite and exactly what I wanted from this clutch. I’m really trying to resist naming any of them until they’re eating and stable

Are you waiting to sex them also then?

Assuming you want that one to be a female?..

Congratulations on your first clutch, they are amazing! I cannot wait to see pictures once they have shed

I know what you mean about not making till they are eating well. We lost 2 out of 1 clutch sure to not eating, it’s heartbreaking, but not as much of I had named them.

Are you planning to keep any in particular, other than the leopard clown?

And do you think your hooked enough to breed again?

I love clowns so much…maybe one day lol

Congrats on your first clutch! They look great, can’t wait to see them post shed.

Now you get the fun part of learning to sex if you haven’t already!

I’m curious, the 5th one that didn’t make it, was it fully formed?

I find the advice prevalent in these forums to avoid cutting questionable given many of the big high volume breeders believe cutting is beneficial. I’ve seen numerous examples of animals in which the eggs weren’t cut that perished but never ones that were cut too early and lost as a result. There’s no way to know for sure in your case, maybe it wouldn’t have made it regardless, but I wonder nevertheless.

Thanks so much guys! I

Are you waiting to sex them also then?

Assuming you want that one to be a female?..

Definitely waiting, they’re so small and perfect that I’m scared to even touch them. Although I did weigh a few and they’re all arond 63/64g. I wouldn’t mind if the leopard clown is a male either, because I do have a female blade het clown and a spotnose female that both will be looking for a partner in the future…

Are you planning to keep any in particular, other than the leopard clown?

And do you think your hooked enough to breed again?

If the single gene clown is a female, then she will stay as well! The normal is already reserved for a freind who has been wanting a ball python as a pet for her and her husband, so provided all goes well, I will be giving that one to them!

Since you mentioned breeding again… 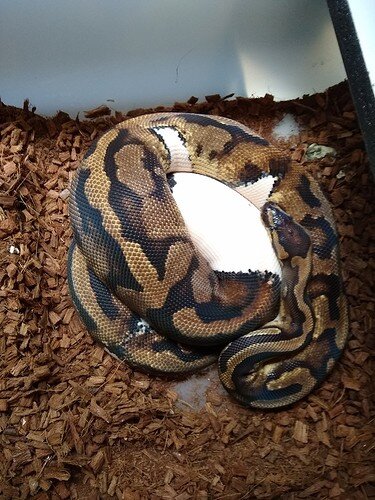 This chunk has been locking up with my banana double het pied/VPI axanthic since early june, and just refused food for the first time

I’m not a huge fan of pied, so much less enthused for this possible clutch, but it would still be cool.

the 5th one that didn’t make it, was it fully formed?

It was, and unfortunately I think I kow what happened. Yesterday morning when I checked there was a slit in the egg, so it had just started to pip, however when I came home from work there was no further progress and it was clearly dead. At that point I ended up opening up the egg and it was fully formed, but really wedged in there with the head underneath it’s body (yolk sac not absorbed). I’m thinking that when I opened the tub to check, I somehow startled it and it turned/inverted and got stuck or tangled that way. Which means that had I cut that egg the night before or not checked on them in the morning it probably would have survived. So the guilt is kind of eating me alive.

I wouldn’t let it get to you too much, we had 3 (2 separate clutches) that did not absorb the yolk properly that we helped, 2 of which died not long after. It made me super sad but it just wasn’t meant to be, despite our efforts

the one still living, it’s a proper survivor, it wouldn’t give up.

My point being is that i believe… If they were meant to survive, they will.

To add on to the above, not all of them are meant to survive. It’s not apples to apples but in the tarantula hobby it’s common knowledge that some of them just won’t survive to mature. Snakse have higher chances of surviving but the point is that it wasn’t your fault and you couldn’t have done anything about it.

Congrats on your first clutch and such great odds! The babies are beautiful!

Thank you so much!!

The substrate is vermiculite, I don’t actuallly have a great reason for choosing it over perlite or any other hatching substrate, but it worked really well at maintaining humidity and I would probably choose it again.

I chose to incubate at lower temperatures because I had read several anacotal experiences of people on ballpythons.net who found that lower incubation temps lead to bigger, more robust hatchlings that ate better/had less issues. Obviously I have nothing to compare to, but I thought if it was true, it might be worth the trade off of longer incubation time.

Now faced with the possibility of another clutch being laid in the next few months, I have the opportunity to re-evaluate which things I thought worked and what I’d do differently, so if anyone has any recommendations I am always open for critique.