My fiancé went and exchanged the female crested for me (I had posted about her since she had a spinal deformity and wanted second opinions… turns out she was “born like that” but it still wasn’t disclosed to me as so.)
So now I have a healthier looking male, and since I’m really new to crested gecko genetics I’d like some assistance in identifying him. 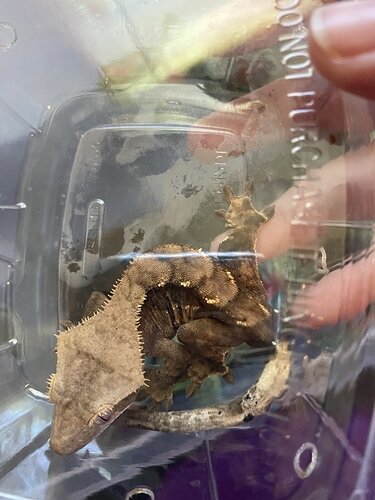 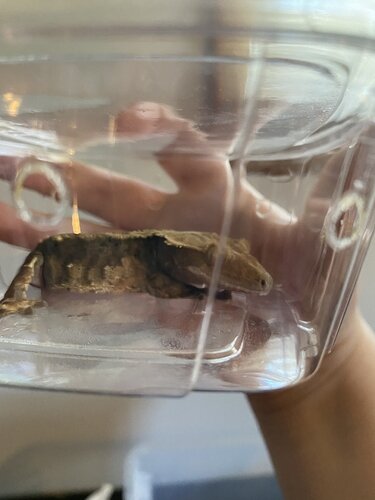 If I need better pictures I can get some later, he’s a bit jumpy and I would rather give him time to settle in than pester him trying to get pictures. 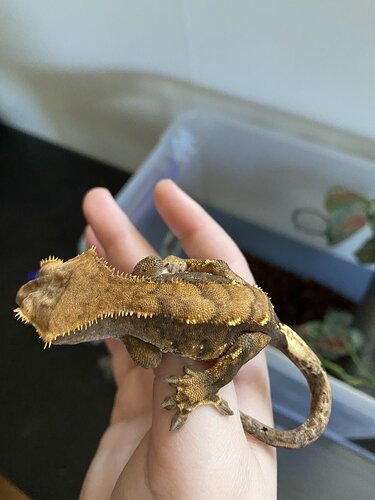 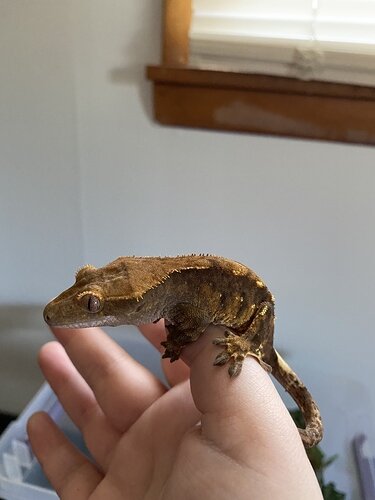 Got some better pics 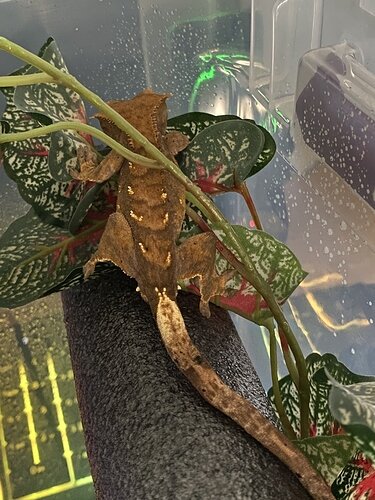 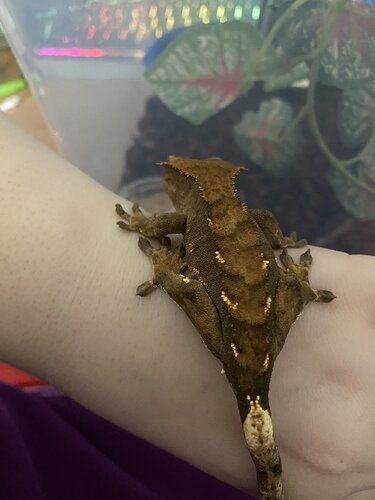 Even more pics! Brought him inside the main part of the house since our reptile room is a little colder than I would like for him. Probably need to turn up the thermostat haha

After some research on the morphs, I think he would be what’s considered a flame.
Would really like some feedback since I’m interested in breeding these guys and would like to pick out a pretty female for him for once he’s up to size

Still looking for some clarification on this little guy’s morph. Any help would be appreciated!

Yes, he is a flame. You could say he has dashed pinstripes as a trait. Sorry that you had a bad experience with your original gal; the new guy looks nice and robust though!

I’d actually say that one is a Harlequin. There is enough pattern in the mid zones to qualify.

I was stuck between identifying him as a flame or a harlequin because of his side patterning, and I did notice the dashed pin striping when doing my research on the morphs.

I’m not sure there are enough spots to class as a dalmation?

I would agree it’s hard to say harlequin or flame (I have a Crestie that is similar with its markings) but there appears to be enough coverage on the feet & legs to count as a harlequin.

Do you have any up to do pics of your Crestie?

Not a Dalmatian. ‘Dal spots’

If not a lot of spots that’s what people say. I have a couple here with ‘Dal spots’ as only a few.
If you don’t want spots though be careful what you buy, ya can’t get rid of them!

And flames don’t have any side patterning
/very minimal and dorsal is a different colour (usually cream).
So many people these days selling harleys as flames too!

Everywhere I’ve read, including books say flame have pattern along the side but not on the legs and feet! So that’s new to me.

Yeah not gonna lie flames a funny one! I personally don’t think I’ll ever get into them. Too many people lieing about morphs that people believe them and then sell babies on the same etc. So I’ve stayed away. I had an olive flamed but he went begging of the year. Was a big chunk with floppy crests, was a looker, but wasn’t going to breed him so he’s gone to a family home in a big ol viv!
But usually cream dorsal and none or very min pattern on side.

Boy above had patterning on sides and feed also so he’s def a Harley!

Haha no worries I do that a lot

I’m nutritious for reading, wording & speaking all wrong… it’s in my nature

I’ve got a male here, was sold to me as a harlequin (purchased as a baby), I think he is a flame. I bought him for the portholes but I’m not sure what I’m going to do with him yet as no females lined up

Thanks for the info

Happy to help!
I really enjoy it I must say! I usually get people message me on adds of cresties up just to ask for morph help now

haha I don’t mind though it’s all part of the fun!

I unfortunately sold this guy awhile ago because I had gotten a nicer male to replace him!

I had gotten other cresties as well, but sold them as well because I was finding taking care of them more of a chore than something I actually enjoyed, and it got to the point where I felt like I was slacking on their upkeep. I wanted them to go to a home where they’d properly be cared for.

Once it becomes no longer enjoyable, that’s when it’s a ‘chore’ and I completely understand that! My other half got like that with tanks, we’ve had and not had them over the years, set up another Marine few months back and now selling it all again as just too much with work etc and doesn’t enjoy it now. Working with fish doesn’t help either I think as it’s a bit too much!
We also got like that with the Royals, only have my first ever one (Banana) now. We had 12, but Didn’t want to part with him and it’s only one so he’s an easy boy. Would love a female banana down the line but no rush!
Touch wood cresties are still enjoyment to us all here and the fattys. Really hope to never feel like it’s a chore with them!