Replacing the bp/reptile picture on that category with the picture of the winner for that month. Really just redoing all the pics to freshen it up but it would be cool to see the winners get some glory.

Do you mean that category on the marketplace?

Yeah. On the market place

I like the idea, but with just one little adjustment, and this is just my pickiness coming into play.

Rather than have them replace one of them images, it would be nice to see the winners pictures around here

The only reason I say this is because it already sort of bugs me that “Lesser” has a picture of a BluEL rather than a single gene Lesser.
I think them pictures should show you the individual gene, not combos. That’s just me though.

It would definitely be nice for the winners to see their pictures on the Marketplace though.

But @eaglereptiles do you think that heterozygous genes like for albino, for instance should only have their picture by het albinos?
I think it actually would be kind of cool if we had a het example and a visual example represented in the photo. Plus this could be done for dominant genes too.

I also think the pictures on the homepage would be cool, it should also tempt more people to compete in the “OTM” contests because at the beginning you had to cut the number of submissions in half to meet the limit of how many go to the voting and now the submissions weren’t even close to the limit.

do you think that heterozygous genes like for albino, for instance should only have their picture by het albinos?

That’s a good point, this is how I personally would go about that…

these to each one.

And as for the contest winners pictures… 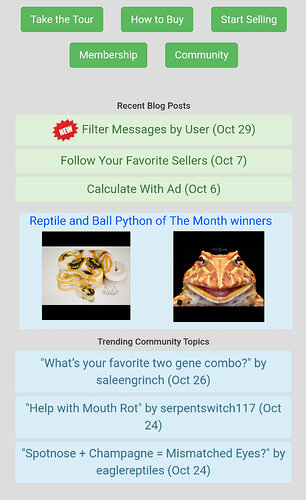 Forgive the poor design, it was threw together quickly

Has anybody put any more thought into doing this? I think it would be a quick thing that would be very cool and beneficial.

I think featuring these on the market site somewhere is a good idea.

I assume you’re asking where this falls in MorphMarket’s feature request priority?