Indigo graced us with 20 good eggs and 1 slug yesterday. I’d originally paired her hoping for a clutch in November or December but she wasn’t interested in that apparently. Dam is a T- Albino and the sire is a normal het T- Albino. 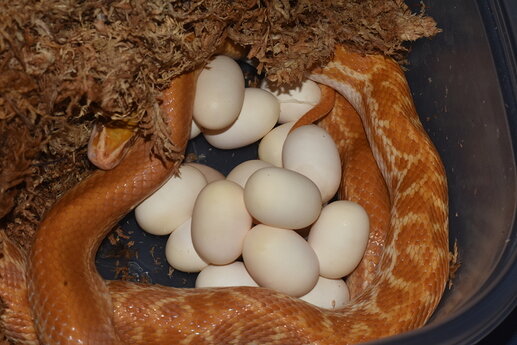 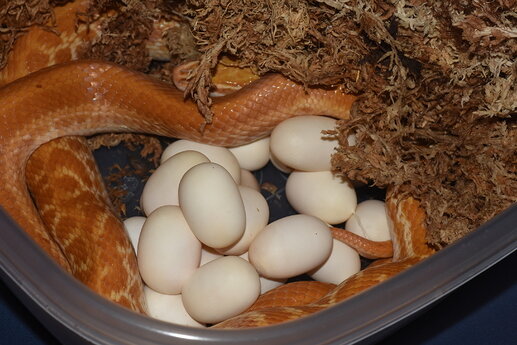 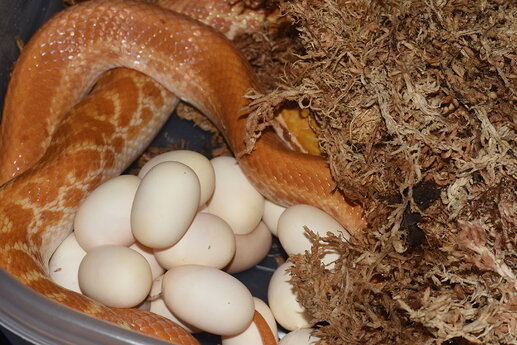 Pic of the sire, Ukiah. 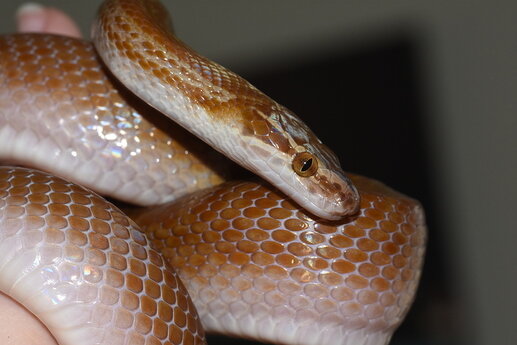 Even though they are a smaller type of snake would you say that they make a good first time breeding snake?

No, I wouldn’t recommend them for a beginner. They breed very easily, there is no real work needed to get them to breed and they will breed all year long but they can and generally will double and triple clutch even after one pairing. You’ll end up with quite a few. The eggs are finicky and need a lot of fresh air but are also very sensitive to humidity, both too low and too high. No one mentions this either but babies suck to get eating.
I bought this pair to have an easy species to add to my breeding groups, since everything I’d read said they were super easy.

About 40% of babies just plain refuse to eat for the first 2 to 4 months, no matter what tricks one tries, my first two clutches I exhausted every type of feeding trick I’d ever heard of and had a large percent die. It wasn’t until I was moaning about my bad luck, wondering what I was doing wrong on a couple forums that several breeders private messaged me to tell me that is totally normal. Once I knew that, I started force feeding mouse tails after the first two refusals (I offer F/T first, then live. A lot of them want to start on live, that is the single best trick I’ve found with them) and once I did that, my mortality rate went way down. The FF ones hit somewhere in the 2 to 4 month period and something just clicks in their heads and they eat fine after that but they need the tails to maintain enough energy and muscle tone to make it to that point. I’ll continue to offer the FF ones food in various ways and then force a tail after refusals until they finally eat on their own

If I’d known that, I’d never have bought a breeding pair. They are the funnest hatchlings to handle, I love their personalities, if not their eating habits, and I’ve become very proficient at force feeding them. But they have been the most stressful species I’ve bred to date. I do consider them to probably be great preparation for Western and Tricolor hogs, which were in my future plans and the ones I thought would be the hard ones.

6 posts were split to a new topic: Species recommendation

Really depends. If you like colubrids, I’d suggest most North American ratsnakes. They are generally fairly easy all around and most species usually eat readily, even on F/T.
If you want a boid, Rosy or Kenyan Sand boas are fairly easy and don’t produce a ton that can overwhelm you. They are a bit more difficult to get eating but live is usually enough to get them going. Also don’t take up much room. I personally prefer Rosy boas.

I’ve never bred them but I think Red Tail boas are reasonably easy as well.