Let me preface this by saying, while I was not in the market for a BP, nor did I really want one, I just couldn’t force myself to walk away from this snake. I’ve done a lot of rescue over the years with various organizations and currently work at a vet clinic. However I’ve never gotten in a snake this thin before. I can feel every single rib, vertebrae and bone this little guy has. He is supposedly a “normal 2.5 y/o male BP”. Supposedly this dudes kid got bored after a few weeks of owning the snake nearly 2 years ago. The parents “tossed it a live one every other week”. Clearly we can see how unlikely that is.

The photos in the tank are what the parent met me with him in it. No hides. No heat. Small metal water dish that didn’t look to have had water in a very long time, and tons of shed skin. He has stuck shed from snoot to root and looks to be several stuck eye caps. Currently I’ve got him in a clean glass exo terra with some plastic wrap on the screen to help with humidity. Some papertowels for bedding and a make shift hide that’s really a rat hide away castle but it works for the night. Also under tank heating on a thermostat and misted down really well.

I soaked him for about 15 minutes. He was fine at first but then started spinning so back into the terrarium he went. Tons of shed had already come off from that small soak. I’ll do it again tomorrow.

Any recommendations??? I offered him after 8 hours in his new home (I normally would just leave him alone to decompress, but he’s so skinny I’m worried) a rat pup (thawed) and he struck, left it and when I came back an hour later it was gone. I figured a much too small meal for his size was better than nothing for the night, plus just needing to start smaller meals until he’s got some meat on his bones. 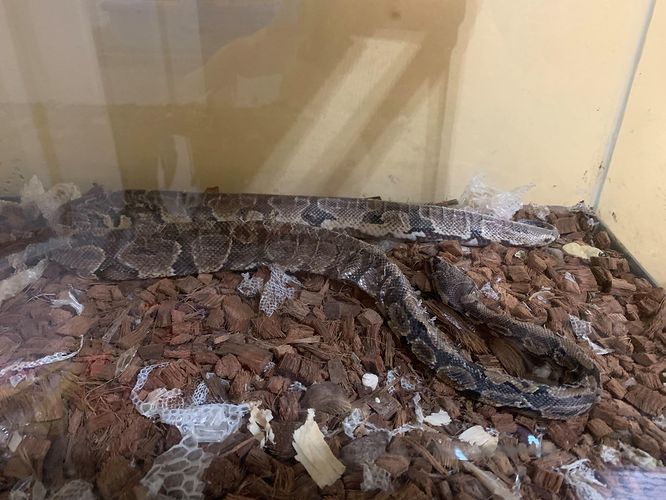 I think he needs to see a vet, given the history. If you don’t already have a herp vet, you can find one here:

I second that he needs to see a herp vet. It’s a good sign that he ate for you, but a vet can give him fluids to help rehydrate him, and they can check to see if he has any infections and treat them before they have a chance to really harm the poor fellow. I’m glad that you stepped up and took the poor guy in, I can’t understand how anyone could do that to an animal and be able to sleep at night.

Oh I agree totally about the vet visit. I guess I meant to put in the mean time. Our exotics vet doesn’t have anything until the middle of this upcoming week. I’m lucky to have access to a really well known exotics vet in my area. If nothing else I will drive the 2 hours into the nearest large city to find one if he can’t help or see him fast enough.

I do have one, but thank you for the links. I have a few of them saved already but always thirsting for more info always. Thank you again.

Other than feeding him and taking him to the vet, soaking him in lukewarm water every couple days (or even everyday if he doesn’t seem stressed) would help with hydration and getting the stuck shed off.

Okay great. Thanks! I’m glad to know I’m on the right track then. I appreciate the feedback.

Pardon my French, but holy sh*t he looks awful. How could the people who owned him look in the tank and think to themselves “yep, looks like a healthy snake”??? So glad you took him in from those people.

All I can offer is make sure he’s passing his bowel movements. For all we know he could be horribly impacted on top of who knows what else.

I just weighed him and he came in at a whopping 362 grams.

Since the bath seemed to stress him out you might try a humidity box, put some damp dish towels around him in a tupperware with some air holes and pop the whole thing in the tank, if it will fit, to keep it warm. It can be even better than a soak for getting stuck shed off because he can rub against the towels and ball pythons tend to find it less stressful than being in water. Given how dehydrated and how much stuck shed there is I’d do at least a half hour daily till he’s got it all off.
To help keep the humidity up in the tank you can get some sphagnum moss and stuff it in old nylons or the cartons that berried some in. You can also tuck one of the ‘mossages’ into the hides if you’re struggling to keep the ambient humidity high enough.

I actually already did the humidity box and it worked great. A couple soaks in and with a small section on his head that is multiple layers of stuck shed, it’s all come off. He’s already looking brighter and more alert. I’ve got him in a tub enclosure with bare bones for quarantine temporarily. So just a hide, water dish and papertowel substrate. He’s soaked himself in his new big dish already. I struggle in my home with humidity with glass, but thankfully the tub is doing the trick. 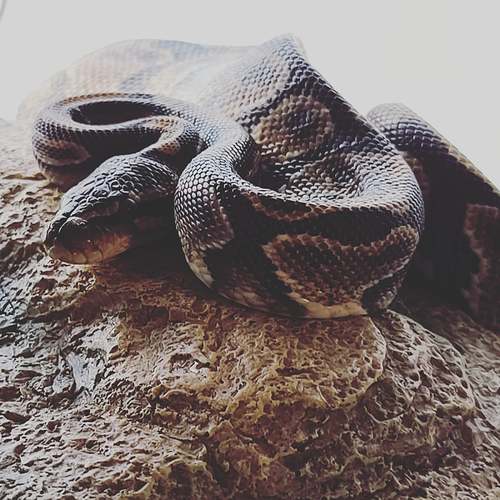 Snake Gyllenhaal here already looks better. All that stuck shed is off and he took on a small meal successfully again. I cant wait to see this baby heal and strengthen.

I don’t understand how such irresponsible people can exist to allow it. Luck, that he would find you. He looks so much better, great job. I hope that he would be 100% healthy soon.

Thanks everyone! He’s a little sassy right now. Which is perfectly fine because at least he feels well enough now to be sassy. Lol.

Good on you Leag,

Unfortunately the reason something like this happens, IMO is that parents get things like this for their kids and the parents themselves have zero interest.

As a parent myself, don’t buy any pets for your children if you aren’t willing to put the work in yourself when they lose interest. We’ve gotten dogs, fish, birds and reptiles for our kids. Every single time the excitement wears off within weeks and my wife and I are taking care of them solely. Which is fine for me, because I actually wanted these things for myself in the first place.

Oh I completely agree. Same story with dogs, cats, small mammals, etc. Its so irresponsible on parents parts when they do it knowing they aren’t going to step up if and when the child looses interest.