Finally, my first crested gecko hatchling. I found the egg on 4/4 and it just hatched this morning. It wasn’t the first egg since I accidently submerged other eggs in water. If anyone has any unisex name ideas I’d love to hear them. The pairing was a harlequin dalmation partial pinstripe to an extreme harlequin pinstripe. I added a picture of the baby, sire, and dam. 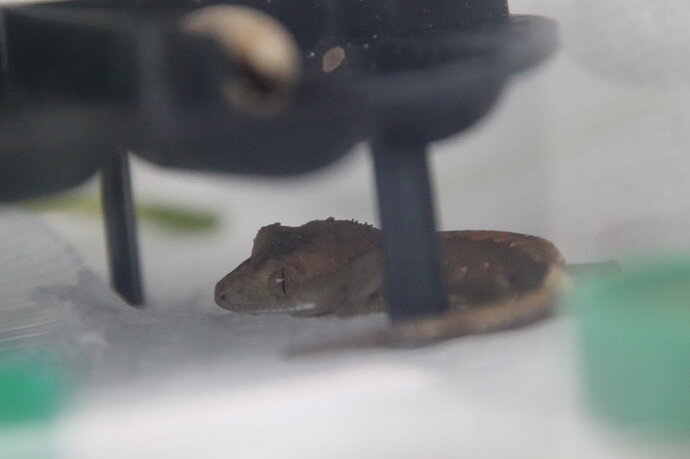 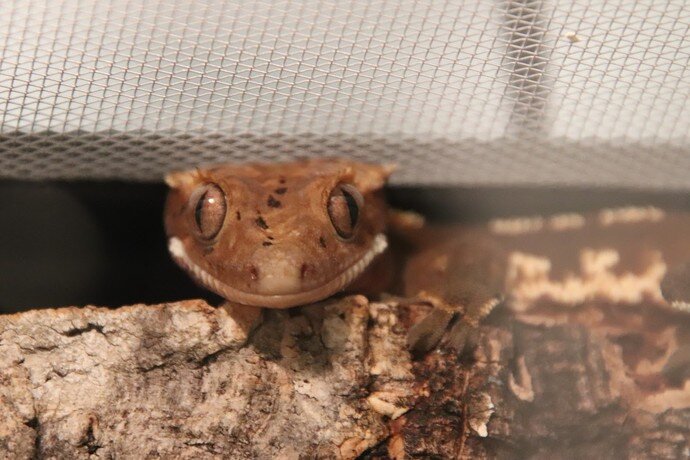 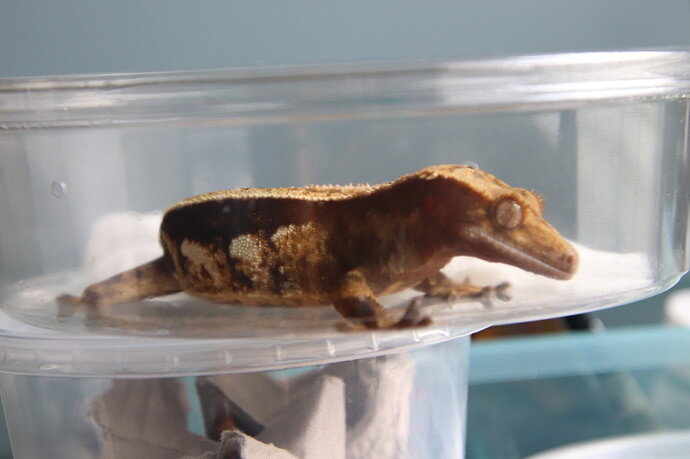 Well congratulations!!! That’s super awesome! Looks like he/she is smiling at me lol

So cute and tiny, I can’t wait to get my own hatchling Cresties.

Considering you found the egg, I’d suggest the name Lucky

Thank you both! It looks like cresties are always smiling.

Lucky’s a great name idea, I love it.

I can’t wait to see how much it grows, I think this one will be a keeper. Unfortunately it inherited the flighty genes from the parents because when I went to pick it up to make sure it was doing okay it jumped onto the side and tried to escape.

Just when I hope to get a handleable crestie…

That could change! Lil Cresties are always more jumpy then adult Cresties so it’s got plenty of time to improve

Would love to see more pics as it grows

Yay! Was waiting for this!
Anymore pics of everyone? Don’t think we’ve seen your cresties before!

All babies are flighty, well not all, but you will rarely get one not! Lots of handling to tame down!

I’ve been trying to tame Lucky (it’s final) down. Last night I sat in front of its enclosure reading a book for an hour (hopefully it doesn’t see me as a threat). And this morning I added a half toilet paper roll in the enclosure as a hide (since I had the egg incubation tray in there, I found it easier to move than trying to wrangle a 1 cm long crestie

). This is my 4th crestie (since I’m keeping it) so I don’t have a ton of pictures. I’ll add a few more of everyone. In order are the baby, sire, likely dam, and unlikely dam.

Do you do anything special when handling the babies? Or do you just pick them up and try to have your hand where they want to jump so they stay in your hands? I’ll try to do it next to a tall plant in the bathroom where they can’t hide or escape.

Some more pics would be awesome

I sit on the floor and let the baby cresties decide whether they would rather climb, walk, jump or all three. I have a house plant near by as I find they tend to jump towards it for security… But at least I know that’s where they are likely to be heading.

I haven’t bred my own Cresties so I can’t really comment on day old Cresties but I’ve had a lot of them at young ages, such as 3 grams as I love to see them grow.

Regular handling is great, but make sure they aren’t too stressed.

Unnamed is pretty!
Is She mum? If so She’s a tricolour pinstripe, and a pretty one at that. Tricolours are my fav morph

And dad is pin dash not partial pin which would explain luckys markings on his/her dorsal!
Can’t wait for more from you! Tri Dalmatians on the horizon!!

Nothing special to handle, I just get them out every other day from when born until around a month old then I say hello daily. Just let them walk over my hands

My daughter also gets in on the handling!

I’m pretty sure she is because the baby shows very faint tricolor (not enough to classify as that) but doesn’t show the pinstripe. I figured if Monkey was the parent then Lucky would have more red colors. What would you say Lucky’s morph is? I was thinking a low-expression harlequin porthole but it doesn’t seem to show enough harlequin to even classify as that, unless that will change with age? When handling do you just pick them up from the sides or do you lift them up from their belly?

Yeah she’s a tri pin. She’s a stunner too! My cuppa

I’d say lucky is a Harlequin with Dalmation spots, wait til first shed. But usually patterning spreads as gets older!
Doesn’t matter about the red, a lot don’t show til older and some won’t even be red from them.
But consider not a lot of spots I’d say Unamed is mum.
As if was monkey i would say the baby would come out with more spots from experience with my lot! Also with monkey being a Harlequin dalmation, so similar to Rex I think you’d know, they should be very spotty babies!

I put my hand in front and boop the bum! Haha. Or just scoop up.

I’d wait till first shed before ID is made. Usually patterning spreads with age, but not guaranteed. I’ve seen Cresties change so much while others, not so much. A lot could still change with colour and patterning.

Could be either monkey or unnamed as parent.
Often spots are minimal till they get older. Plus it depends on the parent lineage as to what the offspring can turn out like.

Why haven’t you named Unnamed yet? She is very pretty.

I usually bop the bottom half and they jump into my other hand. I find the young ones run more when I scoop them up.

About how long after hatch is first shed? I thought it was only a few hours but it’s been about 30 hours since Lucky hatched. As for why I haven’t named unnamed is because I haven’t thought of a good name yet. She’s very shy and reclusive so it’s hard to go off of her personality. I also have a couple leopard geckos that I got from the same person that I haven’t named yet (Both have black spots and one has a dark base color while the other has a lighter base color, I might do Inky and Blinky or Pinky for them).

They can change. But in this case will be Dal spots or Dalmatian. Spots can come out more. But with a Dal and non Dal pairing then all babies have a few usually. With 2 Dal parents all babies I’ve hatched have a lot! Big mama and spikes babies are covered already and were when born also. Where as when she was with Kaneki babies didn’t have a lot.
You can tell morphs from hatching/after first shed, we’ll atleast touch wood I’venever been wrong yet with my lot

First shed can take a day or 2 sometimes.

Most breeders have said first shed is usually next day but @ghoulishcresties is correct it could take a couple of days.

I think as unnamed is beautiful and shy, she would suit the name Belle. I love thinking of names for Reptiles, I can’t help but suggest as I’ve run out of my own reptiles to name

I’ve had some shed within an hour and others take 2 days. Just depends on him/her!

Naming can be hard, my daughter named Barb our recent girl because she’s mad on the Trolls movies! Wasn’t saying no as I love the movies also haha.
I think you’ll know when you know! I’m quite quick with names, I see them and I’m like you’re Kaneki for instance. But with my younger fat tail she took me around a week to decide on Taiga. And that’s from a show I like.
So what about any movies or programmes with characters you love?

Hopefully now you know her morph that may help you decide! Something beginning with T?… 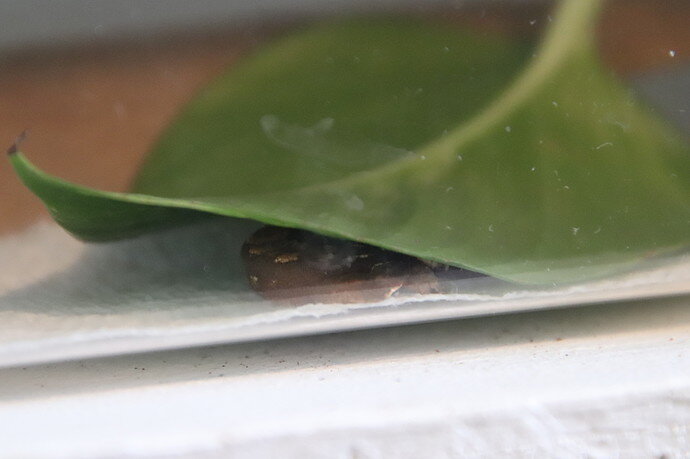 Don’t you find it amazing how small they are when they hatch! Even now I’m still in awe