Can anyone help me? My store just said “Designer”
But I picked him cus I thought he was the coolest looking one they had, and my son loved the way he looked to. Thank you For any responses 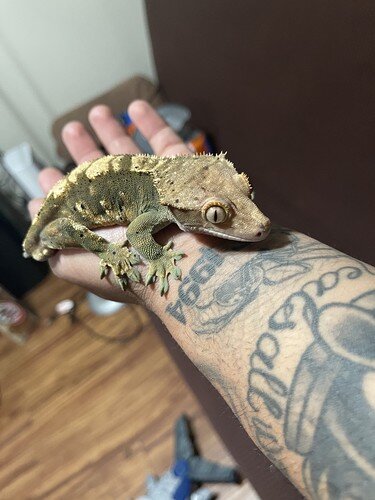 I’m terrible with crestie morphs, though I’m trying to learn. I have heard keepers calling cresties with no tail ‘frog butts,’ but I don’t know if that’s a commonly accepted term. Luckily @erie-herps & @westridge can bail me out.

Looks like he might be a flame or harlequin, maaaybe tri-color?
He doesn’t look fully fired but the head looks to be a different color than the markings on the body, and some of the body markings are two different colors as well. Not sure if that counts as a tri-color but I am also learning!

I’m certainly no pro at crested morphs either, I’m just now getting into them myself

I’d let other people give their input and take mine with a grain of salt.

I think it looks like a harlequin though I’m not an expert with them yet. And yes @mblaney they are called frogbutts

This is not a Harlequin, Tricolor or otherwise. There is nowhere near enough color on the sides. It is, in fact, a nice Flame.

Makes sense! I wasn’t 100% sure since again he doesn’t look to be fully fired up. My bad

Firing up affects the color greatly, but a Harlequin pattern will be visible even on an animal that is fired down.

Thank you all for your input! I’m happy to be apart of this commuting. And can’t wait to breed him and grow my crestie collection

Thank you! But could he be Dalmatian to? Because of his spots or do most flames have spots?

Yes, he is also a low-level Dalmatian. Dalmatian Flame.

Harlequin Dalmatian. Flames have less patterning on side or none. And none usually on feet either.
And going from his crests, looks furry too.

Flames do not have pattern on legs and feet. I have a few Harlequins and don’t have lots of patterning along the sides, while others have little like this one.

I can’t be certain on the furry, would need to see closer pics. Does the credit have lineage? That might help with the furry trait.

Please keep in mind that this isn’t a highly sought after morph (at the moment) so you may find you might be keeping a fair amount of the offspring at first. It’s still a cute Crestie!

Gotta love a good frogbum!
Was never keen myself, the other half brought lilo as one and I wasn’t mad on her. Then I got zombie and kinda love it now

Furry/fuzzy can just happen, don’t need lineage, We have 3 males here with it, corpse, spike (leaping) and Harold. 2 have unknown lineage. Same with our soft scales here, turns out big mama is passing it on so some lucky burggers out there have it without me saying anything as I didn’t care much for it years ago…

Other softs are breeding this year so will be checking and looping all now lol.
Same with the crowned etc. Though that helps if you’ve got a bigger headed gecko. Hoping Kaneki and Akira make some nice big heads!

And you’re correct, harleys aren’t sought after. So many people have them now as were the first morph about. Shame really, but just so common. I have never had a normal Harley because of that, only go for extremes myself.
If any come from my pairings (I shouldn’t have any) but if I do then will be sold on cheaper depending on lineage as just too many around that I know people won’t want them as much.
Though I have just sold a lil dark base drippy Harley pos extreme and her sister who’s an extreme tri partial pin to someone who fell in love with them both, so just shows it’s what you like yourself.

I totally agree, just depends who is looking and when.

Dalmations are quite sought after but everyone wants a plain base with a Dal.

his showing red spots now too.

Anymore of both sides?

From them,
Looking like an Extreme Harlequin Pinstripe Dalmatian. Almost solid back too which is cool! We have one here and they’re wicked!

From the pics I’d say: pinstripe, extreme, dal spots - I’m not sure there are enough to count as dalmation 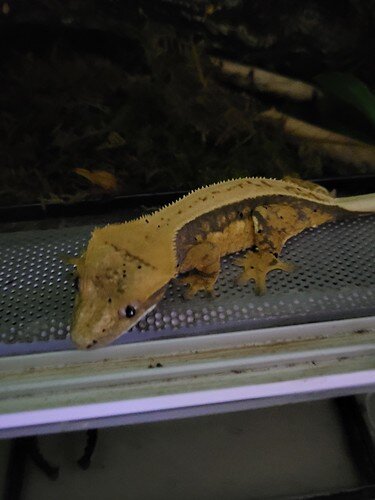