Im new to this forum and to ball pythons. Im married 41 years old and father of 2 daughters 14 and 17.

Long time ago when i was a teenager the father of my best friend kept snakes corns and balls. I was fasinated like alot of you might have been at some point. Thought about getting a snakes for some time even years later but never happened.

Few months ago my oldest daughter out of the blue started asking for a snake. I thought it was a joke but she was dead serious. Strange because i never brougth it up. It started my enthousiasm again and i got into reading about snakes and watched alot of You Tube video’s especially about Ball Pythons. I kinda got a little bit obsessed haha

Long story short 2 weeks ago we took home our first snake. A normal wild morph python which is really tame and 2 years old. Dunno if its a male or female. After the purchase i discovered morph market had an European market also and some nice breeders from Holland. I probably gone buy a few more balls in the future from here.

That brings my too my first question and thats my snake had his last meal 2 weeks before i bought it. Its used to get live mouse outside his enclosure. Feeding live mouse, is oke for me atm but ones setteled in i want to try switching to frozen mice/rats.

I left the snake alone for 1 week and tryed feeding live mice outside his enclosure which he was used too. Now 2 weeks passed and he hasnt been eating or even seems interested. I tryed feeding him inside his enclosure but only thing he wants i too lay in his hiding. My temps are 25-27 degrees and 30-32 inside the hiding. Humidity is 50 - 60%. I use heatmat underneat the hiding and a ceramic heat lamp ontop during daytime for the ambiant temp.

I think hes getting abit thinner now and im starting too worry a little. First few days hes was really active exploring and now totally different animal. I know some balls can be hard eaters and can go without food for some months but maybe you guys have some tips ??

I tryed feeding late in the evening. Normal mice and jumbo mice even tryed thawed small rat. When he refused i left him alone some days and tryed again but he doenst seem interested at all. Hope i can have some help.

Welcome Michel! We have alot of great information and people here available here to help with whatever questions or problems you may have. here is a great write up for help with non feeders. New owner with non feeding hatchling, troubleshooting 101 Even though this snake is older the information may help. also it may take awhile for older balls to adjust the new home environment and start feeding again. It may also not switch to f/t as readily due to it only eating live prior.

@potvisje welcome! You’re starting to experience the frustration that many ball python owners have over getting their snake to eat. I’d like to see some pictures of your enclosure before I make any suggestions. However, removing the snake to eat from it’s enclosure is likely hurting you more than helping.

Welcome to the family Michel

There is a lot to unpack in this introduction and I like it. I feel like you will get on extremely well here.

We enjoy hearing about peoples experiences as much as we like seeing their animals.

Few months ago my oldest daughter out of the blue started asking for a snake.

We have a whole thread dedicated to encouraging children to get involved … Junior herpers are the future, let’s see those kids with reptiles … if it wasn’t for a certain someone on here, one of my daughter’s would never have touched a snake at all, let alone cuddle up with boa constrictors like she does now.

A normal wild morph python which is really tame and 2 years old. Dunno if its a male or female

As much as you probably wish to find out the sex, I really recommend not attempting to sex it yourself.

At that age you will not only find it difficult because of the snakes size, you may also cause injury because of lack of experience. (If you have a local reptile store they will more than likely be happy to show you what you are doing and how to go about it.)

and some nice breeders from Holland

Some of the breeders in Holland are doing crazy work. You have access to some beautiful animals.

That brings my too my first question

As @hinglesherps has said, a picture of your set up will make any problem solving 100x easier. You will find some great tips in the link @wreckroomsnakes posted aswel, I recommend bookmarking that thread for the future.

Here is another thread that will help you out aswel… Switching snakes from live .

Again, welcome to the forum

Hi Hinglesherps, thank you for the reply. I will post a picture of my setup.

Hi Eaglereptiles, thanks for the kind reply and you took the time for it. 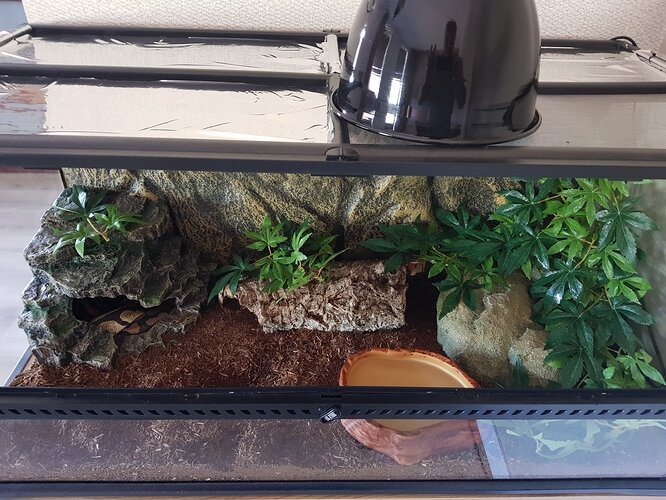 The problem i have with using the ceramic heatlamp a 50 watt is it makes humidity drop too low i think. Without it my temp inside the enclosure is around 22 - 23 degrees. And 60 humidity. During the night this isnt so bad i think. Maybe 1 or 2 degrees to cold.

What are your thoughts about this?

On the warm side is a heatmat 42 watt and the temps inside the hide are around 30-32° i use a thermostat on this. I bought one for the heatlamp also too stabilze the temp around 27. What you guys think about day and night temps do prefer keeping it the same ?

@potvisje at a minimum I would cover the exposed sides with a towel. That usually helps the snake to feel more secure.