Xenodermus javanicus, or the Dragon snake, is a small and unique species of Colubrid snake renowned for its unusual but fascinating appearance. Sometimes they will also exhibit a particularly interesting behavior when handled: they will stiffen their entire body, as if they were instantaneously frozen! While they have a more reclusive nature, they are incredible to observe when they come out during the night to hunt and explore.

The downside to keeping Dragon snakes is that they are not yet established in captivity, thus all available specimens are currently wild caught imports. If you are interested in keeping this species, it is highly recommended that you have at least some experience establishing wild caught imports. While a small handful of people have been successful in keeping Dragon snakes, due to their current status in captivity, this species is best suited for advanced keepers until established captive bred specimens are more readily available.

Dragon snakes seem to do best in smaller enclosures as it allows them to hunt for their food more securely. I have been keeping my Dragon snakes in 15qt. Sterilite locking tubs, regardless of age/size. I provide them with one hide that spans over three-fourths of the enclosure, a bit of artificial foliage for extra cover and a water dish that is designed to mimic a rock, which is kept under the hide at all times. It does seem important for the water dish to resemble a rock, as they use the edges to sturdy themselves as they hunt for their food in the water, as they would in the wild. My observations found that they do not seem inclined to do so with a plastic or ceramic water dish. I also highly suggest keeping the water dish under their hide; they do not like to venture out too far from the location where they feel most secure, and thus will not hunt as readily if the water dish is too far away. I have not had any feeding refusals from consistent eaters after I began keeping the water dish under their hide. It seems to be the little aspects of husbandry that matter most when keeping Dragon snakes.

Dragons snakes require consistently high humidity at all times and often spend a majority of their time underground. In order to satisfy their semi-fossorial (burrowing) nature and maintain humidity levels of 90%+, I prefer to use organic peat moss for substrate. It is crucial that you are not using a substrate that you must constantly modify by adding water to maintain humidity levels, as minimal interaction with this species is best to avoid additional stress. When using the peat moss, I will add two cups of water upon initial placement and then only mist once every week or two for a few seconds each time. Keep in mind that this particular substrate does mold a bit faster than other substrates, so be sure to maintain a sanitary environment and replace as necessary. Adding a drainage layer to allow for a more even distribution of moisture through the substrate is highly recommended to help maintain humidity.

Dragon snakes do not require external heat and should ideally be kept in a temperature-controlled room between 75-77°F. High temperatures are detrimental to this species, so do not overheat them! If your house is kept cool and you are unable to maintain a room temperature within this threshold, you can mount a 60W CHE (ceramic heat emitter) ABOVE the enclosure to meet their heating requirements. You will have to calibrate the temperatures by adjusting the height from the CHE to the enclosure, starting from the farthest distance and gradually moving closer as necessary. Always use a thermostat with any and all heat sources.

Feeding Dragon snakes is very straight-forward as long as they have settled in well. In the wild, their diet primarily consists of tadpoles, frogs and small fish. I have had the most success feeding tree frog tadpoles, which are readily available from various suppliers on eBay. The size of the tadpole depends on the size of your Dragon snake, but typically most fresh imports are of size to take medium - large sized tree frog tadpoles, which are easily offered by placing 3-5 tadpoles in the water dish every five days. You will want to keep the water in the dish as shallow as possible, allowing only enough water for the tadpoles to comfortably swim, otherwise they will jump out.

Since I have had the most success with this feeding method, I do not feed much else other than tadpoles to my Dragon snakes. I do occasionally feed developed tree frogs, but they are much more difficult for them to hunt because they will often find a comfortable spot at the top of the enclosure nestled right where the lip of lid meets the bin. This presents a bit of a challenge for Dragon snakes since they prefer to stay within the confines of their hide or underground. I have only had success feeding frogs when one would dare venture into their hide during their active hours. Frogs are also much more difficult to track and manage in the enclosure, which is problematic if you would like to confirm whether your Dragon snake ate or not. For these reasons, I recommend sticking to tadpoles as the primary feeder for this species, since you can conveniently confine them in the water dish for them to hunt with ease.

Lastly, one of the biggest concerns that comes with all wild caught snakes is the potential parasite load they often bring. I treat all wild caught snakes for internal parasites within a week upon arrival, and I immediately treat external parasites if they are present, as well. External parasites are easy to detect and relatively simple to treat, and there are various online resources on how to treat them – but the same cannot be said for internal parasites. Many inexperienced keepers that acquire a wild caught import believe the best course of action is to rush them to their veterinarian for an in-depth examination. Unfortunately, the stress they are put through as a result of the veterinary visit is often a major cause for decline and eventually death. When keeping wild caught snakes, it is crucial to avoid stressing them as much as possible, and this includes being poked, prodded and excessively handled by a vet. This is where experience comes into play. Knowing how to examine and identify potential issues with your snake and how to treat them without rushing them to the vet is extremely helpful in assuring the survival of such sensitive animals. In order to do so, I highly suggest establishing a good relationship with your herp veterinarian. I am able to treat all snakes for parasites at home because my veterinarian prescribes the medication via Telemedicine, allowing me to receive the necessary medication for my wild caught imports without having to put them through the stress of a long drive and physical examination.

Treatment for internal parasites includes an oral administration of Metronidazole (0.04mg/g) given once within the first week of arrival and then once more 2 weeks after the first dose. Since Metronidazole is typically prescribed in a 250mg tablet, it must first be dissolved in water to be administered to your snake. Your veterinarian can help you find the correct ratio in which you will dissolve the medication in, which will depend on the weight of your snake and dosage information provided above. For reference, dissolving one 250mg tablet of Metronidazole in 10ml of water would be administered at 0.04ml for a 25g Dragon snake.

I also treat each group of tadpoles for parasites a week prior to feeding them off. There is a product called “Fish Bendazole” which is Fenbendazole that you soak into the food for fish. I add half of the packet to every 2oz. of plant food used for tadpoles, let it soak for about 20 minutes per the package directions and then feed it to them as usual.

As with most wild caught imports, it is important to limit handling to only when medically necessary. I never handle my Dragon snakes for interaction or personal benefit. While this may change when captive bred status is obtained, for now it is best to avoid putting these snakes through any unnecessary stress. They are particularly fragile and will quickly decline under stress.

I also recommend keeping them in a dark or dimly lit room. I allow a small amount of natural light to peek indirectly through a window. Absolutely no artificial light sources; this is a semi-fossorial nocturnal species, and light should only be provided through natural means to help them regulate.

In summary, Dragon snakes are a fascinating species to keep for those who are capable of doing so. While they are best suited for advanced keepers due to their current status in captivity, I hope the information provided in this guide will help the small community of those who keep them in assuring they thrive in their care. With the persistent efforts of dedicated keepers, perhaps we will see more captive bred hatchlings in the future.

Such a bootiful snake

thanks for all the information and the lovely picture. Never heard much less seen one of these fellas before.

Thank you, I am happy to share! They are a very intriguing species, and we have a good feeling about captive breeding attempts in the near future. 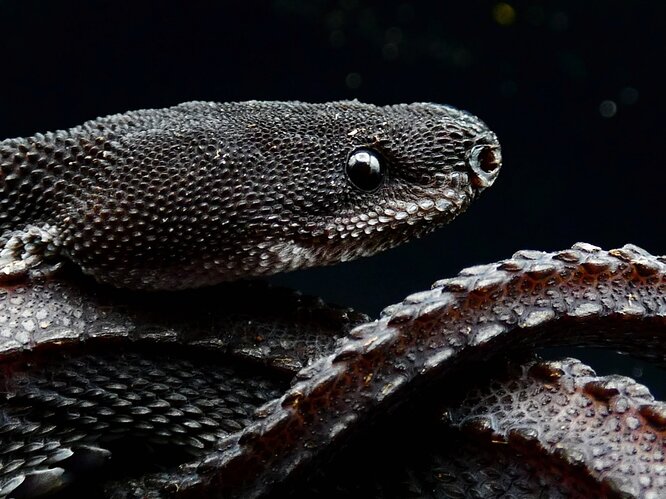 Man when I first got into reptiles these things drew me in like no other snake out there. I hope that captive bred specimens can be made, as taking them out of the wild when they are already endangered is worsening their chances.

I share the same concern. I do wish the sale of this species was more selective on the seller’s behalf. I have seen far too many keepers aquire them without enough experience to care for them properly; excessive handling, inadequate husbandry, and rushed trips to a (usually unqualified) veterinarian being a few of the mistakes made when keeping them. This species is very fragile – even for a wild caught import – which leaves very little room for mistakes. While I do foresee them being a pleasure to keep once captive bred specimens are available, for the time being, Xenodermus javanicus should be left to those who are accustomed to establishing them so that we can one day enjoy their precious existence in captivity.

What cool snakes. How many of them do you have? How long have they been in your care?

I currently have a group of 3.4 (three males, four females), with the longest captives being a little over two years old and thriving well.

I thought I would update this thread in regards to sexing Dragon snakes. I took these photos today to compare male and female X. javanicus by the ventral side of the tail. 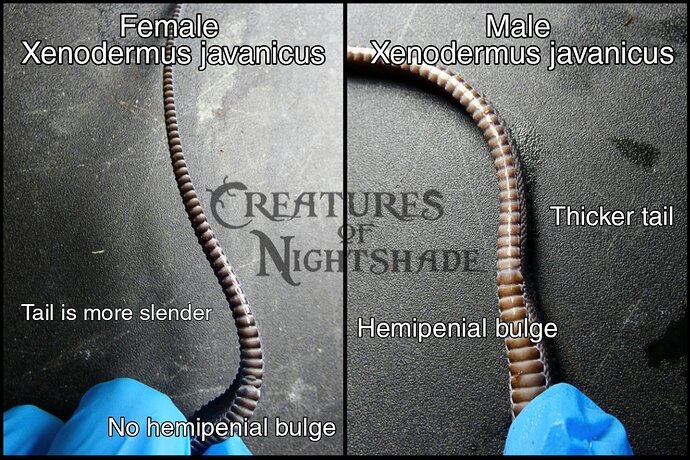 It is definitely not a hognose