Hi! One feature I would find useful in sorting through the Marketplace is a hybrid category. It would be hard to put in each group (where would you list an imperial Pueblan currently?) So 1 category where hybrid animals could be listed would be nice.

I understand that people have different criteria for defining a hybrid - some people believe all the designer morphs in carpet pythons make those animals hybrids. However, the carpet pythons can be listed by genes rather than species. That’s not currently an option for say, kingsnakes, where currently someone has listed a bunch of hybrid pastel kings as leonis with no mention of their hybrid nature.

If there was the option to place those animals in a hybrid category, shoppers like me could at least tell whether a breeder was purposefully mislisting animals. If the breeder had the option of a hybrid category and still didn’t use it, that tells me to avoid that breeder because they either lack knowledge about their animals or are dishonest. Right now there’s not a way to differentiate.

I assume you mean hybrid in the sense of say ratcorn or green tree pythob x carpet python, and not simply mixed subspecies (which fall into the “other” category) i think that would be a good idea to add a misc section for when a snake doesnt fall perfectly into any of the main groups. If you had a carpet x ball (i hear they exist) it would be difficult to choose whether to put them as a ball or a carpet, since they are neither as well as both.

Hi @gamcpherson, it’s a good topic. I agree that we have an opportunity for improvement here, since it’s unclear which of the “two” categories to put such an ad in. I haven’t yet come up with a good idea of where it would go. I guess ideally it’d go in both categories, but our system doesn’t permit that with categories.

The feature we have provided to deal with this is to add a Hybrid trait. So sellers can do what you are hoping for, which is indicate that they’re hybrids, if they are aware of this trait tag. 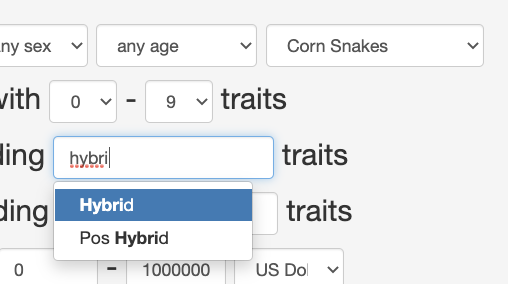