I’ve had a few people say lg and a few say just a platty? 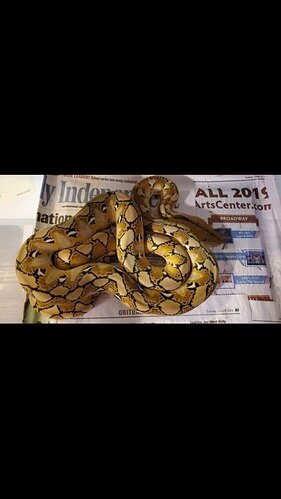 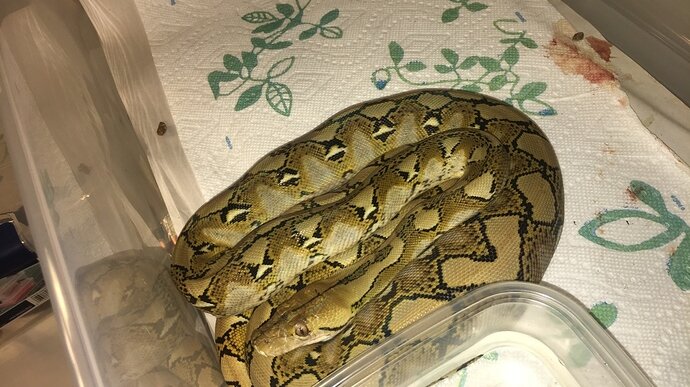 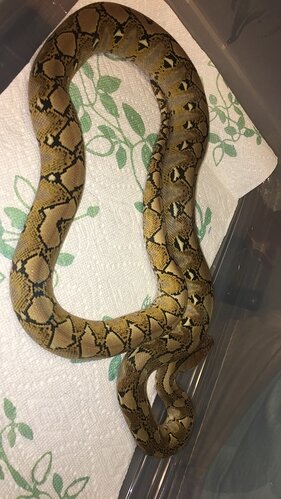 Platinum I believe, but was the snake fired up in those photos?

What exactly is platinum?

But which gene is platinum? Can it be both?

I believe Platinum was originally produced as a mainland morph. There was a new line produced by Reach out Reptiles this last year.
It’s a color enhancing gene, that brightens up with age.

Lemon glow I believe is a dominant trait, with the super being Black eyed lucy. I’m not 100% on that as research is hard to come by on that morph.

Fire is Platinum just another term.

I know they’re both Co-Doms.

But my understanding is that fire is Bob-Clark’s line, and is always the heterozygous form of ultra.

Lemon Glow is supposed to always be the heterozygous form of platinum.

Then it seems like platinum can be either gene?

Fire is the Clark line Platinum.
As far as the heterozygous topic of that argument, I haven’t done enough research on that to say.
Hopefully someone with more breeding knowledge on retics can weigh in.

Is there a Visual difference between black Lucies and ultras? I mean I know that cultures tend to have a yellow stripe going down their back, but the difference is that it’s super platinum versus super fire? So if the super forms of different wouldn’t that mean that the Single copies are different?

Totally.
Black Lucy’s are all white with jet black eyes.
Ultra’s are slightly white but usually more cream and yellowish.
Ivory is a Super Platinum and appears yellow as a hatchling and dulls out to a creamy yellow.
The thing that’s always confused me is I see Ultras labeled as Ultra Ivory’s. And I believe Ultra is recessive and Platinum is obviously co-dominate. So if Platinum is both how does that work? I’ve never read up on them really as I’ve never planned to work with either morph. I like Platinum but I think Ivory and Ultra just make ugly retics. Unless you add some more dominant morphs in them and I’m more a recessive guy so just haven’t invested the research to figure out the morphs.

OGS is one heck of a morph. And it comes from a dwarf local so they are usually a bit smaller too.
But if you want to talk about amazing morphs, Renick Ghost I think is the best besides Pied. And they don’t dull in color as they age like most morphs.
But now we’re getting off topic lol.

To be fair to Ultra and Ivory, I did see a Ultra Ivory Suntiger poss Motley SD/D about 2 years ago.
I wish I took a picture but my friend didn’t want people to know he had it.
That snake was lime green with a bleach white belly. Honestly the most breath taking retic I’ve ever seen, and I’ve never seen another to compare it to.

So what is really going on here

Very interesting. Nice research skills Riley!
No idea, hopefully someone with experience in these genes will weigh in.

What appears to be is like with the white and the purple albino that’s how you get ultra ivory. So it appears that lavender Albino would be an equivalent to ultra ivory. And platinum is essentially hat for ultra, and that lemon glow is hEt Black eyed Lucy

That’s what’s awesome about retics, so many untapped projects and people are still figuring out what these morphs can do.
Very cool, thank you for that info!

Wait…What I just described is there is a visual difference between platinum in lemonglows, Even though they can come from the same clutch. So does that mean when you buy a platinum it actually can be lemonglows? And if so, they can only be proven by making their individual super forms through breeding. And then you will know if you have a platinum and a lemon glow or just one of the same, right? I love thinking about genetics they’re awesome

I would believe so if the research you did is correct. And breeding would be the only way to prove what “line” of platinum it is.
Yeah genetics discussion is awesome! So much to keep up with and not easy to find all the answers.